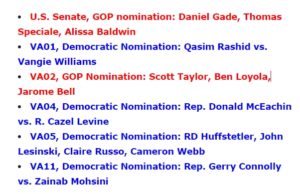 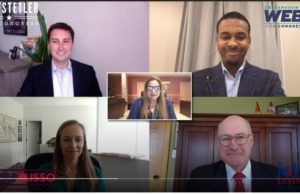 Virginia Primary Day 2020 Preview: What to Look Out For Tuesday

lowkell - June 22, 2020 3
Tomorrow, two weeks after the originally scheduled date due to COVID-19, Virginia will hold a GOP primaries for U.S. Senate, and for U.S. House... 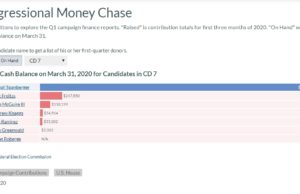 lowkell - April 16, 2020 6
See below for the latest campaign finance numbers, courtesy of the ProPublica FEC database and the godawful FEC website (needs *major* upgrades), for the U.S.... 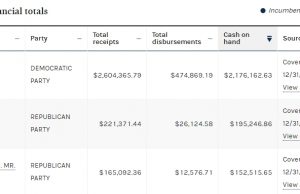 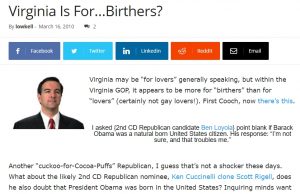 Republican Senator Frank Wagner (VA-7th) announced the obvious last evening: we have an environmental disaster. Virginia offshore drilling's strongest advocate averred that for now "...quite frankly I do not want to come in front of you here and promote it." At least until the ink on investigation is dry.

"I will tell you that when this investigation is complete you are going to find out that equipment wasn't maintained properly, warning signs were ignored...and it was a corporate attitude of profits over safety...and you're also going to find lax government oversight over the inspections..."

Wagner called for three things that must happen: 1) they have to get it plugged, 2) capture as much oil as they can, and 3) clean up. He called for a thorough investigation and speculated that as with most JAG investigations he has been involved with (and he elicited Ben Loyola's concurrence), inevitably there is not one mistake, but a series of mistakes that reflects an attitude within the command that allowed the accident to happen.

"People are saying, can't you just plug this?...I don't think you have any idea what it is like working 500 feet under the water, much less 5000...I can assure you that BP, and not just BP but every other major oil company who has equipment...has offered it to bring every resource to bear because all of them have as much to lose as BP..."

Virginia Republican Party Chairman Pat Mullins sees the opportunity for Virginia to help "take our country back." At the monthly meeting of the Virginia Beach unit last evening, he called for members to give money, work the polls, go door to door, and lick envelopes. He worked the Pelosi theme.

"This year we have the possibility here in Virginia of picking up two to four Congressional seats. That's ten percent of what we need to take our country back from President Obama and Nancy Pelosi." - Mullins

Referring to the second congressional district race, Mullins stated that Glenn Nye has gotten a pass for the last year. Mullins claims that Nye has been told by the Speaker of the House that if he needs to vote a certain way to keep his seat, he should vote that way. The message is clear and the message is pliable: the focus will be on Speaker Pelosi. For a Congressman like Tom Perriello the criticism will certainly be that he is Pelosi's lapdog.

"If he gets elected again, just as he was elected two years ago, his very first vote will be what his very first vote was the last time. And, that's to elect Nancy Pelosi the Speaker of the House. So if you all like what's happening in Washington, you like Obama's policies, if you like the way Pelosi ramrods stuff through that nobody else wants, then go ahead and vote for Congressman Nye (substitute any Democratic Candidate here) because he'll be voting for Nancy Pelosi as Speaker." - Mullins

That Mullins made the effort to attend the RPVB monthly meeting may signal that the party smells an opportunity. But is he also concerned about local unity after a contentious primary? The Republican candidate, Scott Rigell was not there; he is on vacation. The runner-up in the primary, Ben Loyola, was.

While the 2nd Congressional District establishment candidate sits back and anticpates victory Tuesday, his opponents make every effort to attract voters at the margin. This Republican primary features two retired military flag grade officers, each trying to out Curtis LeMay each other. Only one of the six candidates hasn't "served."

Yesterday was a bit telling outside the weekly Virginia Beach Republican breakfast meeting. Apparently only one candidate's campaign considers the battle within the party still joined. The local committee chose a subject less controversial by featuring Philip Shucet (President/CEO of Hampton Roads Transit) inside. Good there is so much military experience among the aspiring nominees because this group crossed the Rubicon long ago in this campaign. Most of the others are focusing on supporters variously aligned with the local taxpayer alliance, libertarians, and/or tea partiers. And all of them, bar one, have spent much of the campaign trying to close with and destroy Scott Rigell, the McDonnell candidate. Meanwhile the committee's last chair, Kenny Golden has parted their company to run as an independent.

Bert Mizusawa has released a bevy of negative ads focusing on Rigell, prominently featuring the metamorphisis of rationalization offered for his donation to President Obama's campaign; from inspired by the campaign to trying to defeat Hillary. Ben Loyola has claimed the mantle of fiscal conservative, signing a no tax pledge and receiving the endorsement of the local tea party. The others are curious in their own right. It should be interesting to review the campaign finance reports on each and every one. Ed Maulbeck told Tony Macrini last week that the contributions have been flowing in of late; that to now there had been people "stuffing money in his pockets," but he had not made a concerted effort to raise funds. The one candidate that hasn't connected with the outliers is Jessica Sandlin whose resume actually seems to embody the much vaunted Republican "family values."

What is certain is that come Tuesday night, the Republican nominee will be damaged goods. Scott Rigell's campaign has been smart to avoid joining the fray. It has focused on his professional and personal accomplishments and the support of Bob McDonnell. But for most, bridges have been burned come a Rigell victory. And fuel will be added to the fire over the next two days. Tuesday night, the strident and motivated "conservatives" will not have a champion; or, Congressman Nye will face an opponent who stands at the fringe of electability.