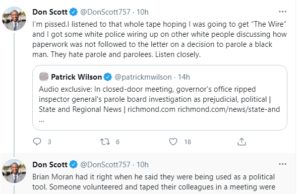 After Listening to Audio of 71-Minute Meeting on Virginia Parole Board,...

lowkell - April 18, 2021 0
You might not see much coverage in the Richmond Times-Dispatch of about a million important topics, but one thing they're highly focused on is...

A Siegel - November 29, 2018 6
The Richmond Times Dispatch is the Commonwealth's capital's local rag. It is the rag perhaps most likely to be on the desk of government...

The Richmond Times Dispatch demonstrates its disdain for energy efficiency &...

A recent "report" in the Richmond Times Dispatch stating that Dominion Virginia Power's conservation programs will raise power rates for Virginians by 34 cents disregards the $1.32 extra that Dominion's Virginia ratepayers will have to fork over to pay for a new coal plant in Wise County, euphemistically dubbed the Virginia City Hybrid Energy Center. That is, Dominion's residential ratepayers in Virginia will be paying nearly four times as much on their monthly utility bill for a new coal plant as for energy efficiency.

With coal as a rapidly declining source of energy for Virginians, as for Americans in general, and an indisputable source of greenhouse gases and toxic pollutants, the headline should have made hay over the inexcusable construction of another coal-fired power plant in the commonwealth and the subsequent financial toll it will make on Virginia's ratepayers.

Dominion's new energy efficiency programs are a win-win for Dominion, its customers, and Virginia, not a new coal plant in Wise County that costs nearly four times as much as energy efficiency. That's the real headline.

First it was minority and elderly voters, then women, and then the environment. Ok, maybe the environment has been on the GOP hit list for some time now. Oh yea, there are also those minorities...

But given the Richmond Times Dispatch's obvious sympathy with wannabe U.S. Senator George Allen's attacks aimed at the U.S. Environmental Protection Agency for releasing new carbon dioxide emissions limits for new coal-fired plants created to protect public health and mitigate further global warming, it stands to reason why anyone would want to retain coal as a source of energy in Virginia given its scientifically documented detrimental health and environment effects.

In the case of George Allen, the answer is clear. Allen is as much a tool of the fossil fuel industry as the shovel is the tool of a digger.

The motives of the Richmond Times are not so clear-cut, if for no other reason than the money that backs the newspaper is not as readily transparent as that which backs George Allen. But if we give writers for the Richmond Times the benefit of a doubt and assume that they are half-way intelligent, then their simplistic logical connections (more carbon regulations will necessarily result in the devastation of particular parts of Virginia's economy!) seem influenced by something other than a mere lack of intelligence.

Localities Brace For Even More Budget Cuts From “Pass the Buck”...

The Richmond Times Dispatch reports that Virginia's localities are bracing for more budget cuts and even less support from the state government. With Governor McDonnell still unable to find funding, he is continuing to shirk responsibility and pass the burden from the state down to the local level. Chesterfield is one such locality:

"Education funding is especially worrisome to Chesterfield officials, who don't know what to expect from McDonnell and the General Assembly.

For example, localities are wary about state discussion of possibly requiring counties to maintain their secondary roads, using money from state maintenance funds for cities and towns.

And they're concerned about funding of the retirement plan for teachers, which has dropped below 60 percent in its funded status as the state deferred hundreds of millions of dollars in contributions last year in order to balance the budget."

The Richmond Times Dispatch's Jeff Shapiro attempts to analyze a 2012 rematch of Senator Jim Webb and former Senator George Allen today. If what he opines is true, Allen should stay away from a rematch. The problem is, at least for criminal sentencing, he doesn't get Webb much at all.

Sadly, Shapiro either has ignored Webb on the issue of our criminal justice system or doesn't understand the sorry state of a society that locks away too many who haven't conformed. It seems that he believes Webb's focus on this issue is simply a self-serving effort to attract minority voters with the lure of a shameful situation that disproportionately affects African-Americans and other minorities. Well Jeff, that Webb is a wily one. Years and years ago he studied and visited Japanese criminal justice and prisons because he knew that one day he would need to use incarceration as an issue in his reelection campaign against an ethnically bewildered opponent.

That Webb is "a distant brooder who is schmooze-challenged as a candidate" can't be argued. He is not going to win by glad-handing. The Senator will have to rely upon his record. So for the other side, it is important to discredit or diminish his accomplishments in office. Criminal sentencing is one that can be twisted, particularly by a no shades of gray, law and order advocate like Allen. About the only accomplishment that will be off the table might be the GI Bill. So to win, Webb's campaign will have to develop a clear theme of commonsense populist action to counter the misrepresentations.

Actually, it is difficult to be certain of Shapiro's argument until the very end of his piece where it sort of falls into place. Shapiro seems to think that Webb would win in a rematch because Webb is the lesser of two evils for African-American voters. The "macaca moment," for Shapiro, is the fulcrum that will give Webb the advantage. Shapiro misattributes the Chinese proverb "The enemy of my enemy is my friend" to explain why Webb would draw some of the motivated Obama voters. But it may be Allen himself who pulls the plug on a race against Webb. There are many other reasons to vote for Webb over Allen or any other; Webb just has to get them out there.