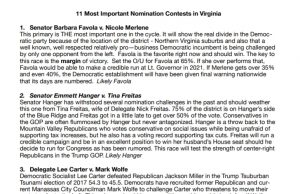 lowkell - April 14, 2019 1
I just got the following in my inbox from former Del. Chris Saxman (R) of Virginia FREE. a pro-business, STRONGLY Republican-leaning group (e.g., check...

Taking the Reverse of the New “Virginia FREE” Rankings is Far...

lowkell - August 18, 2016 3
I'm sure you're all as excited as I am to know that rankings by pro-business group "Virginia FREE" for the 2016 Virginia General Assembly...

Defective Chinese Drywall and No Autism Protection Are “Pro Business”? 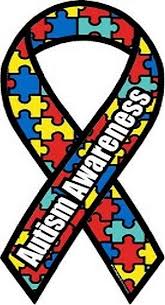 I received the following email from a Virginia politico who prefers to remain anonymous, but asked me to post this. I have done so, with a few minor edits for grammar, punctuation, and to protect his or her identity. Needless to say, I strongly agree with what's written here about the group known as Virginia FREE ("FREE" stands for "Foundation for Research and Economic Education").  For an idea how influential and powerful this group is, click here to read about how "more than a third (35.9%) of all campaign dollars raised by incumbent state legislators in the 2007 cycle came from VAFREE members."  In contrast, "This compares to 3% from the trial lawyers and 1% from organized labor." That's right, the bogeymen of "trial lawyers" and "unions" accounted for a combined 4% of Virginia campaign dollars in 2007, compared to 36% - 9 times that amount - from Virginia FREE. Just keep that in mind as you read the following, most excellent, rant. Also keep it in mind as you peruse Virginia FREE's annual rankings of legislators. Actually, given the following information, it might make a lot more sense to flip those rankings upside down.

Virginia FREE also, of course, opposed a bill that would have allowed non-violent criminals to have their records expunged after a certain number of years and under certain conditions. Here is the link to their scorecard (the bills they used to compile it are in Appendix B.)

I think this is outrageous and they ought to be called on it. It is ridiculous to think that having dirty air and water, insufficient (or non-existent) coverage for disabled children create a good and strong business climate. I would hope that we believe that Virginians are fairer and smarter than that and recognize the value of a good environment.

It is really sad that Virginia FREE sees disparaging the environment as the best business climate. To the contrary, of course, a cleaner, more energy efficient Virginia is actually better for business and job creation. Moreover, creating an environmentally improved Virginia will also lead to green jobs. Certainly, allowing autistic children to receive therapy so they can grow up to be productive constructive citizens (who can be part of a skilled workforce and pay their fair share instead of being a cost to the state) ought to be seen as a worthwhile investment (not to mention basic human decency). Part of having a successful business climate, it would seem to me, is having good quality of life so that employees want to be here and so you can attract a skilled workforce. All the things they have opposed ignore that and, frankly, are contrary to that.

I am furious that Virginia FREE can get away with this. I am also furious that the "mainstream media" just publishes the scores and describe Virginia FREE as a "pro-business" group. So, feel free (bad pun) to ignore this, but I thought you and your readers might feel some of the same righteous indignation that I do.