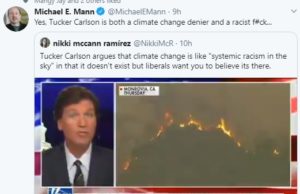 lowkell - September 12, 2020 0
by Lowell Here are a few national and Virginia news headlines, political and otherwise, for Saturday, September 12. Earth barreling toward 'Hothouse' state not seen... 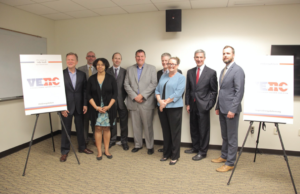 Time to Clean Up “Clean Virginia?”

Blue Virginia - July 25, 2020 3
The following is a guest post from someone who prefers that their name not be used. But it's hard to disagree with any of... 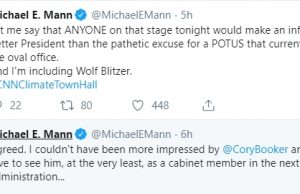 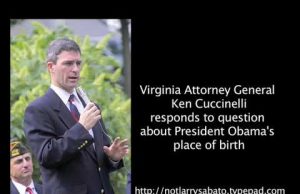 lowkell - August 17, 2019 0
In recent weeks, a good chunk of the American press corps appears to have just discovered the nightmare we've known about in Virginia for...

lowkell - June 16, 2019 1
by Lowell Here are a few national and Virginia news headlines, political and otherwise, for Sunday, June 16. Protesters Fill the Streets of Hong Kong...

lowkell - July 11, 2017 0
World-renowned climate scientist Michael Mann, author of The Hockey Stick and the Climate Wars, against whom Ken Cuccinelli pursued an anti-science witch hunt regarding...

lowkell - June 2, 2017 0
I'm really glad to see this (see below for an email from the Perriello campaign about former UVA professor and leading climate scientist Michael...

The Republican war on science faces a new counterattack - a libel lawsuit filed by climate scientist Michael Mann against the National Review and Competitive Enterprise Institute. From Mann's Facebook page:

Dr. Mann, a Professor and Director of the Earth System Science Center at Pennsylvania State University, has instituted this lawsuit against the two organizations, along with two of their authors, based upon their false and defamatory statements accusing him of academic fraud and comparing him to a convicted child molester, Jerry Sandusky. [...]

In response to these types of accusations, the U.S. Environmental Protection Agency, the National Science Foundation and seven other organizations have conducted investigations into Dr. Mann's work, finding any and all allegations of academic fraud to be baseless. Every investigation-and every replication of Mann's work-has concluded that his research and conclusions were properly conducted and fairly presented.

Despite their knowledge of the results of these many investigations, the defendants have nevertheless accused Dr. Mann of academic fraud and have maliciously attacked his personal reputation with the knowingly false comparison to a child molester. The conduct of the defendants is outrageous, and Dr. Mann will be seeking judgment for both compensatory and punitive damages.

Virginia Attorney General Ken Cuccinelli clumsy attempt at "investigating" Dr. Mann's work was laughed out of court. Mann has been contemplating a lawsuit for months and is now moving forward, so he must feel he has a much stronger legal case than science's hapless enemies.

Who Let the Kook Out of His Cuckoo’s Nest?

Ken Cuccinelli's opinionated hammer came down forcefully the other day when he claimed that there's a "50-50" chance  that Virginia's unnecessary voter identification bills will pass the muster of review by the U.S. Department of Justice. Given Kookinelli's recent track record, buyers of this conclusion beware.

Cuccinelli also thought that his crusade against Michael Mann and his climate science would succeed as well. The Virginia Supreme Court ruled otherwise.

But what the gun-slinging and crusading of Cuccinelli has revealed is a man whose conceit is unbounded, even by political standards.

Cuccinelli went on to claim that "This president [President Obama] and his administration are the biggest law breakers to run the federal government in our lifetimes." Did the George W. Bush administration already drop from Cuccinelli's memory? What an incredible statement!