lowkell - November 14, 2018 5
At this point, I guess I'm more sad and disappointed about Jim Webb than anything else. I mean, this was a guy who inspired...

lowkell - February 23, 2018 0
Great work by Rep. Donald McEachin (D-VA04) as usual - do NOT allow oil drilling off Virginia's coast under any circumstances. McEachin Questioned BOEM at...

Thursday News: “We’re at a Crossroads in Our Democracy”; McAuliffe Went...

VA Sierra Club: “Trump’s reckless plan for a drilling ‘do over’... 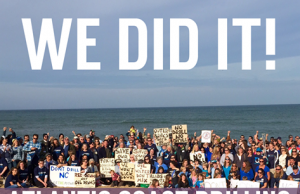 lowkell - February 8, 2016 0
I'm glad to hear this, as an oil spill in the Arctic would be a catastrophe, and an oil spill off Virginia's coast could...

The federal Bureau of Ocean Energy Management (BOEM) has proposed a draft plan for Atlantic offshore drilling that includes drilling off the Virginia coast.  Next week they are holding two Open House meetings in/near Virginia to which the public is encouraged to attend, learn more and ask questions.

BOEM has also opened up a public comment period (deadline March 30) on its oil and gas development plan.  Click here to send them a message saying "No" to Atlantic drilling.

What has changed since the 2010 Gulf oil disaster that would now allow the Atlantic to be opened up for offshore drilling?