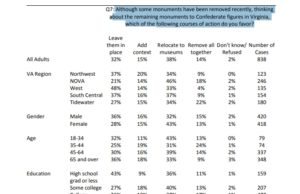 lowkell - July 30, 2020 0
Polling on Virginia has been pretty sparse the past few months, but we're finally starting to get some. Yesterday, a poll came out from... 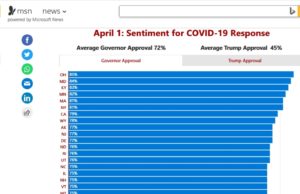 lowkell - April 10, 2020 0
How is Virginia Gov. Ralph Northam doing in terms of approval ratings at this point, both relative to other governors and also relative to... 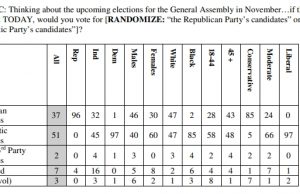 lowkell - October 28, 2019 4
With only 192 hours until polls open next Tuesday, CNU's Wason Center for Public Policy is out with new Virginia polling this morning, which... 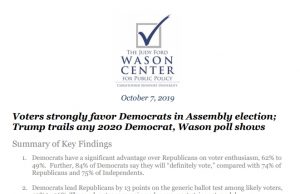 New Wason Center Poll: With 29 Days to Go Until Virginia...

lowkell - October 7, 2019 9
A new Virginia poll is out this morning from the Wason Center for Public Policy at CNU. Here are the results. "Democrats have a...

lowkell - August 23, 2018 0
While neo-Confederate Corey "Trump Mini-Me" Stewart spends his days (and nights) campaigning by himself (since no other Virginia Republicans want to be seen with...

So How Did the Pollsters, Predictors Do Last Night: Ranking from...

If Q-Poll Is Correct, Dems Are in For a Helluva Night... 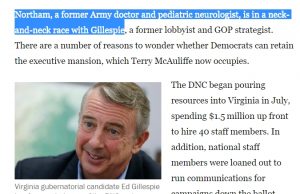 Wherein the WaPo’s Right Hand Doesn’t Know (or Care) What the...

lowkell - October 23, 2017 3
Can someone please explain to me how the Washington Post's own polling shows Ralph Northam up 13 points (note: I don't believe Northam's really...

I know, the Pants-on-Fire GOP barrage is getting old. It may even have gotten you down.  Who could blame you?  The lies have been coming so quicly, it's hard to have the airtime to refute them all. That's by design. GOP spokespersons and candidates are just throwing XXXX at the wall and hoping some sticks.

Having no ideas, except budget busting tax cuts and failed trickle-down economics, at this point, the GOP cares only about winning at any cost. And already tracking as the biggest liar ever to run for president, Romney deserves unfavorability even higher than 49%. Put another way, half of Americans have a negative view of him. That data point makes me feel a bit better. But, despite  that, I still have been dispirited.

And then I thought, hmmm, I'll see what Intrade has to say. And it brought a smile to my face.  InTrade says there's a 55.6% Obama will win. Then, I went to Nate Silver's site 538.  And the news was even better. Before I say the number, remember how well Intrade and Nate Silver have predicted the last presidential election. They did better than the "polls." So, with that, here 'tis (below the fold):