I just got off a conference call with a coalition of environmental and social justice groups who this morning releases “a first-of-its-kind report card rating Governor Terry McAuliffe and his record on climate change and clean energy issues.” According to the press release, the report “will show that Governor McAuliffe’s actions in office thus far fall alarmingly short of his promises as a candidate and of the leadership Virginia needs, especially as climate disruption accelerates and harms the health and economic security of communities across the commonwealth.” Also, McAuliffe’s grades “encompass five categories, accounting for his administration’s actions on new fossil fuel infrastructure (including pipelines), coal ash, clean energy, sea-level rise and flooding impacts, and the federal Clean Power Plan.”

Speakers on the conference call included:

To read the report, click here. See below for a few screen shots. Also, here are a few more key points made by speakers.

Yours truly asked a question about an issue not touched upon in this report — fossil fuel divestment, which McAuliffe a year ago said was NOT his role to get involved with. Cross noted the University of Mary Washington recently divested, which was an “exciting win.” She added that “the broader political climate is moving and McAuliffe is falling behind.” Tidwell said it would be hard to see McAuliffe getting “anything other than a failing grade on [this issue].” Naujoks asked, “if [McAuliffe] is a ‘fiscal conservative’…why isn’t he…looking where the markets are heading…global investments in renewable energy have now surpassed investments in fossil fuels…that’s where the market is going,” so if he really is fiscally conservative, he should be investing in renewable energy and divesting from fossil fuels. 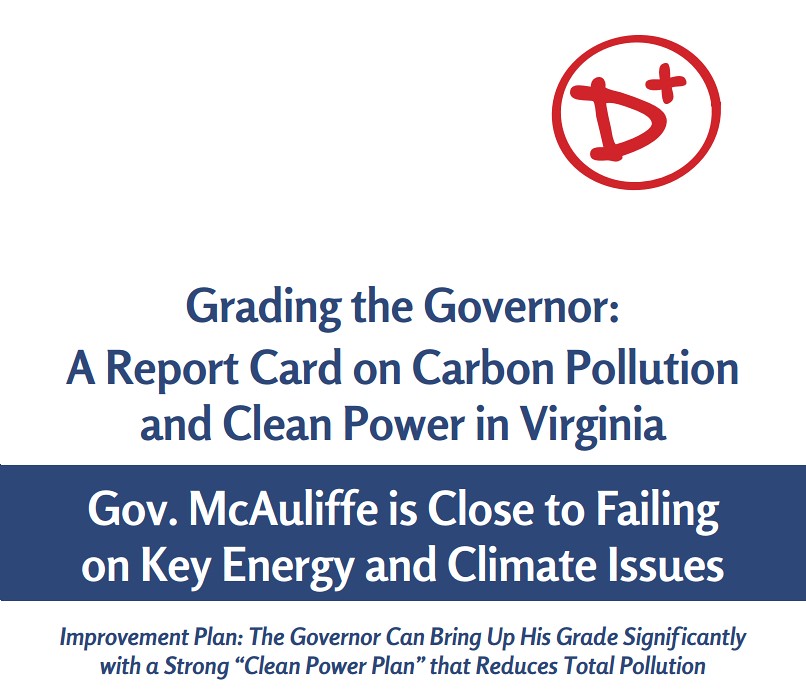 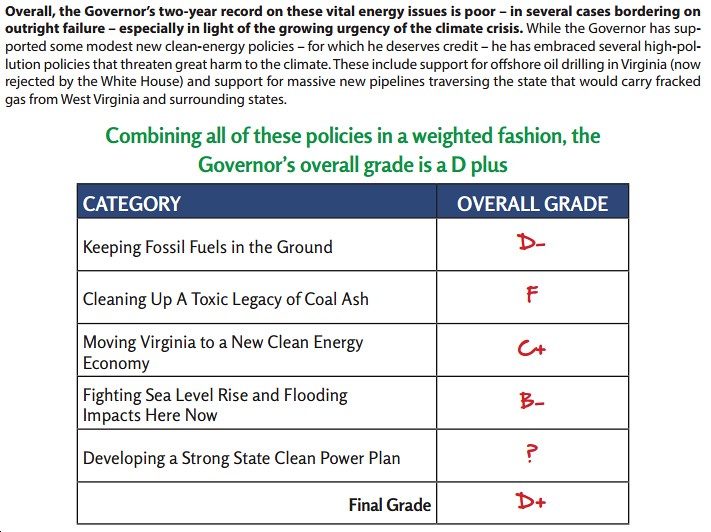 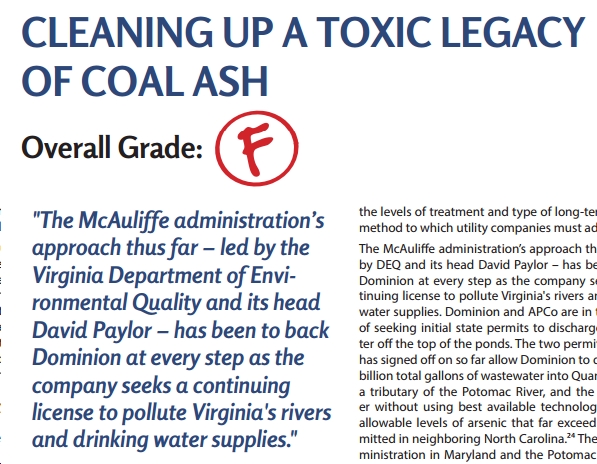 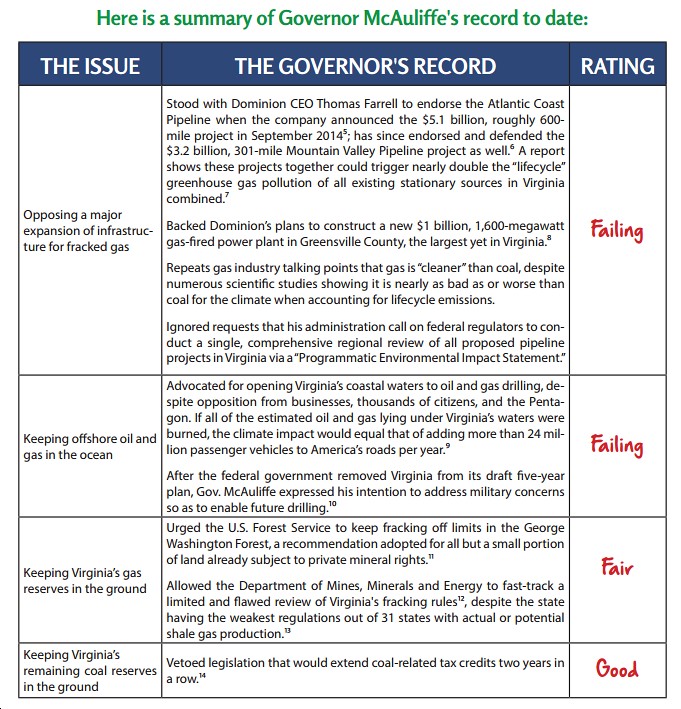 P.S. I just received the press release from this conference call. See below.

The high-pollution impact of the Governor’s support for fossil fuels threatens to overshadow his modest steps forward to spur clean energy and to address sea-level rise, the groups warn.

“When coastal Virginia is flooding at ‘normal’ high tide, we’re out of time for Governor McAuliffe’s ‘one step forward, two steps back’ approach,” said Mike Tidwell, director of the Chesapeake Climate Action Network. “Climate leadership, at its core, means keeping fossil fuels in the ground, not lobbying for decades more reliance on fracked gas and offshore oil drilling. In this regard, the Governor has failed the climate, and the health and safety of Virginians, in a major way.”

Leaders with the Potomac Riverkeeper Network and landowners fighting the Atlantic Coast and Mountain Valley Pipelines joined a tele-press conference this morning.

“Governor McAuliffe gets a double ‘F’ on coal ash just like his name. His administration has failed to protect its citizens by giving Dominion virtually a free license to pollute our rivers and drinking water. His regulatory agency has totally failed to provide any meaningful oversight of Dominion,” said Dean Naujoks, Potomac Riverkeeper. “Virginia’s chief regulator, David Paylor, has acted as a partner to Dominion, joining Dominion on a lavish golf trip before covering up a 27.5 million gallon coal ash wastewater dump into the Potomac River. Yet, the Governor has done nothing to rectify the situation.”

The groups give Governor McAuliffe an “incomplete” for his response to the federal “Clean Power Plan,” which they cite as the Governor’s biggest opportunity to transform his record.“Virginia Organizing is committed to clean energy to create new jobs and, most importantly, to protect our precious natural resources,” said LaDelle McWhorter, Chairperson of Virginia Organizing. “It is time for Governor Terry McAuliffe to take action and for that action to be in the interest of the people of Virginia, not those who represent the big polluters.”

Governor McAuliffe has sole authority to prepare a state plan to implement the federal rules, which are designed to reduce carbon pollution from power plants. Previously, McAuliffe lobbied with the state’s largest utility company, Dominion Virginia Power, to lower Virginia’s requirements. His design of a state plan could either fully embrace clean energy or allow Dominion to invest in more polluting gas and increase carbon emissions for years to come.

“Climate change presents an urgent moral challenge to Governor McAuliffe and all people of goodwill across the Commonwealth,” said Joelle Novey, director of Interfaith Power & Light (MD.DC.NoVA). “Virginia’s faith communities are already doing everything they can to shift to cleaner power, and today we call on Governor McAuliffe to follow our lead by developing a strong ‘Clean Power Plan’ that faithfully lowers pollution using real solutions: solar, wind and efficiency. We all are called to act on climate for the sake of our neighbors and future generations.”

“Governor McAuliffe has so far abandoned landowners like me, as we fight to protect our natural heritage and homes from multi-billion dollar corporations and a derelict federal agency,” said Scott Ballin, an Augusta County landowner whose home lies in the path of the Atlantic Coast Pipeline. “By joining calls for a combined regional pipeline review, and denying state water permits, Governor McAuliffe could yet become an ally.”

“The Governor’s support of fracked gas pipelines and infrastructure that blasts through venerable mountain forests, sullying streams, creeks and groundwater and destroying whole watersheds in its path to export terminals, is extremely short sighted,” said Roberta Bondurant, a long-time Bent Mountain resident and a member of POWHR (Protect Our Water, Heritage, and Rights) and Preserve Roanoke/Bent Mountain, groups fighting the proposed Mountain Valley Pipeline. “Among those in the pipeline opposition is a cadre of incredibly capable and talented environmental and energy scientists, and the Governor should avail himself of their experience and wisdom to protect our water resources. He has the opportunity, in the Clean Power Plan, to establish his legacy of renewable energy. We encourage him to seize it.”

A concern repeated throughout the report is the role of Dominion—the largest non-party campaign donor and largest climate polluter in Virginia—in influencing the McAuliffe administration’s policies.