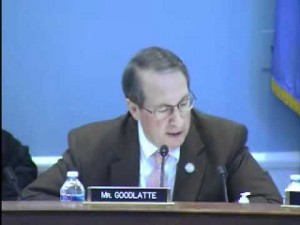 This piece will be running in the major newspapers in the 6th congressional district, which Mr. Goodlatte represents in the U.S. Congress.

If there’s one thing people can count on you for, it’s that you will put your party’s interests ahead of the good of the nation. Fortunately, there’s something you can do now to redeem yourself.

You probably knew there would be no indictment, since most legal authorities had reached that same conclusion. And surely you know that Mr. Comey — appointee of George W. Bush, and contributor to the presidential campaigns of McCain and Romney – has no partisan motive to help the presumptive Democratic nominee for president.

But as the obedient servant of the Republican Party, which has rewarded you with the chairmanship of the House Judiciary Committee, you sprang into action to keep the public’s attention focused on Hillary Clinton’s shortcomings

With your colleagues’ efforts to find a scandal in Benghazi having failed — and even exposed as politically motivated — it’s not surprising that your party would not let go of the email issue, where Hillary made some clearly bad choices.

But all your efforts to besmirch Hillary can do is help make Donald Trump president. If you think he’s fit to be president, let’s hear you make that case. And if you don’t, are you such a partisan that you’d help elect someone — whom leading Republicans have called a con man, a fraud, a purveyor of bigotry – simply because he’s the Republican nominee?

Too bad you’re not as eager to move forward on national issues needing attention. Instead, again doing your party’s bidding, you’ve made your committee the place where bills go to die.

No action on immigration reform, letting the problem fester, even though the measure that passed the Senate with a two-thirds vote would pass the House if it were brought to the floor for a vote;

And no action on sensible gun restrictions, even though gun-related deaths in the U.S. are 25 times as great as in other nations, and even though some measures you refuse to move forward are supported by big majorities even of NRA members.

You’ve been a foot-soldier advancing your party’s strategy of across-the-board obstructionism. “If the president was for it, we were supposed to be against it,” were the marching orders, according to former Republican Senator from Ohio, George Voinovich.

Those marching orders –- which you’ve followed consistently — are fundamentally un-American.

Not for a moment would America’s founders have considered it legitimate for the people’s representatives to put making the president fail, in order to gain partisan advantage, ahead of doing the people’s business. This obstructionism is a betrayal of our founders’ vision for America.

Your party has now taken this obstructionism to a new level: refusing to allow a president to appoint anyone to fill a Supreme Court vacancy.

It could not be clearer that this Republican blockade is purely about partisan power. All the justifications offered were readily shown to be hollow. And all the precedents cited were not comparable.

Throughout American history, there have been 103 instances like the present one, according to a study by law professors at the University of Chicago and the University of Illinois. And “in all 103 cases, the president was able to both nominate and appoint a replacement justice, by and with the advice and consent of the Senate.”

Surely, Merrick Garland should now be on the court. He has been nominated by a sitting president in a timely way and is by all accounts an exemplary judge in every way — professionally and personally — that American tradition has considered relevant to confirmation. (Beyond which, Judge Garland is ideologically moderate.)

Your party’s obstruction threatens America’s future by degrading the norms created by generations of American lawmakers.

But you can redeem yourself. You are the counterpart to the chairman of the Senate Judiciary Committee—Senator Grassley, who has spearheaded this unprecedented obstructionism. This gives you standing to write an open letter calling for him to at last put nation above party, saying:

“We Republicans have politicized the court enough. It’s not right to help our party in the short run by setting a precedent that can damage America in the long run. It’s time to do what every Senate has done before in this situation: hold hearings and, if the nominee proves to be qualified, confirm him. Our system works only if we all accept that sometimes things don’t go our way.”

It’s time for you, Mr. Goodlatte, to put country ahead of party.

Andy Schmookler – Mr. Goodlatte’s Democratic opponent in the 2012 election – is the author of WHAT WE’RE UP AGAINST: The Destructive Force at Work in Our World—and How We Can Defeat It.