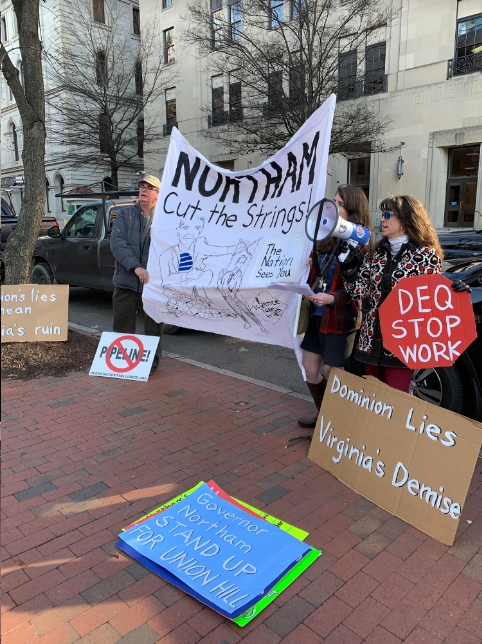 RICHMOND, Virginia– Activists from around the Richmond area gathered behind the Office of the Governor and outside the headquarters of the Virginia Department of Environmental Quality to highlight the deliberate inaction from the administration regarding environmental violations occurring along the path of the Mountain Valley Pipeline and pointed interference in the Atlantic Coast Pipeline permit process.

Reading a letter drafted to Governor Northam, one of more than 30 over a 10 month duration of weekly protests and letter deliveries, questioned Northam’s recent statements on him trying to be “fair” regarding the pipelines: “What’s fair about removing two members of the Air Pollution Control Board that asked justifiable questions about the lack of necessity and environmental racism involved with Dominion’s ACP Buckingham compressor station?  You pushed the scale heavily in Dominion’s favor at Dominion’s behest and to the detriment of the Union Hill community.

What’s fair about standing silently as your Department of Environmental Quality limited the new Buckingham compressor station comment period to two short weeks with two holidays in between, limiting the actual comment period to seven business days?  The vast majority of comment periods are at least 30 days – the DEQ was not required to make it this short of a comment period and did so only to obstruct the Union Hill community’s ability to comment. And they did so with your support.

What’s fair about the continued construction of the Mountain Valley pipeline, which is terrorizing communities and destroying water quality in southwestern Virginia after over 300 violations?  You stand silently as your Department of Environmental Quality blatantly allows MVP to do whatever they want while Virginians you are sworn to protect suffer.”

The activists followed the reading of the letter with chants and ‘No Pipelines’ carols that addressed Dominion’s influence over our regulatory agencies. The group marched to the DEQ headquarters, where another letter was read aloud, directed to DEQ Director David Paylor, Air Division Director Mike Dowd and Water Permitting Division Director Melanie Davenport. Chants of “Do We Want These Pipelines, No Fracking Way,” “Stop Work Now,” and No Pipelines-themed holiday carols echoed loudly while two activists delivered the letters.

The letter addressed the rushed, abbreviated comment period on Dominion’s ACP compressor station, passed via motion at the 12/19 Air Board Meeting and then announced a mere two days later: “The comment period falls over two holidays and leaves just seven business days for comment.  The majority of comment periods have been at least 30 days, and the DEQ has taken much longer to open the comment periods historically when it benefits the pipeline companies (like when the Water Board opened a comment period to investigate the sufficiency of NWP12 permits). …[DEQ] must extend the comment period.”  The letter also addressed the immediate need for a stop work order on the Mountain Valley pipeline: “…it defies common sense to refuse to stop work on a pipeline that is terrorizing Virginia communities and destroying water, as proven by the over 300 violations that ultimately violate the Virginia water quality standards that the Department of Environmental Quality is obligated to protect.  Your and Mark Herring’s lawsuit means nothing if you allow construction, and in turn, violations to continue. The Department of Environmental Quality must issue an immediate stop work order for the Mountain Valley pipeline.”

The action marked ten months of letter deliveries and meetings with Constituent Services, with zero response from the Northam Administration.