Back on April 3, I looked at how Virginia was doing in Unacast’s Social Distancing Scoreboard, which the L.A. Times describes as: “[using] data from millions of anonymous mobile phones to compare the distance that people in each county in the United States traveled before the outbreak began and after it took hold. Areas that observe at least a 40% decrease in average distance traveled are assigned an A grade, while those that show less than a 10% decrease or an increase are given an F, Unacast CEO Thomas Walle wrote in a post on the company’s website.” Also note that the scoring methodology “incorporates the reduction in non-essential visitation (in addition to our previous metric, reduction in distance traveled)” and that “we’ve been contacted by government officials and health policy experts at the local, state, and federal levels expressing great enthusiasm for our aggregated analysis and partnering with us to make their response to COVID-19 even better and smarter.”

So anyway, 23 days ago, Virginia scored a “D” grade, 8th-worst in the country, even as the vast majority of “A” and “B” grades were among “blue states, counties and cities. Withing Virginia, back on April 3, at the top were strongly “blue” areas –  Lexington City (A), Arlington County (A-), Alexandria (A-), Charlottesville (A-), Williamsburg (A-). Then there were the “B” grades –  Fairfax County, James City County, Loudoun County, Mathews County, Nelson County, Rappahannock County, Falls Church, Harrisonburg, Albemarle County, Lynchburg, Richmond City – again, most  of which are “blue” areas. As for the “C” jurisdictions – and there were a lot of them – they were a mix of “blue,” “purple” and “red” areas, including Henrico County, Prince William County, Spotsylavnia County, Fairfax City, Roanoke City, Newport News and Winchester. Finally, there was a looong list of areas with “D” and even “F” scores, the vast majority of these in deep-“red” areas (e.g., Shenandoah, Wythe, Washington, Rockbridge…), with a few exceptions like Chesapeake and Norfolk.

So…over three weeks later, how is Virginia doing? See below for the gory details, but in short:

Bottom line: it’s not looking great, at least on this scorecard, either nationally or in Virginia. Of course, it might be good to have strong leadership from the White House, but…nope, forget about that! Still, I do find it a bit puzzling that we seem to be backsliding, as I definitely would have expected grades to go up over time. Any theories? Is Unacast’s methodology flawed? Are Americans simply not adhering to social distancing guidelines, as they should be doing? Other ideas? 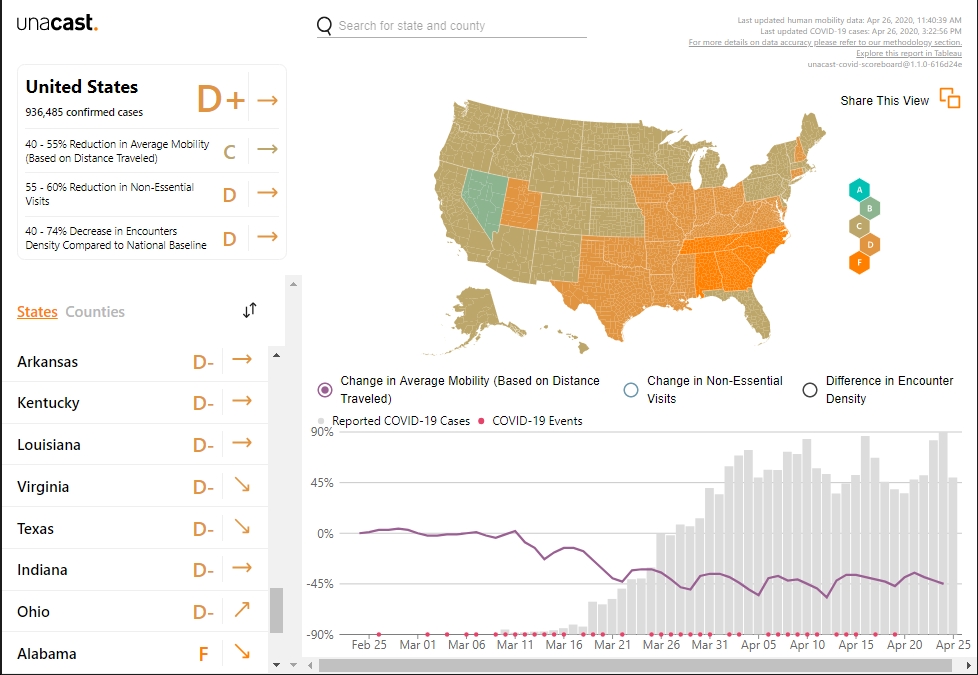 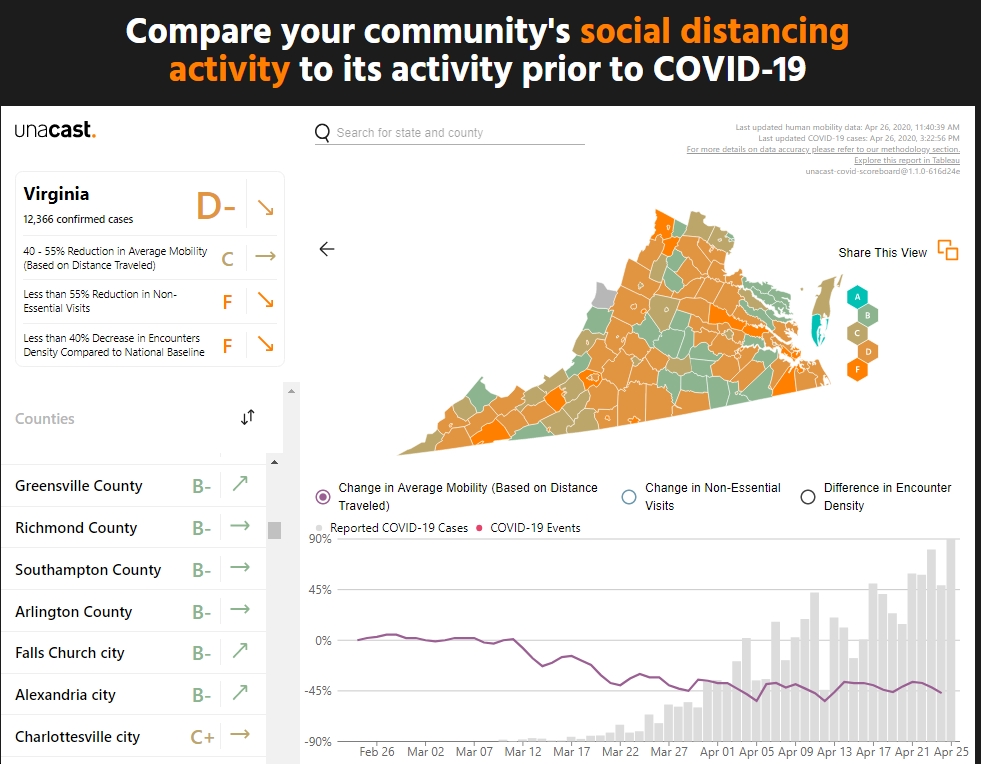 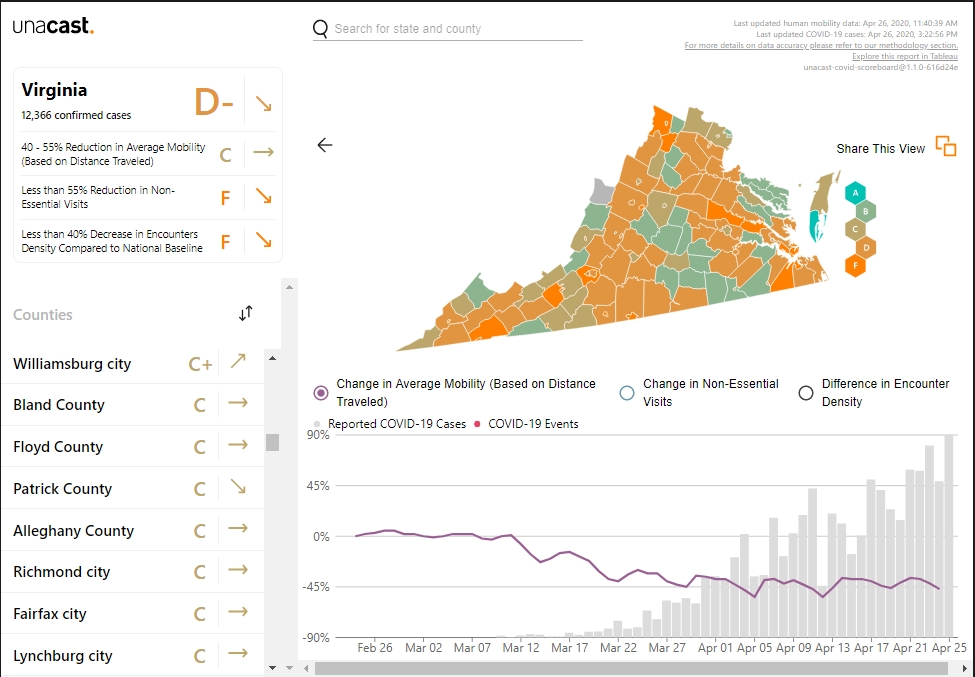 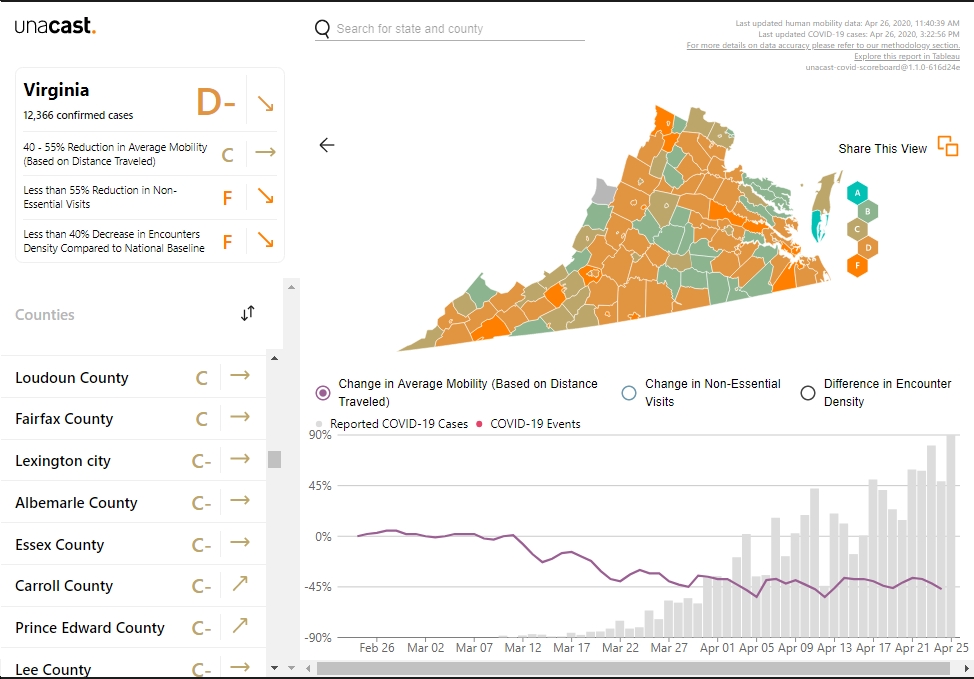 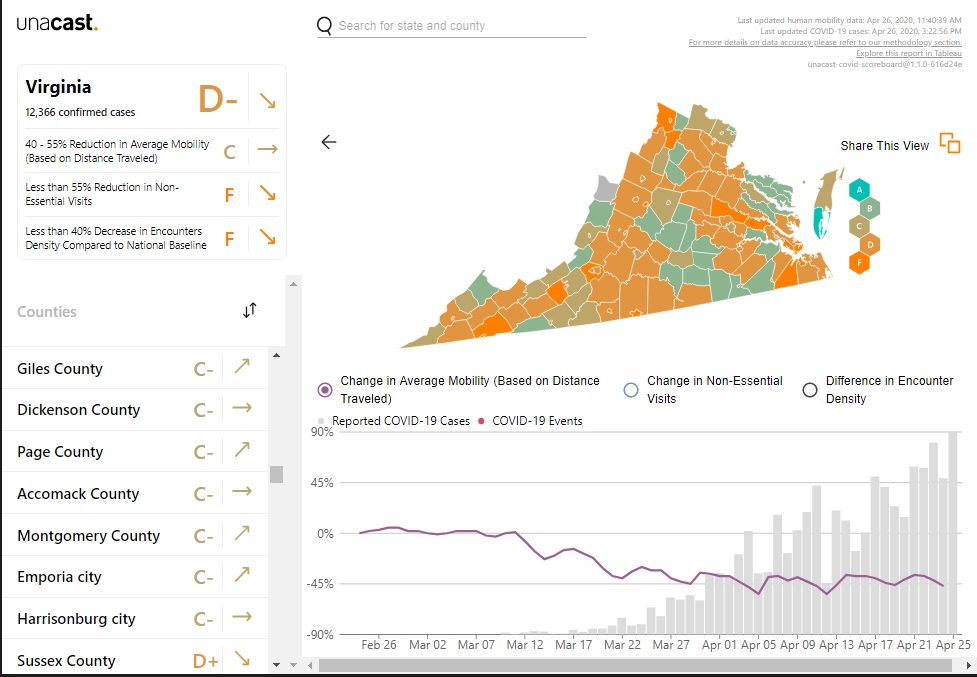 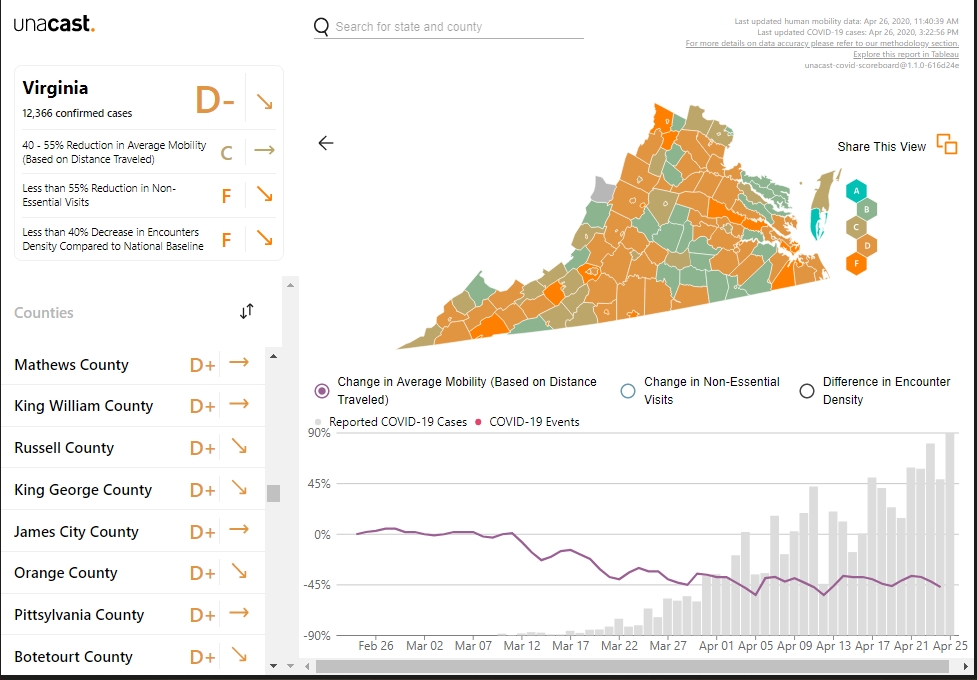 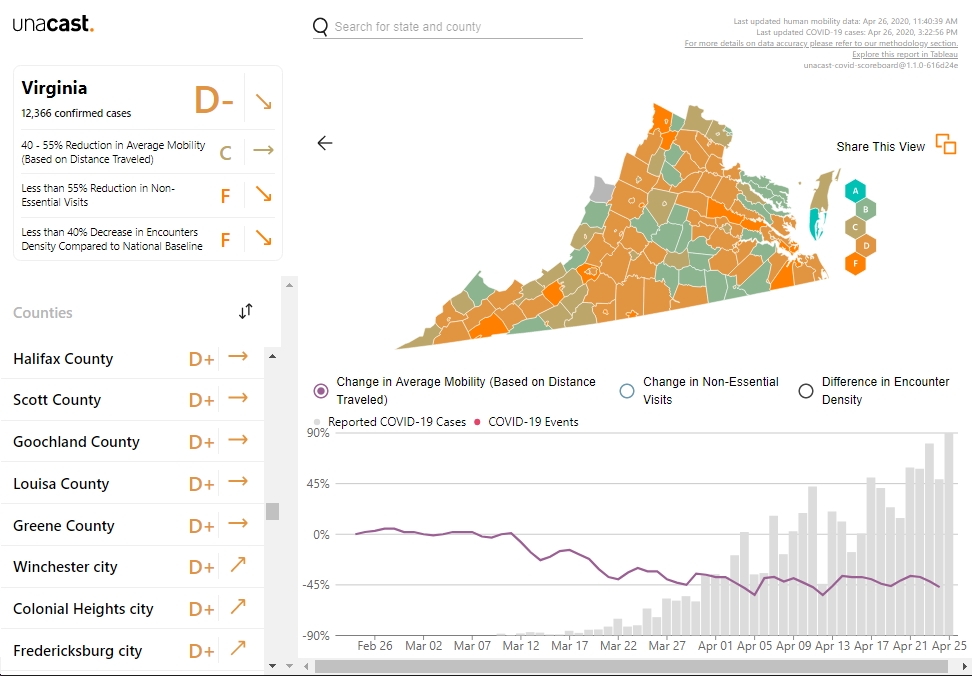 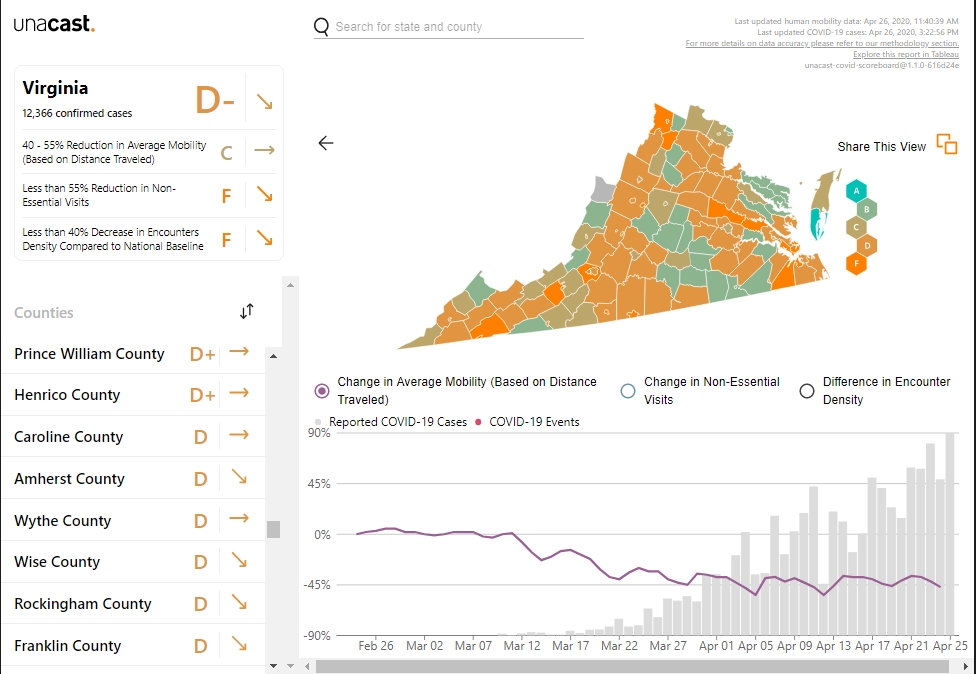 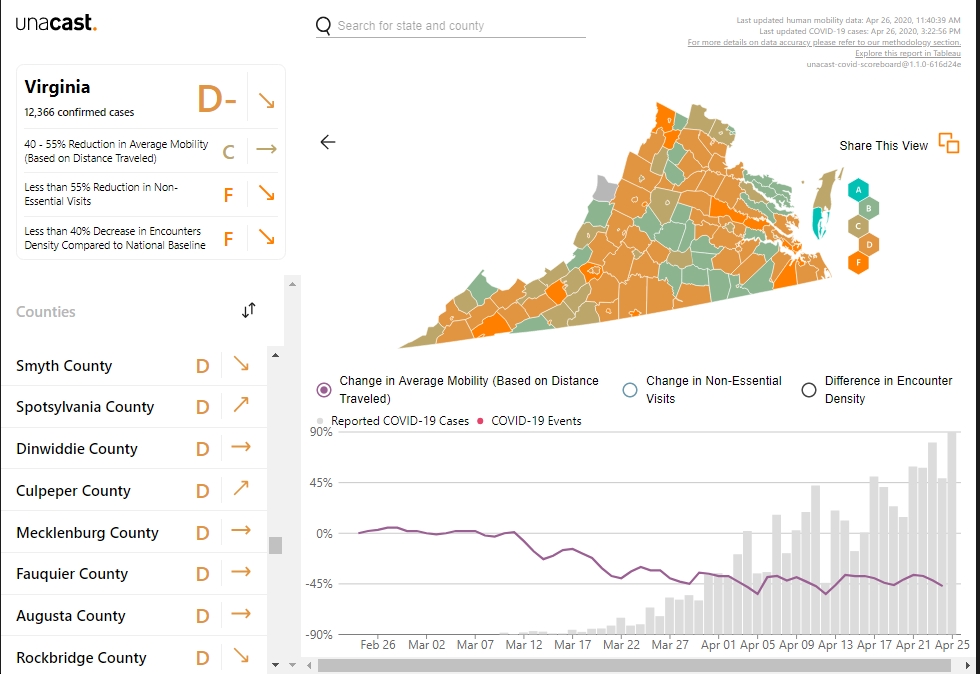 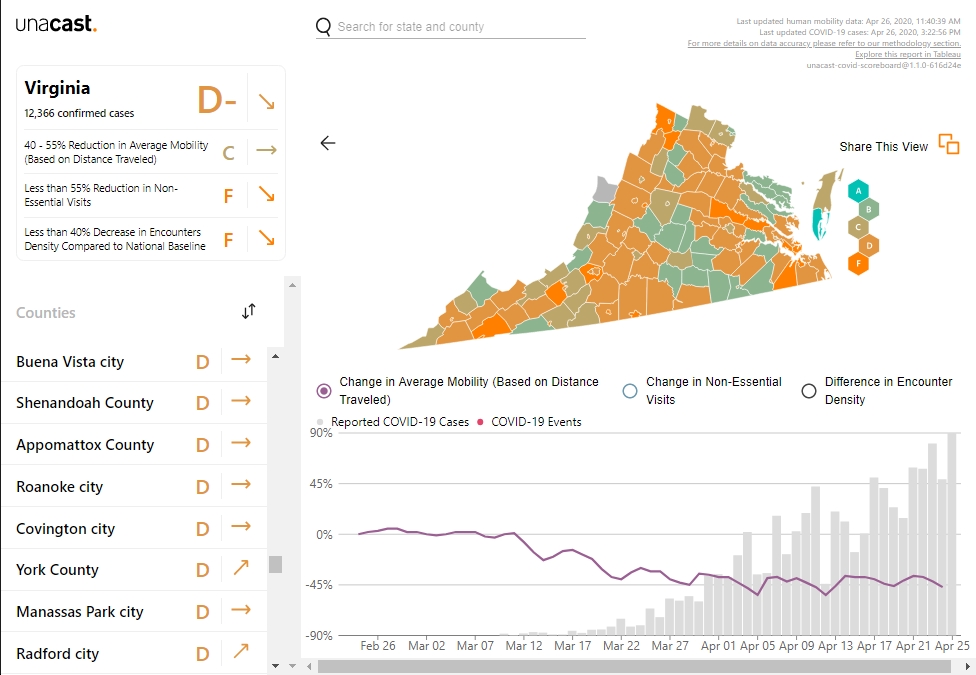 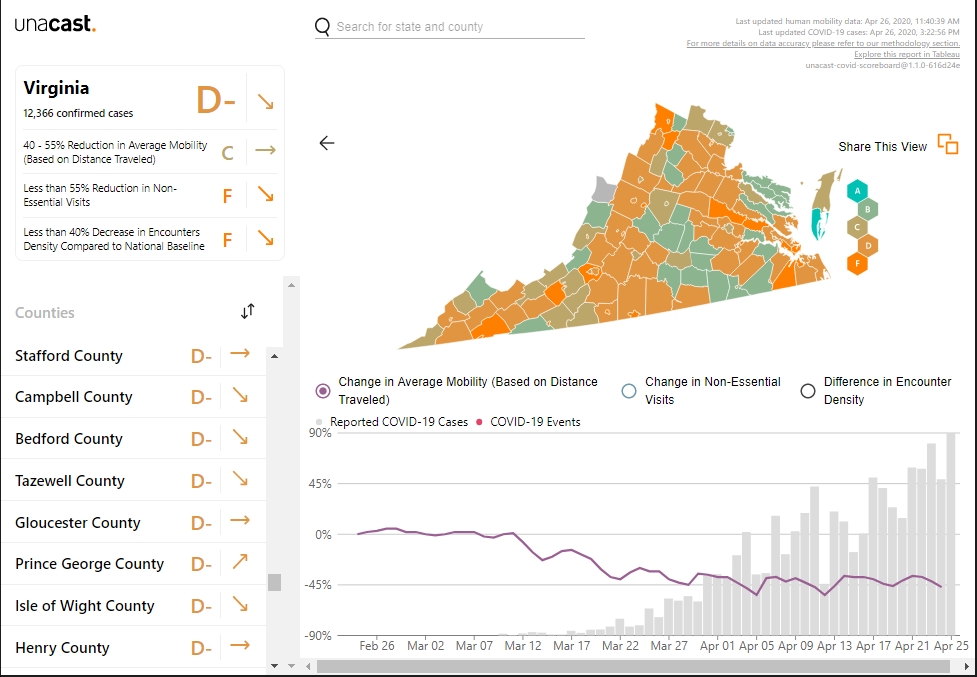 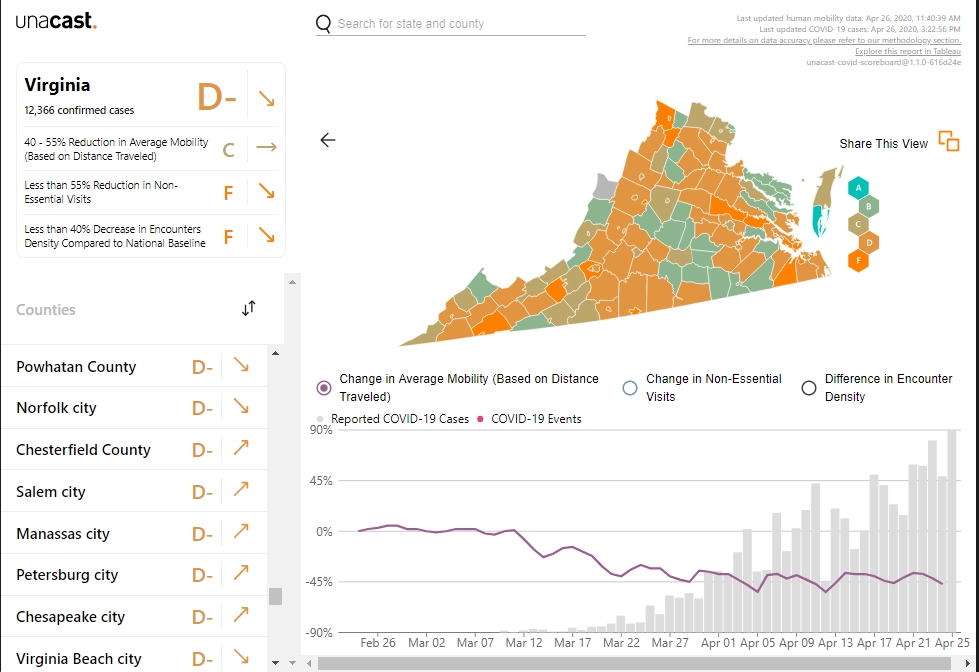 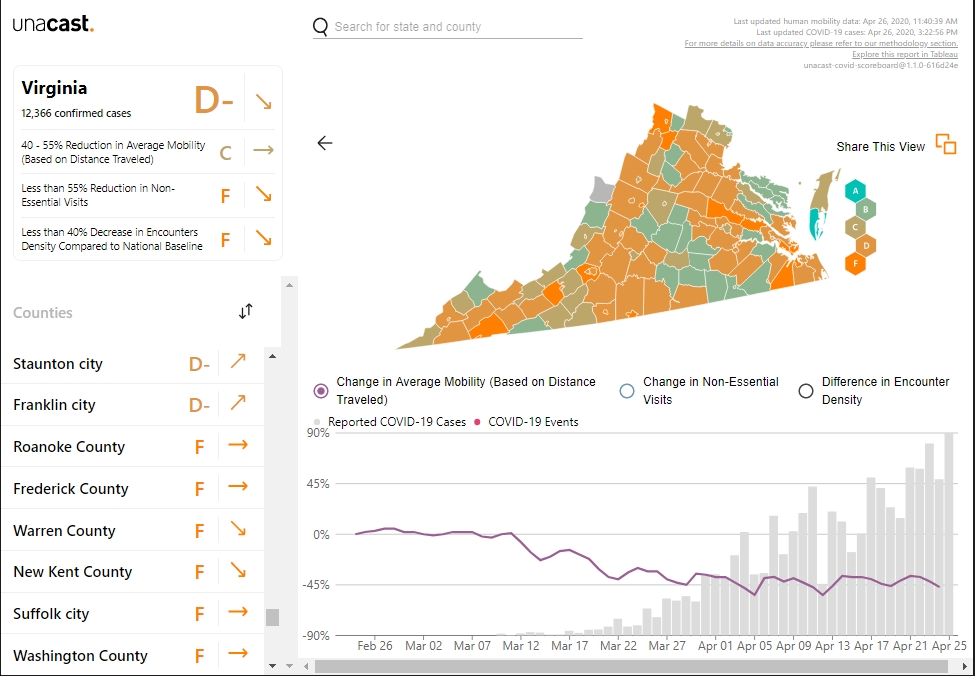 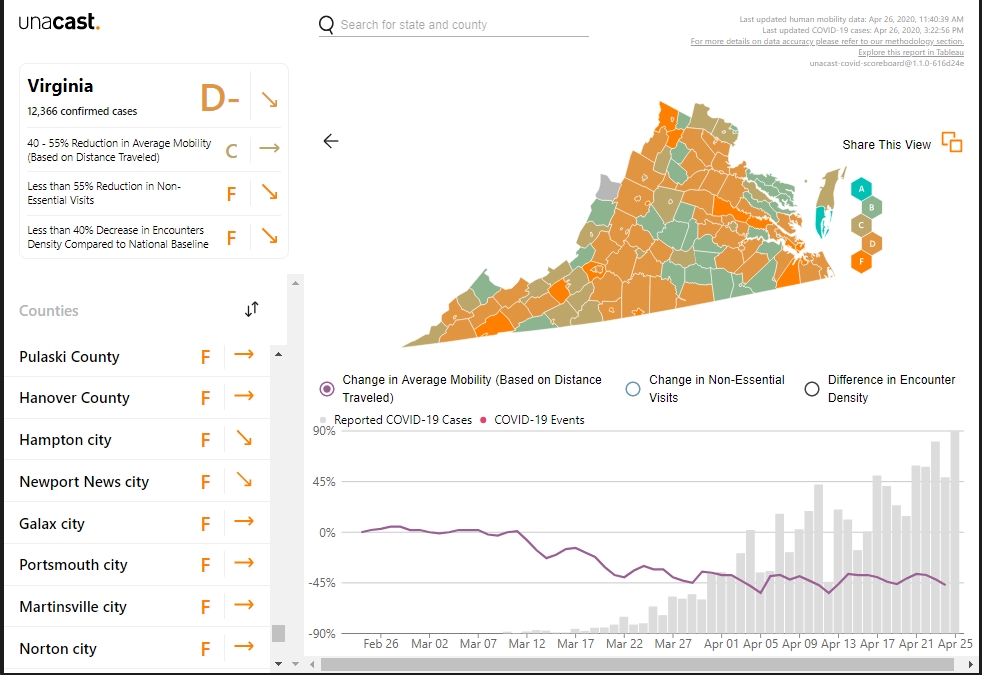 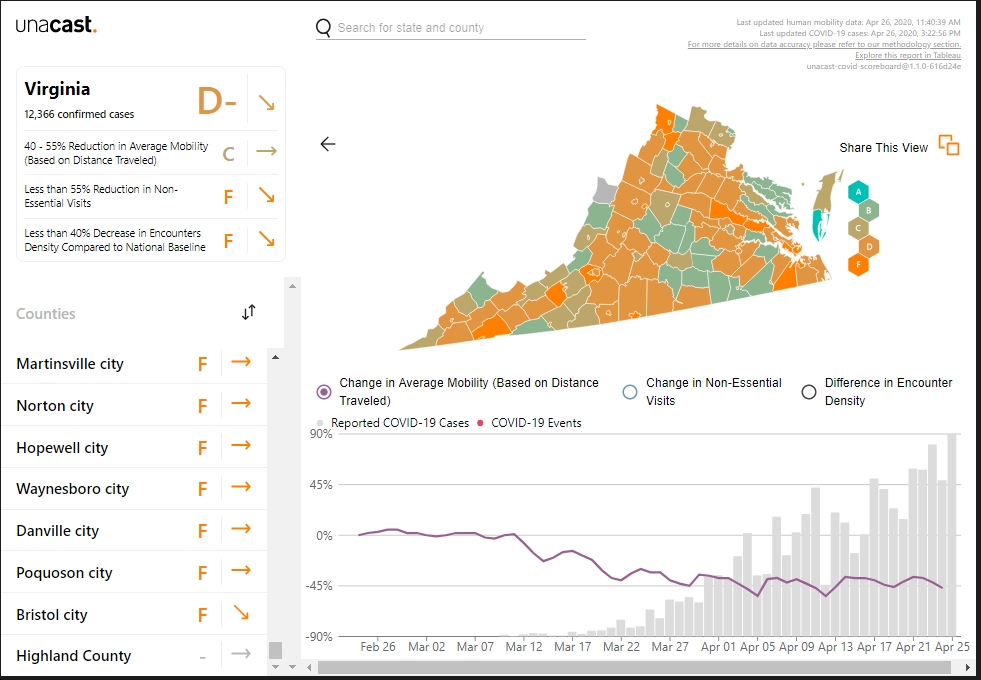