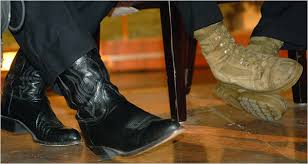 Former Reagan Administration Navy Secretary James Webb switches party, is “drafted,” and ultimately defeats incumbent U.S. Senator George Allen after a historic campaign. Among other things, the contest features a heated Democratic primary (against lobbyist Harris Miller) and then the near-complete meltdown of George Allen, who – among other things – introduces the word “macaca” into the lexicon. Also, a shoutout to Jim Webb’s 10,000-strong, grassroots/netroots “ragtag army” is most definitely in order here, because Webb most definitely wouldn’t have overcome George Allen’s huge money advantage without it.

Barack Obama becomes the first Democratic presidential candidate since LBJ in 1964 to carry Virginia. Final result: Obama 1.96 million (53%)-McCain 1.73 million (46%) votes. [Also worth nothing, the Virginia Democratic primary on February 12, 2008 was a crucial victory for Barack Obama on his path to the nomination]

Mark Warner’s Lieutenant Governor, Tim Kaine, trails for much of the summer and fall against Attorney General Jerry Kilgore, before surging the last few weeks and winning by 6 points (52%-46%) on election day. Highlights of the campaign include Kilgore’s infamous “Hitler ad,” which is widely seen as having gone way beyond the bounds of acceptability. Kaine runs as “Mark Warner Part II,” and also ties Jerry Kilgore to the increasingly unpopular George W. Bush. Also worth noting: the Virginia pro-Democratic blogosphere comes to the fore, with blogs like Raising Kaine, Not Larry Sabato, and Waldo Jaquith leading the way.

Less than two months after the 9/11 attacks, which included a plane slamming into the Pentagon, Mark Warner defeats Attorney General Mark Earley 52%-47% to become governor of Virginia. Warner goes on to become one of the most popular and most successful governors in Virginia history, then is elected to the U.S. Senate in 2008. By the way, I would have put this one higher, except that at the time (after the 9/11 attacks and the invasion of Afghanistan) I don’t think most people were particularly focused on Virginia politics.

Former Lieutenant Governor, former Governor, and two-term U.S. Senator Chuck Robb is defeated by former Governor George Allen by 4 points (52%-48%), on the same day that George W. Bush defeats Al Gore by 8 points (52.5%-44.4%). Robb had previously survived a tight race against Oliver North in the “Republican Revolution” year of 1994, but he couldn’t quite make it in 2000.

Creigh Deeds is trounced by Bob McDonnell, 58.6%-41.3%, in one of the worst defeats in Virginia gubernatorial history. Prior landslides include George Allen by 17 points (58%-41%) over Mary Sue Terry in 1993 and Jim Gilmore over Don Beyer by 13 points (55.8%-42.6%). Deeds unsuccessfully attempts to make McDonnell’s Regent University thesis an issue, while McDonnell focuses on economic issues at a time of serious recession. Deeds also turns off many “base” voters by proclaiming that he’s not a “Barack Obama Democrat,” as well as by stating his opposition to “cap and trade” legislation and to the “public option.”

Having been in the middle of this one, first as a pro-Brian Moran blogger, then as as a pro-Terry McAuliffe blogger, I can tell you it wasn’t fun. Friends divided against friends. People accusing other people – with zero evidence, of course – of having “sold out.” Moran and McAuliffe knocking each other silly, allowing underdog (and Blue Dog) Creigh Deeds to swipe the nomination. This Democratic primary, the first on the governor’s side since 1977 (turnout: 319,168), was one for the ages.

In the end, this race came down to a recount in which Bob McDonnell defeated Creigh Deeds by 323 votes out of 1,940,236 cast. It doesn’t get much closer than that, and it made all the difference, as Bob McDonnell became Attorney General, a strong contender for the Republican gubernatorial nomination in 2009, and ultimately governor of Virginia.  Meanwhile, as we all know, Creigh Deeds would decide to take on McDonnell again, this time for governor in 2009.  Not a wise decision…

At the start of this race, almost nobody thought that some unknown guy named with a last name people couldn’t pronounce would defeat Congressman-for-life Virgil Goode in the 5th Congressional district. I’m proud to say that I was one of those delusional people, and in the end, Tom Perriello proved people like me right and all the “sayers of nay” wrong.  🙂  Seriously, though, this was probably the biggest upset for Congress in the decade. Now, we’ll see if Tom Perriello can hold this seat in November 2010, and if the naysayers are proved wrong once again.

Bill Bolling beat Sean Connaughton 58%-42%, and Bob McDonnell defeated Stephen Baril 66%-34%, starting both Bolling and McDonnell on the road to victories in 2005 and 2009. Now, Connaughton will be McDonnell’s Transportation Secretary, while Bolling will be lieutenant governor and probably run for governor in 4 years.  And the rest is history, as the saying goes…