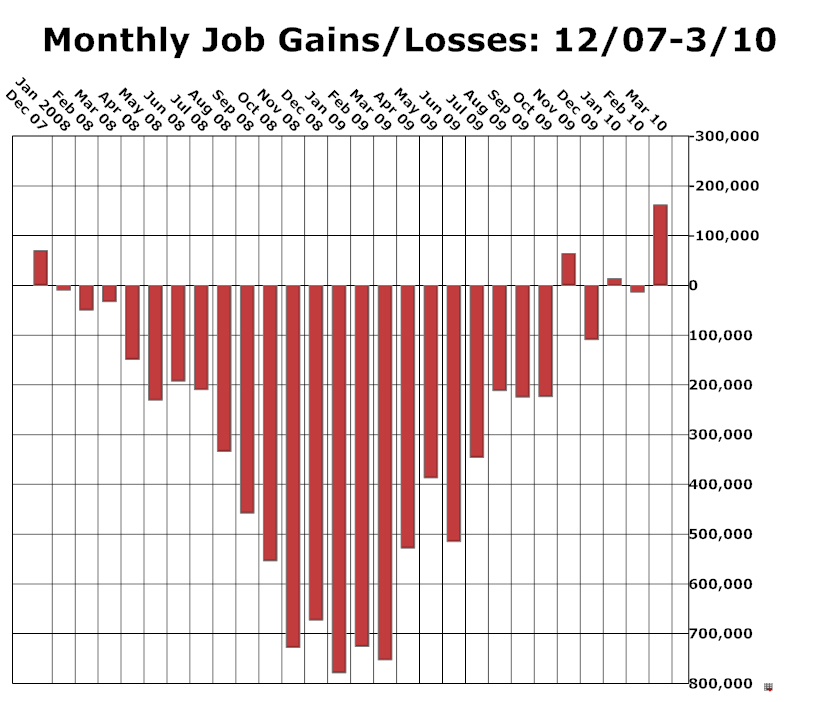 As the Washington Post reports, the U.S. economy added 162,000 “non-farm” jobs last month, representing “the biggest one-month jobs gain in the past three years.”  And in other good economic news, “[t]he Institute for Supply Management reported that manufacturing activity was up for the eighth consecutive month, with a rate of growth faster than any since July 2004.” But wait, there’s more:

…Factory orders, particularly in durable goods, are so positive at a 0.6% month-to-month rise that they are beginning to merit the description of  “robust.” And retail sales at chain stores were also up 0.6% for the week, which means they are on target to top 3% or more for the whole month compared with last year’s dismal record.

Motor vehicle sales were up as well, to a seasonally adjusted annual rate of 11.8 million, a vast improvement over February…

And let’s not forget the stock market, which just had “its strongest first quarter since 1999.” Great news, and we have Democrats – who passed a huge economic recovery package, as well as several other jobs measures, with essentially no Republican support – largely to thank for this (the graph above tells a powerful story). So, where’s Eric Cantor and his Party of no this morning to talk down America’s economy and to tell us that the economic recovery package passed a year ago “isn’t working?”  No comment on the above graph, which shows the economy cratering under a Republican administration and coming back strong with Democrats in charge? Apparently, the cat’s got the Republicans’ (forked) tongues so far today, but give ’em time, I’m sure they’ll think of something bad to say soon enough.