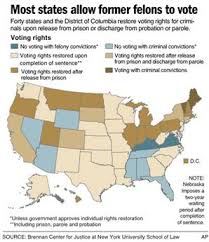 According to the Democratic Party of Virginia, “It’s shocking that the Governor would unnecessarily stumble on Virginia’s history yet again.” Actually, some of us aren’t “shocked” at all, but that’s another story. 🙂

P.S. How did the 2nd Amendment get in here, I must have missed something? Also, as far as I’m concerned, there can’t be too many barriers for felons to get a hold of guns. No thanks!

Virginia Democrats called on Gov. Bob McDonnell on Monday to remove an unnecessary additional barrier to restoration of rights for non-violent felons who have served their sentences.

The McDonnell Administration will require non-violent felons to write a detailed essay in order to have their voting and 2nd Amendment rights restored, according to news reports this weekend.

“Governor McDonnell should immediately remove this costly and burdensome barrier for non-violent offenders to renew their voting and 2nd Amendment rights.  It’s mind-boggling that Governor McDonnell would choose to bury the Secretary of the Commonwealth’s office in unnecessary paperwork during a time of belt-tightening and budget cuts. Surely the Secretary’s valuable time could be used in more productive ways than grading essays for Governor McDonnell.

“If Governor McDonnell wants to improve Virginia’s prisoner reentry efforts, he should make it easier for those who have completed their sentence to fully integrate back into society. Instead, he chose to institute an unprecedented roadblock in a Commonwealth with a painful history of blocking voting rights. Given his experience last week, it’s shocking that the Governor would unnecessarily stumble on Virginia’s history yet again.

“Virginia now may have surpassed Kentucky as the state with the most obstacles to reintegration for non-violent offenders who have served their sentence. Virginians should not be subjected to more bureaucracy getting in the way of their rights to vote, hunt, or exercise any other Constitutional rights.

“This is yet another unnecessary side project by Governor McDonnell when Virginia is facing its highest unemployment rate in nearly 30 years. Right now, Virginians have to be wondering, what happened to ‘Bob’s for Jobs?'”