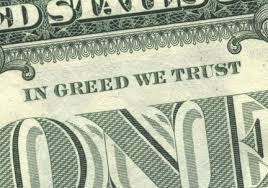 “I think the market is cleansing itself…” That remark was made recently on CNBC by an apologist for the shenanigans and illegal acts that brought us the financial debacle now unfolding – a spokesman for those who insist that the “free market” can “regulate itself.

The comment totally discounts the disruption in the lives of millions caused by the collapse of the economy, suffering brought about by the rampant greed and manipulation of markets in this latest financial collapse. I wonder…is the market cleansing itself of flash trades…dark pools…unrelenting short selling…problems with derivatives? Can we trust firms like Goldman Sachs to pledge that, never again, will they peddle junk to the rest of us, while their insiders bet that very junk will fail? I don’t think so.

It’s actually in the best long-term interest of the stock market and Wall Street to be re-regulated. As it stands now, the majority of Americans are rightly convinced that the stock market is rigged, a place where insiders have gamed the system so that they alone are sure to win. Elimination of the practices that brought down the whole economy is vital. Without re-regulation, we are destined to repeat the debacle just endured. The very people who cause the problem are never the ones who pay for it. The rest of us are.

So, as the White House begins the arduous job of selling reform of Wall Street against the headwind of ever-present Republican obstructionism, it might pay for all of us to learn a bit about the insider’s gaming of the stock market? Let’s look behind the curtain and reveal some of the actions of the greedy Wall Street Wizards of Oz….

“Perfect information” is one of the theoretical preconditions of an efficient, perfectly competitive market. Economic theory also assumes that market participants act rationally. So, in order to have markets act according to what we were taught in Economics 101, all the market participants are assumed to have good information available. In practice, perfect information is never available in the real world, and some of the shenanigans being used on Wall Street insure that even good information is exactly what we “retail investors” do NOT have. Let’s look at some of them…

In “flash trading,” large financial companies gain access to stock trading information milliseconds before the same information is made available to the trading public. The traders then use superfast computers to trade ahead of pending buy and sell orders, thus gaining an unfair advantage on other traders.

Sen. Charles Schumer (D-NY) has called flash trading one of the things that has turned the stock market into “a two-tiered system” where a privileged group of insiders receives preferential treatment not available to the rest of the market.

A “dark pool” is the act of institutions trading large blocks of stocks over the counter among themselves, so that the public doesn’t see the transaction listed on one of the exchanges. Traders defend dark pools by saying that they avoid influencing a stock or a stock sector. However, the rest of the market is put at a disadvantage since it doesn’t have knowledge of what’s occurring.

Let’s use a specific example. Suppose an investment house or institutional investor decides that it wants to unload a large block of XYZ stock. Let’s assume the stock is selling at $100 per share.

Our seller knows that heavy selling will drive the price of XYZ shares down sharply. That would affect the XYZ shares it is keeping and perhaps other stocks. So, it offers the XYZ shares for sale in the dark pool of other institutions. Perhaps other institutions don’t want to pay $100 per share, so the best price it gets is $94 per share. The trade is executed in the dark pool, off the exchanges.  Here’s the problem for the rest of the market. The value of XYZ appears to be $100, but to large investors in the dark pool the price actually is $94. Anyone buying the stock on an exchange is probably paying more than he would pay in a sale if all the knowledge about XYZ were known.

Another trading tactic is “short selling,” a form of speculation  that is used by a trader to take a “negative position” in a company. The usual practice is for the trader (1) to “borrow” securities from another place, typically a bank or another broker (2), agreeing to return the securities at a future date. The original trader (1) then sells the shares to a third-party buyer (3), who takes full ownership and usually doesn’t have any knowledge of the short transaction. When the trader (1) wants to “unwind” his short position, he buys back equivalent shares in the market and returns them to the lender (2).

Trader (1) is betting that the stock will decline in value, in the hope that he will make a profit by repurchasing shares later when the price has lowered. Because trader (1) is generally required to make a deposit for the full share price with the lender (2), the action also provides the lender with interest on a position that he was not actively trading.

“Naked short selling” is the situation that exists when there is short selling without first arranging a borrow. In the past few years, a number of companies have been accused of using naked short selling to drive down share prices, sometimes with no intention of ever delivering the shares to a third party. Instead, a “fail to deliver” situation arises. This particular tactic is so dangerous to the validity of the market that the SEC banned it, but that action was taken only after Bear Sterns and Lehman Bros. failed.

There was a time when those who wanted to short a stock had to wait until the price of the stock showed an uptick to sell, but during the deregulation of Wall Street, that logical rule was dropped.

“Derivatives” are financial instruments whose value is determined by the price of something else. In other words, derivatives are bets on things, such as the price of a commodity going up or down in a set time. There are all sorts of derivatives with all sorts of names, like options, swaps, interest rate derivatives, etc. Many times businesses use derivatives to buy themselves a form of insurance.

Derivative trading can result in huge losses. In fact, AIG and the subsequent bailout of that company by the government was a result of AIG having mega losses because it had “insured” risky mortgages. Another example of just how dangerous such investments can be occurred in the 1994 debt crisis in Orange County CA. Republican county treasurer Robert Citron had made derivative investments that totaled over $1.5 billion. When the investments went bust, it caused the largest municipal bankruptcy in American history.

President Obama has said that he will veto any financial reform legislation that does not contain regulation of derivatives because of their ability to destroy vast amounts of wealth and to put whole segments of the economy at risk.

It seems to me that the Goldman Sachs – Paulson & Co. Abacus deal the SEC recently brought charges over was a combination of derivatives fraudulently marketed and short selling by those in the know. John Paulson joined Goldman in selecting a group of mortgages that they felt were destined to fail. Goldman then bundled them together and sold derivatives called collateralized debt obligations based on the mortgages to unsuspecting investors who had no knowledge of how bad the investment was. (That’s the alleged fraud.) Goldman and Paulson both then shorted the instruments and made a cool $1 billion each.

This nation needs strong regulation of the greed that permeates Wall Street. We’ll see if we actually get it. Right now, the Republicans in the Senate are saying they will stop efforts at reform. Perhaps that’s because the money from Wall Street is betting it can preserve the rigged game that is in play now.

Video: “Really Emotional” Sen. Tim Kaine Says Shootings Like in Uvalde “Kind of Give Me PTSD,” Compounded by Lack of Action in US Senate ("It's like we have a gag rule about debating gun safety on the floor of this body," like "slavery during the 1830s") https://bluevirginia.us/2022/05/video-really-emotional-sen-tim-kaine-says-shootings-like-in-uvalde-kind-of-give-me-ptsd-compounded-by-lack-of-action-in-us-senate