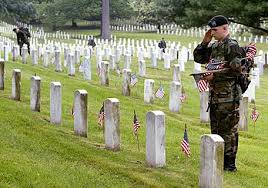 Once again, we Americans are relishing a three-day weekend holiday, one that now traditionally kicks off summer. No doubt, too few of us will stop to think about the origins of what began as perhaps our most solemn commemoration.

I can’t actually find a definitive moment when the first Memorial Day was celebrated, but most people accept that it grew out of the actions of southern women who decorated the graves of  Confederate dead soldiers soon after the end of the Civil War. Also, there were similar commemorations of various kinds, including decorating graves with flowers and small flags, in many northern communities to honor the Union dead.

The first national declaration of “Memorial Day” was General Order No. 11, issued by Gen. John A. Logan, commander of the Grand Army of the Republic, on May 5, 1868.

The 30th day of May, 1868, is designated for the purpose of strewing with flowers or otherwise decorating the graves of comrades who died in defense of their country during the late rebellion, and whose bodies now lie in almost every city, village, and hamlet church-yard in the land. In this observance no form of ceremony is prescribed, but posts and comrades will in their own way arrange such fitting services and testimonials of respect as circumstances may permit…Let no vandalism of avarice or neglect, no ravages of time testify to the present or to the coming generations that we have forgotten as a people the cost of a free and undivided republic.

In 1966 President Lyndon Johnson declared Waterloo NY to be the “birthplace” of Memorial Day because the town had organized an annual community-wide celebration that included placing decorations on the graves of their war dead shortly after the end of the Civil War. In 1971 Congress made Memorial Day a national holiday, one that memorialized those killed in all the wars that the United States has fought. Later, the original May 30 date for Memorial Day became the last Monday in May. Hence, the three-day weekend.

There are other commemorations that have been melded onto Memorial Day. A poem written by John McCrae inspired the sale of paper poppies to honor those who died in World War I. The American Legion has continued that tradition to this day.

“In Flanders fields the poppies blow

Between the crosses, row on row

That mark our place; and in the sky

Scarce heard amid the guns below.

We are the Dead. Short days ago

Loved and were loved, and now we lie

Unfortunately, like so many of our holidays, Memorial Day has morphed into just another three-day weekend, dedicated to visiting now-open swimming pools and having a cookout. Plus, the standard “fill-in-the blank” holiday sales will be going on at malls all over the country.

Perhaps we all would benefit from following then-President Clinton’s May 2000 resolution asking all Americans to pause for one minute at 3 p.m. on Memorial Day in order to “consider the true meaning of this holiday. Memorial Day represents one day of national awareness and reverence, honoring those Americans who died while defending our Nation and its values.”

One minute is not asking too much from all of us in memory of all those lives cut short, all the possibilities denied to those who died in war after war throughout our national history.