In the following maps, red precincts are the new districts under the plan released yesterday, blue are the old, and purple the overlap areas. Precincts are labeled. Click to embiggen. John Miller’s 1st District is almost an entirely new district. After winning by the skin of his teeth against a extremely conservative Republican, Miller was going to need a lot of help if he had any hope of defeating a challenger that wasn’t 2007’s Tricia Stall. Miller jettisons heavily Republican Poquoson in favor of picking up more of Newport News (increasing the black percentage from 24% to 33%) and stretching into Williamsburg. Boosting the black population and adding in students at William & Mary requires a hefty GOTV effort to realize any gains. While less underpopulated than previously thought after a Census Bureau miscalculation, Northam swaps 10 Hampton City and 1 Virginia Beach precinct for slightlier friendlier precincts (5 Hampton, 2 Virginia Beach). Democratic gerrymanderers faced a wall of untouchable majority-minority precincts that they could not take Democratic votes from. McWaters’ reliably Republican Virginia Beach district was eliminated and dropped into Richmond. This new seat, which Deeds carried  by 4 points, was carved out of Democratic-leaning suburbs in the 10th, 11th, and 12th Districts, turning those districts from 65.8-67% McDonnell to 69-71% McDonnell. Coupled with some reliably Democratic Richmond City precincts, this district has a significant black component (31.9%) and can viably elect a new Democrat.

Houck’s district is drawn into a Democratic corner of Albermarle County, reaching to the edge of Charlottesville City and dropping reliably Republican Madison County and most of Culpeper County. Fredericksburg City is made whole. The district goes from 67% McDonnell to 61% McDonnell. There really wasn’t much that could be done with this district to make it any more Democratic without eliminating Senator Creigh Deeds’ (D) Charlottesville base. 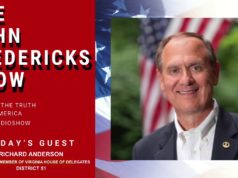