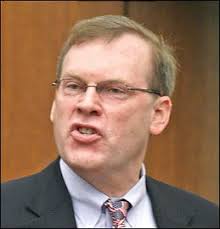 Yesterday, Rep. Morgan Griffith (R-9th) embarrassed himself (see starting around 1:39:25 of the video), the 9th Congressional District, Virginia, and really the entire United States of America, demonstrating for the world to see: 1) his proud ignorance of science; 2) his total looniness, bordering on insanity; 3) his utter disrespect for the institution of Congress; and 4) his complete control by the coal industry, and complete lack of integrity in parroting their pathetic, “cigarettes don’t cause cancer” style propaganda. I mean, I wasn’t the biggest fan of Rick Boucher because I thought HE was too much in Big Coal’s pocket, but at least Boucher was a rational human being who respected science and had a long-term, enlightened view of the coal industry. Morgan Griffith? He’s just completely bonkers – not to mention the missing village idiot we’ve been looking for all these years. With that, heeeere’s Crazy Morgan!

…Has anybody studied what the temperatures were during the period in history known as the ‘great optimum,’ which led to the rise of the Mesopotamian and Egyptian cultures. That was a time in history of global warming. We know that. But how hot did it get? Obviously those were things that led to the rise of our earliest civilizations.  At some point, I’d like to have somebody look at the ‘lesser optimum,’ which is closer in time. How much did the temperature rise then? We know that that led to the Vikings dominating Europe for several hundred years. And where the ice cap in the North is melting, we’re now finding evidence of Viking habitation in those areas. Can somebody answer the question of why are the ice caps on Mars melting. Both NASA and National Geographic have reports on this. Is it in fact a shift in the orbit of Mars or is it that the sun is putting out more radiant heat? Why 40 years ago, when I was in elementary and middle school, were we taught that an increase in greenhouse gases was going to lead to a new ice age? These are questions that I, believe it or not, lie awake at night trying to figure out.

Yeah, and I lay awake at night trying to figure out how an absolute imbecile like Morgan Griffith got elected to the U.S. Congress.

P.S. For some information on the “witnesses” called yesterday, see here. Also, as Henry Waxman correctly points out, “All that seems to matter [to the House GOP] is what Koch Industries thinks.” Other than that, it’s not even worth spending a second of time debunking the Mars crap, the sunspots crap, or any of the other crap spewing from Morgan Griffith’s mouth – or from the mouths of his ignoramus Republican’t colleagues. Just pity them, and wonder how evolution – or a deity, if you’re so inclined – could have produced such creatures.