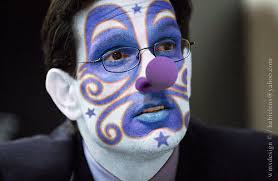 This is exactly the right response to Eric Can’tor’s latest insanity.

Speaking to reporters aboard Air Force One, [White House Press Secretary Jay] Carney said the federal government’s priority should be to respond to the disaster. He also noted that Cantor (R-Va.) hadn’t demanded offsets when the Bush administration rang up “unprecedented bills.”

“I guess I can’t help but say that I wish that commitment to looking for offsets had been held by the House majority leader and others, say, during the previous administration when they ran up unprecedented bills and never paid for them,” Carney said, according to a White House pool report.

Not that Eric Can’tor cares about people suffering from a natural disaster, or for that matter from the consequences of his anti-middle-class policies, but still, this is an excellent line of counterattack against Can’tor. For one thing, this hurricane is a classic case of why we need the government, not just a bunch of rich people (and lots of poor ones, but Can’tor et al could give a crap about them) and corporations (which, conveniently, are also “persons” in Republican la-la land), as would be the case in Republican Utopia. For another, Carney’s rebuttal to Can’tor has the great virtue of being 100% correct, whether we’re talking Can’tor himself, or his pal George Allen, who also voted in lockstep to turn Bill Clinton’s enormous surpluses into George W. Bush’s enormous deficits — the same ones that Can’tor and Allen are now, ironically (not that they understand irony) railing against. Amazing, huh?

P.S. Something else Can’tor wrong about – the nonpartisan, authoritative Congressional Budget Office finds that “the American Recovery and Reinvestment Act (ARRA) increased the number of people employed by between 1.0 million and 2.9 million jobs as of June.”  In other words, it worked. And it would have worked even better if Can’tor and his fellow Teahadists hadn’t been busy sabotaging it, talking down the economy, and holding it hostage to their debt ceiling demands. Of course, they’ll never take responsibility for their actions, but I thought I’d point that out.