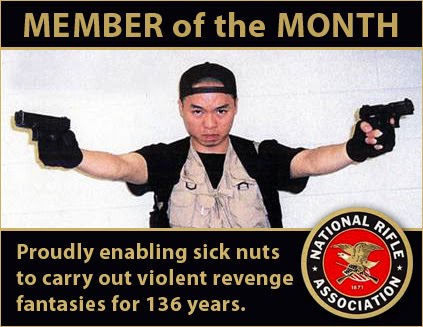 Whenever National Rifle Association spokesman Wayne LaPierre goes on television to claim that the NRA gets its money from its membership in small donations, he’s lying through his teeth. The real money behind the organization is from industries that make and sell guns and ammunition, as well as right-wing wealthy donors. The NRA receives tens of millions of dollars from domestic and foreign gun manufacturers and other corporations related to the firearms industry through its “corporate outreach program.”

The Violence Policy Center Executive Director Josh Sugarmann states, “Today’s NRA is a virtual subsidiary of the gun industry. While the NRA portrays itself as protecting the ‘freedom’ of individual gun owners, it’s actually working to protect the freedom of the gun industry to manufacture and sell virtually any weapon or accessory.”

From 2004 to 2010, the NRA’s revenue from corporate fundraising grew twice as fast as its income from members’ dues. So, let’s be clear. The NRA does not  exist to represent gun owners and hunters. Its purpose is to be a front for corporate lobbying, to help elect legislators who will resist any and all gun regulation, and to strike fear in its members about gun control. The political activities of the NRA serve right-wing political interests, as well. Otherwise, why would the Koch brothers have donated big bucks to the NRA in 2012?