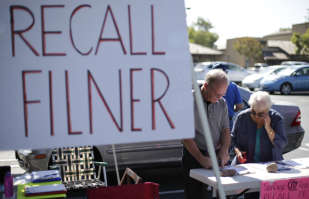 Yesterday, Dave Weigel marveled in Slate at how “The Cuccinelli Campaign Is Really Trying to Link Terry McAuliffe to Bob Filner.”

Ken Cuccinelli’s campaign is trolling Terry McAuliffe pretty hard. Anyone following the Virginia governor’s race knows that Cuccinelli’s campaign is zealous in sending out torrents of email blasts. Most of the emails criticize Terry McAuliffe for his failed electric car startup or his prominent (and, as Mark Leibovich writes in This Town, perpetually flaunted) connections to the Clinton family.

But two recent emails-titled “What values?” and “Break His Silence”-forge a new path in oppo research by trying to link McAuliffe to San Diego Mayor Bob Filner. McAuliffe’s crime of omission: not calling for Filner to resign over his spate of sexual harassment accusations…

If this is not THE STUPIDEST attack in Virginia political history, I’d love to hear examples of attacks that were “more stupider,” as the expression goes. Let us count the levels of brain-dead, drooling idiocy here (note :you can see Cuccinelli’s latest email in the comments section):

1) the Bob Filner situation has absolutely nothing to do with Virginia;

2) Terry McAuliffe has absolutelynothing to do with Bob Filner (who just announced he’s resigning, by the way – by Cuckoo’s “logic,” should T-Mac get credit? LOL);

3) this whole line of attack opens Cuccinelli up to demands that he denounce every crazy, bigoted, extremist nutjob Republican out there, from Steve King to EW Jackson to a gazillion others.

Of course, in Cuccinelli’s case, he’s actually on the same ticket with an extremist/bigot/nutjob (actually two, but for some reason people are giving Mark Obenshain a pass). And in Cuccinelli’s case, he’s actually stated that he thinks Steve King’s a great Congressman. We could go on and on; the point is, Cuccinelli not only doesn’t condemn the hateful, ignorant, divisive, extreme rhetoric and actions by his political allies and contributors (e.g., the Koch brothers are two of the most evil people in America), he doubles down on his ties with these people. By his own “Bob Filner” standard (I was about to call it “logic,” but it’s too stupid to be logical in any way) shouldn’t Democrats be able to pound him on anything and everything those people say and do? Should Cuccinelli be held responsible for every (insane/hateful) word uttered by EW Jackson, by the right-wing propagandists on Faux “News” or on “Red State” or whatever? If not, why not?

P.S. All I have to say to Filner’s resignation is “good riddance scumbag!”

P.P.S. The Crazy Cooch folks are now somehow trying to pressure McAuliffe into condemning Anthony Weiner. Basically, what they’re arguing is that Terry McAuliffe is now personally responsible for anything done by any Democrat anywhere in America, and must spend his days and nights tracking them down and condemning them. Same standard for Cuckoo and the huge stable of loony-tune Republicans out there? Nah!!!