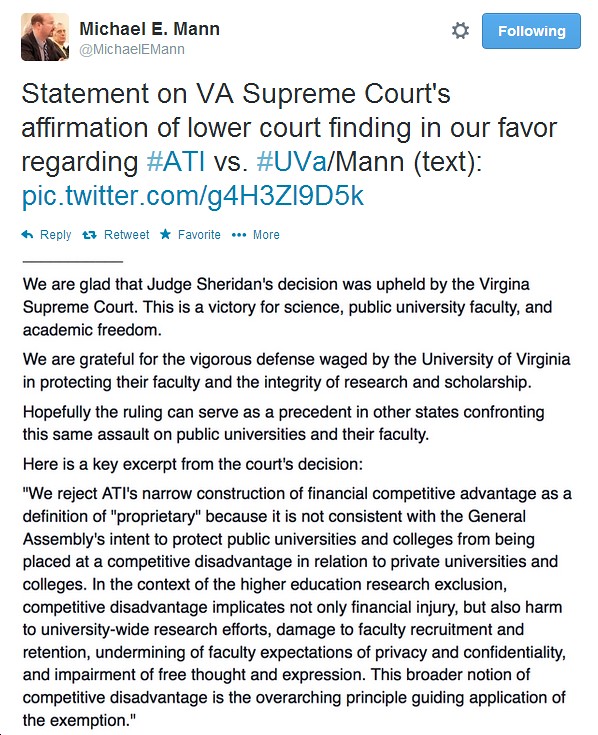 According to a 2010 filing with the IRS (PDF), ATI received $40,000 from its sister group ATP, which in turn is supported by oil, gas and coal interests.

It received another $5,000 from the Atlas Economic Research Foundation, a Virginia-based think tank that, according to ExxonSecrets, received over $1 million in funding from Exxon Mobil since 1998. Atlas also received $122,300 from the Koch foundations and $735,000 from the Pope foundation. [8]

An online petition hosted by the American Tradition Institute opposing cap and trade makes the following assertions about climate change: [2]

“… the claims of carbon-driven anthropogenic global warming (AGW) are unproven and are, in fact, contested by over 31,000 scientists…”

One of the leaders of ATI is one David Schnare, “a Virginia attorney” who was “involved in the ATI legal action seeking to let him and Horner review thousands of climatologist Michael Mann’s University of Virginia emails, including emails deemed exempt from FOIA.” (another one who was involved was none other than our friend, the bat****-crazy “Sideshow Bob” Marshall).

Among other things, Schnare has stated that environmental activists are “very sick people” who “quietly rejoice over the potential of millions (billions?) of starving people;” and that “the Scandinavian moose emits 2,100 kg of methane a year, equivalent to the green house gases emitted by an automobile trip of 13,000 km,” so “Thank goodness hunters shoot 35,000 of them each year.” Yeah, that’s the calibre of “argument” we’re dealing with here.

It might not be so insidious if ATI were just an isolated bunch of extremists. Instead, unfortunately, they are part of a massive, well-funded, not to mention evil effort to harass climate scientists, waste their time and prevent them from doing their urgently important work, and deny/minimize climate science in service of their fossil fuel industry masters. Not surprisingly, another big-time fossil fool, Ken Cuccinelli, also was a big player in all this, as were numerous right-wing publications and organizations, a few of which Mann is suing for defamation (if he wins, which is quite likely, I sincerely hope he sues a bunch more of them).

Bottom line: we should all celebrate, along with Michael Mann, this “victory for science, public university faculty, and academic freedom.” Hopefully, as Mann writes, this ruling “can serve as a precedent in other states confronting this same assault on public universities and their faculty.” I’d add the hope that this ruling, along with Mann’s likely victory in his defamation case, make these anti-science, anti-environment, fossil fuel tools think twice before they try anything like this again. More importantly, if we can clear out all the trolls in our path, we need to make rapid progress in combating climate change, first and foremost via a rapid transition off of fossil fuels and into a clean energy economy.