The following results (see below) from the recent Brentsville district (PW County) supervisor race just boggle my mind. Now, just to be clear, I’m not saying the Democratic candidate was favored to win this race or anything. On the other hand, I would note that there were two Republicans (Jeanine Lawson and Scott Jacobs) running, so theoretically they could have split the Republican vote and given the Democratic candidate (Eric Young) a chance to pull off an upset.

Keep in mind that this district, while certainly a “red” one, still saw Democrat Mark Herring getting 45% of the vote in 2013 (14,418 votes for Herring). That’s not a win, but obviously it’s a whole lot better (five times better to be exact) than 9%!

Also in that same November 2013 general election, the Democratic House of Delegates candidates (Atif Qarni, Reed Heddleston, Richard Cabellos) with precincts in Brentsville received a combined 43% of the vote (14,414 total votes for the Democratic candidates). So, again, how does a Democrat only get 346 votes (9% of the vote) in a special election in those same precincts, 13 months later? I mean, I “get it” that Democrats have more trouble than Republicans do in getting out their voters for these types of non-presidential, non-gubernatorial, special elections, but still.

Any thoughts? Was it the Democratic candidate (who I’d never heard of prior to these results) or something else going on?  Keep in mind that the winner, Jeanine Lawson, is a Tea Partier extraordinaire, so it seems like we could have at least motivated our “base” to come out and vote against her. Or am I missing something here? 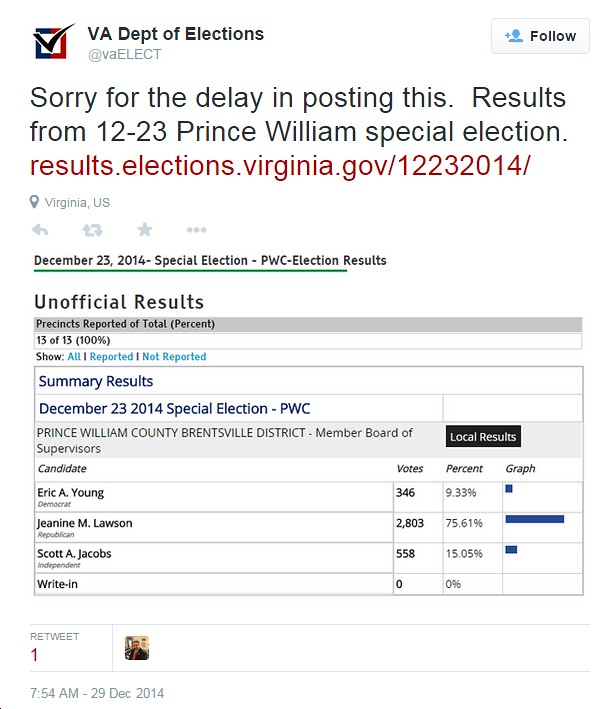 It’s Been 14 Years Since the “Macaca” Incident: Some Thoughts…and an Update on What Jim Webb, George Allen Have Done Since Then