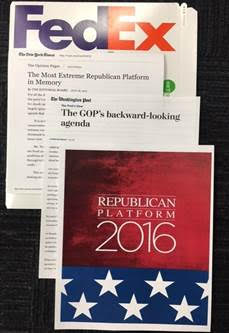 Since longtime political operative Barbara Comstock decided against attending Trump-mania in Cleveland this year, we were gracious enough to send her a convention package with everything she missed. During the 2012 Republican Convention, Barbara Comstock spoke for Mitt Romney. This year, Barbara Comstock missed out on all the fun because she desperately doesn’t want to remind Northern Virginia’s moderate voters how closely she aligns with Donald Trump’s reckless agenda. The platform adopted at the convention by the party of Trump is troubling for Comstock and includes Trump’s central policy proposal  – construction of a border wall. The platform also includes other troubling ideas – like discriminatory conversion therapy  pushed by the conservative Family Research Council.

You can track this FedEx package by using this tracking number: 783624612308. Also keep in mind that this is how Comstock thinks we should track immigrants.

“We know career political operative Barbara Comstock is hurt dearly by having to avoid the Republican Convention this year because she doesn’t want Northern Virginians to know how close her policies are to Donald Trump’s,” said Jermaine House of the DCCC. “This package will help Barbara Comstock get over the grief of having to stay home while Donald Trump and her reckless House Republican colleagues put the Party’s dysfunction on full display.”