A press release (I’ve posted it at the bottom of this article) on Tuesday from Virginia House Speaker Bill “ALEC” Howell (R) and Company cites a study by “JLARC” (Virginia’s Joint Legislative Audit and Review Commission), which finds “incredible growth in [Virginia’s] Medicaid program” and which supposedly “demonstrates the wisdom of our decision not to expand Medicaid under the Affordable Care Act.” (I know – hahahahahahaha!)

Medicaid remains the largest growth driver in our budget. This is exactly why we cannot afford to expand Medicaid. The existing program is simply unsustainable, without the additional burdens of expansion.

So…how to put this delicately? Ah, screw it – this is wildly misleading bull**** by Virginia House Republicans! Why do I say that? First, check out this excellent Daily Press article by Travis Fain, which points out that:

“Medicaid spending isn’t up nearly as much as Republicans would have you believe.”

So what’s going on here with Republicans’ wild exaggerations and distortions (aka, “lies”) about Medicaid costs? As usual, it’s Republicans’ fear of the Tea Partiers, who hate hate hate hate hate “Obamacare” (and the President who it’s named after) and want to kill it DEAD! Ergo, Republicans’ constant efforts to demonize this program, to sabotage it in various ways, to exaggerate its problems/costs/etc. and ignore and/or minimize its successes.

Not that you’ll hear stuff like that mentioned by Virginia House Republicans anytime soon – or ever.

Meanwhile, not only are Republicans hell-bent on killing the evil evil evil “Obamacare,” they are massive hypocrites as well. Why? Because, as this Virginian-Pilot piece by Shawn Day explains, the Virginia GOP itself has actually expanded Medicaid (Medicaid expansion being a key component of “Obamacare”) in Virginia. As Day points out, Republicans “don’t like to admit this, of course,” but (note: bolding added by me for emphasis)…

With one hand, they’ve expanded Medicaid at an almost fiscally reckless pace, ignoring the need for better cost controls and stewardship of taxpayer dollars, while simultaneously rejecting expansion of Medicaid through tax dollars already paid under the federal Affordable Care Act…

That portion of Medicaid serves the aged, blind and disabled. About one-third of Virginia’s Medicaid patients are enrolled in long-term care. It pays directly for services, rather than proactively coordinating care, and consumes two-thirds of Medicaid’s budget, driven by high payments for in-home care, adult day care and more.

This year marks the first time that House lawmakers have put conditions on new slots, called waivers, for community-based, long-term care. That’s important because the fee-for-service costs have skyrocketed as lawmakers have added more waivers and increased funding for related healthcare services. And they have funded more waivers than the numbers required under an agreement with federal officials to transfer disabled patients out of institutions and back into the community.

In 2004, waivers for the developmentally disabled, intellectually disabled and the aged and blind totaled about $341 million. By 2013, the cost of such waivers had more than tripled to nearly $1.2 billion. And that didn’t include the hundreds of millions more spent annually to provide health care services – medical tests, procedures, etc. – to those patients.

This decade of growth provides some context for Republicans’ oft-repeated complaint that Medicaid has increased 1,600 percent over the past three decades. It’s also worth noting that the bulk of state investigations into Medicaid-related fraud, as reported by the Attorney General’s Office, involve long-term care. The same kind of care that Republicans have readily expanded year after year.

See the graphics below for a visual depiction of some of this – massive growth in costs for “ID” (intellectually disabled) and “DD” (developmentally disabled) programs, and also the fact that the disabled “make up 19% of Medicaid enrollees but 48% of Medicaid spending.” And, to their credit, Republicans generally have been supportive of taking care of people with intellectual and developmental disabilities, even if it costs a great deal of money to do so. But then, for Republicans to complain about the skyrocketing cost of Medicaid is a bit “rich,” given that “ID” and “DD” costs make up such a large, and growing, share of overall Medicaid cost increases.

So yeah, Republicans here are being wildly hypocritical, trying to have things both ways: complain about the rise in Medicaid costs (which they largely voted for) as one way to argue against further expansion Medicaid, as part of the “Obamacare” program they (irrationally) hate so much. Even more maddening is Republicans’ picking and choosing of people they deem “worthy” of healthcare coverage: “ID” and “DD” people deserve it, but the working poor don’t apparently.

If this all sounds crazy, perhaps it really is. Or maybe it’s just that great oxymoron, “Virginia Republican logic when it comes to Medicaid expansion, Obamacare and health care in general.” 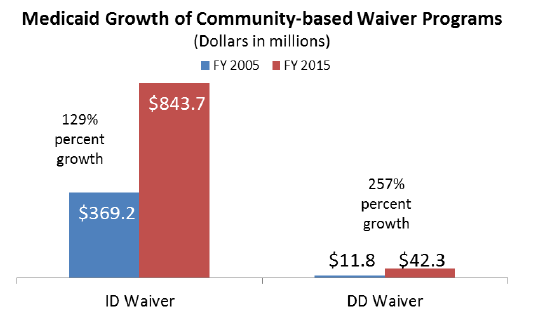 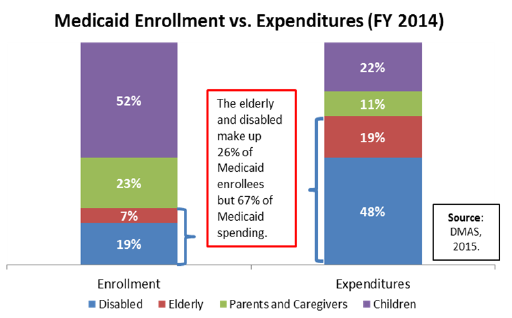 ~ 2016 findings are consistent with previous reports ~

“Like last year, today’s JLARC report once again shows that the Republican-led General Assembly is charting a responsible fiscal course for the Commonwealth,” said House Speaker William J. Howell (R-Stafford). “State general fund spending continues to decline when adjusted for population and inflation as a result of our conservative budgeting. However, Virginia is still grappling with incredible growth in its Medicaid program. Medicaid spending grew 96 percent in the last ten years. This report again demonstrates the wisdom of our decision not to expand Medicaid under the Affordable Care Act.”

“The General Assembly continues to strike a sharp contrast with the failed leadership in Washington, D.C.,” said House Majority Leader Kirk Cox (R-Colonial Heights). “While the federal government languishes under $19 trillion in debt and is simply unable to balance its budget, we have proven time and time again that we can balance our budget, close shortfalls without raising taxes, and chart a prudent long-term fiscal course. This report validates our long track record of responsible budgeting.”

“My colleagues and I on the House Appropriations Committee consistently seek to be good stewards of taxpayer resources,” said House Appropriations Committee Chairman S. Chris Jones (R-Suffolk). “Our goal is to make each taxpayer dollar go further. I am proud of our work and thankful for the continued commitment of the members of the committee and its staff to this steady approach.”

“The JLARC report shows that the Commonwealth is on a stable fiscal foundation. We have a long track record of responsible state spending,” said House Appropriations Committee Vice-Chairman R. Steven Landes (R-Augusta). “However, we cannot ignore the truth on Medicaid. Medicaid remains the largest growth driver in our budget. This is exactly why we cannot afford to expand Medicaid. The existing program is simply unsustainable, without the additional burdens of expansion.”

Sen. @MarkWarner: "I will be shocked if we don't end up with much closer to 20 and maybe even more Republicans supporting this legislation." https://bluevirginia.us/2021/06/thursday-news-climate-change-tipping-points-are-upon-us-draft-u-n-report-warns-bidens-patience-may-have-delivered-a-breakthrough-on-infrastructure-joint-chiefs-chair-milley-schools-ma#comment-5431976070