In Blackstone, Virginia this week, Dave Brat wrote the final chapter of his book on how NOT to hold a constituent town hall.  If your sole measure is an absence of violence or property damage, or the speaker not bolting early under police escort, then the event was a resounding success.  But it was a decided failure in terms of meaningful dialogue with constituents, which is not the former professor’s strong suit.  Here are the lessons learned about what not to do, in case Brat feels compelled to step up his game for the next one – which better be scheduled soon if he plans to keep pace with the “over 500 meetings” he now claims to have had during his first full term in office. 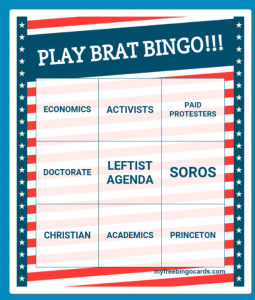 On the other hand, the warm hospitality of the Town of Blackstone was greatly appreciated.  Mayor Coleburn listened attentively to numerous 7th District citizens who called him over the preceding week with logistical concerns, and did his best to make sure the event was safe and that all who made the effort to drive there could at least hear what was going on.  The block was closed to traffic; there was ample, congenial police presence; and the outside sound system was better than anticipated.

There was one issue on which everyone, including Dave, agreed, raised by a resident of nearby Crewe: improving internet access in the rural parts of the 7th District.  That may mean we are in for more Facebook forums and fewer in-person, but if we are just going to keep hearing the same stock non-answers time after time, why leave the comfort of our couches?

To be fair, Brat did say a few things I had not heard from him before, both equally appalling:

Blackstone was the third forum of Brat’s that I have participated in over the last month, and I have come away feeling bludgeoned repeatedly by cold, empty ideology.  He accuses “the left” of not wanting to discuss policy, but that false claim is really a projection of his own inability to participate in meaningful, two-way conversation on a level deeper than a regurgitation of the Republican Creed and the Judeo-Christian, Free Market yada yada.

Dave Brat clings to an impersonal credo that emphasizes principles over people.  He’ll gleefully tell you he has “200 pages of principles,” in a thinly-veiled reference to his aforementioned book, but has yet to move beyond the abstract to connect on a human level with his constituents.  There is a difference, Dave, between espousing principles and being principled.

Monday News: “Can Sci-Fi Wake Us Up to Our Climate Reality?”;...