Finally, almost a year after he promised to visit with the communities affected by pipelines, Governor Northam made it to Bent Mountain. Accompanied by Communications Director, Brian Coy, and his dog, Murphy, Northam was met by Beth, a close friend of protester Red Terry. Red has been living at the top of a tree since April 1 to protect her property from the pipeline company, which has convinced a federal judge to grant them easement onto her property against her will, to clear a path through her property for the pipeline. .

As they walked across the muddy land and made their way carefully over the makeshift bridge formed out of a few pieces of lumber, Beth pointed out how high the water level was, and explained that this type of flooding was expected after trees and foliage were cleared for pipeline construction, since deforestation causes more water to fall to the ground, less to be absorbed into the roots, and a more rapid runoff. 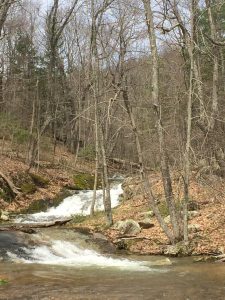 Murphy ran off and jumped into the stream, while Northam climbed up to the other bank, where Red’s camp, nicknamed Camp WANGA, is located. The camp is full of handmade signs and banners, some angry, but most just expressing love and solidarity with Red. 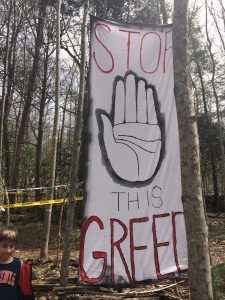 There was a crowd of people from the community in attendance. One man explained “we’ve been waiting a long time for him to come here.” Another woman walked up to the Governor and said, “Please, you’ve got to help us. This land has been in my family for generations, how can I pass it on to my children and grandchildren with a ticking time bomb running right through it?” 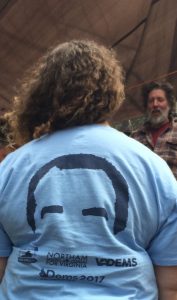 The Governor called up to the treehouse, where Red, the protester who has brought the pipelines back into the news cycle, is living.
“Hi Red!” he called up awkwardly. “How are you doing up there?”
Red called back down to him, “Nice of you to finally come!”
Northam shouted up, “Do you need anything, Red?”
Red laughed angrily. “Yes I do, Governor; don’t let this cancer spread in Virginia. Don’t be like your predecessor who sold us out!” 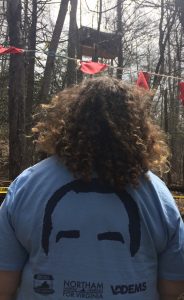 Northam spoke to the crowd, mostly reiterating his oft-stated position: the pipelines are a federal issue, it’s really out of his hands, we have to leave it up to the regulatory agencies to do their job. He talked about how strong the regulatory process had been so far, but the crowd wasn’t buying any of it. One man, a tall guy with a white beard, yelled out “You promised us a stream-by-stream assessment! MVP LIED about not crossing any tier 3 streams–THIS is a Tier 3 stream right here!” The Governor tried to answer, to say that the pipelines wouldn’t be built if they couldn’t be built safely, that the DEQ would guarantee that. But at this point, the crowd was turning their backs to him, and booing him.

We’ve all heard this “it’s a federal issue” dodge before. But it’s just not true–Virginia has the full authority to reject the MVP and the ACP by deciding it does not meet our state water quality standards. The crowd got more agitated, and Northam’s security detail said, “Governor, we need to leave.” So the Governor turned around and made his way back down the trail and over the makeshift bridge. 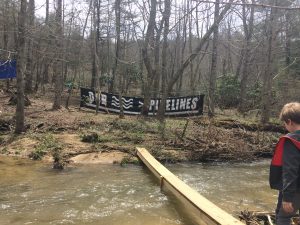 But just as he crossed the creek whistling to Murphy, a young girl on the trail – no more than 10 years old, called out to him, “Governor, have you said hello to Minor, Red’s daughter?” The Governor looked her direction. “No,” he replied, “where is she?” The girl walked off down another trail, and the Governor and his security agent followed, the crowd still staying behind with Red. The girl stopped, and pointed up to another tree, “There she is!” she said.

Northam’s shoulders seemed to slump a little as he looked up to see Red’s daughter, in her own treehouse. He called up to her, introducing himself. They made a little small talk, and then Minor teared up and said, “Governor, why won’t you help us? You’re the only one who can protect our water and our land.” The Governor looked into her eyes, started to mumble something, but seemed to struggle to find the right words. He wiped away a tear himself.

Then he turned to Brian Coy and said. “I’ve seen enough. Start writing a press release. I Stand With Red. I Stand with Minor. Let’s set up a meeting with Paylor and Strickler first thing in the morning.”

[This is, of course, an entirely fictional account. Because the real Governor Northam, despite his promise to visit the communities affected by the proposed pipeline, has so far failed to do so. This story was motivated by my (idealistic) sense that anyone who walks this land, stands on this mountain, surrounded by these trees and this natural beauty, that anyone who talks to the families, the people here and feels their pain and frustration, would do anything in their power to stop this tragedy from happening.]