RICHMOND, Virginia– Concerned citizens protested outside of Governor Northam’s office and at the Capitol Grounds in opposition to the Atlantic Coast and Mountain Valley Pipelines and in opposition to the harmful effects these projects have on communities along their proposed paths. From 10:00 to 10:30am, fifteen activists chanted, sang and spoke about the threats raised by the MVP and ACP. At 10:30, members of the group, some who had traveled from their homes in Nelson and Buckingham Counties, delivered a letter and two gifts to the Governor. This was followed by a rally at the Bell Tower from 11:15am to 12:00pm. These actions, which will next occur on Wednesday, May 2, 2018, continue the weekly protests addressing issues related to the two fracked-gas pipelines. 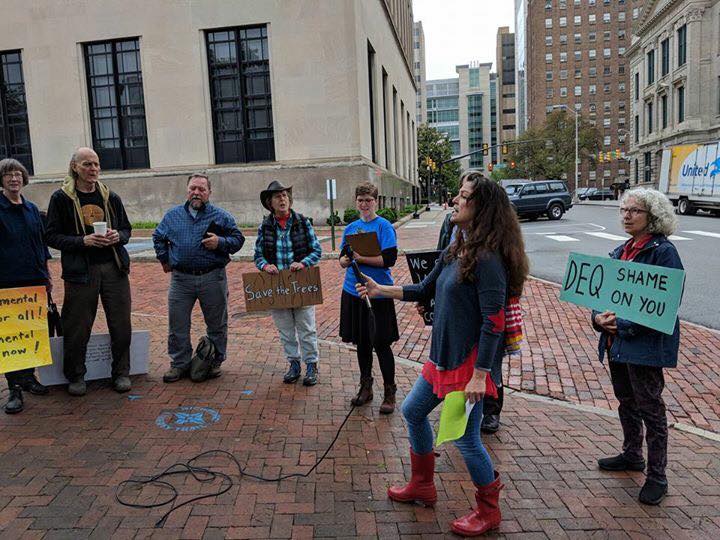 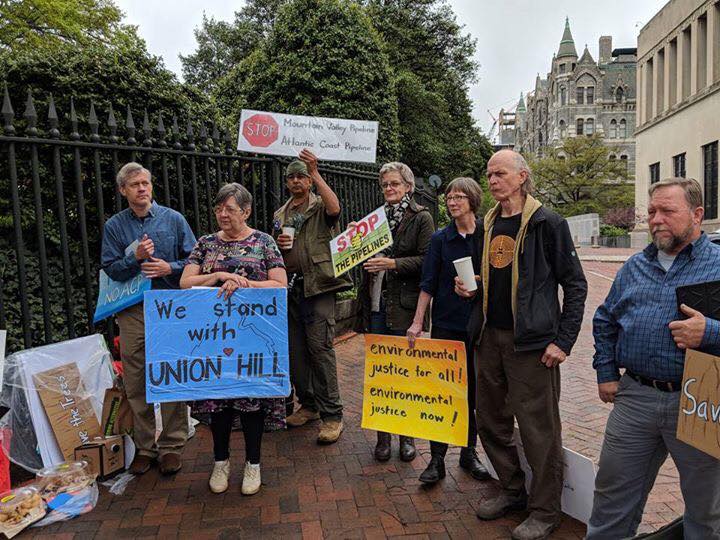 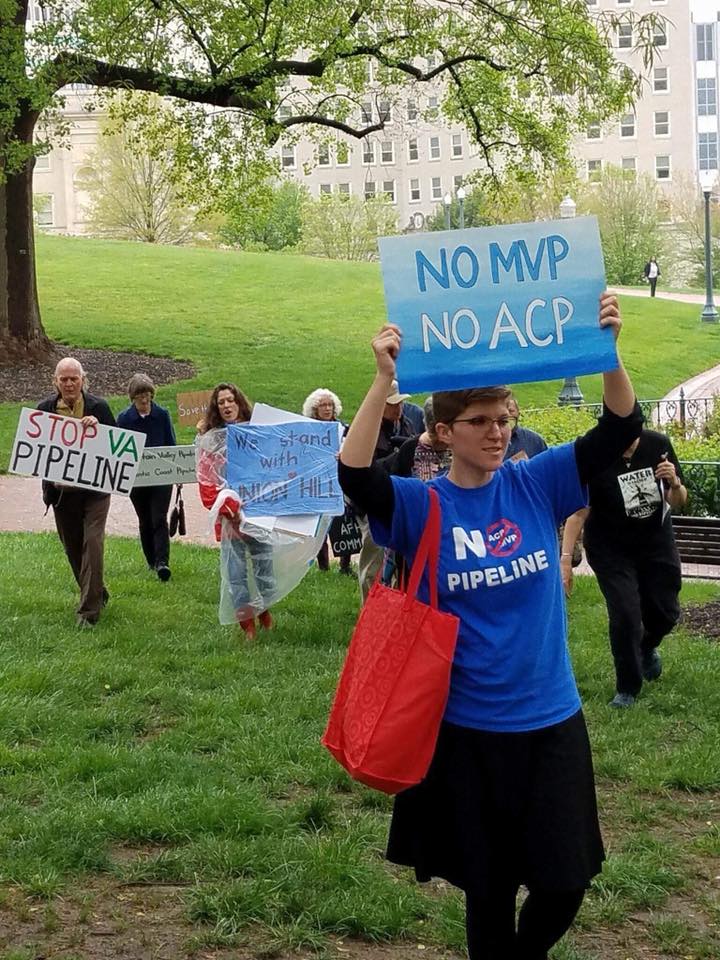 The fifteen activists gathered behind the Office of the Governor to highlight Northam’s history of ignoring, and through his inaction, endangering, communities along the proposed paths of the pipeline. Some of those in attendance had traveled from their homes in Buckingham and Nelson Counties, to deliver their message and concerns directly to the Office of the Governor. Several of the activists delivered a letter, a collection of statements from affected landowners and community members, and two gifts to the Governor via meeting with a representative from Constituent Services. The two gifts were original works of art referencing the ACP and MVP. Since the monetary value of gifts to the Governor must be reported, the gifts were reported to be valued at $58M and $27.5M.  These numbers are representative of amounts in the Memorandums of Understanding regarding the pipelines that former Governor McAuliffe signed in December 2017, and that Governor Northam refuses to rescind. After the delivery, the group walked together, while singing “People Gonna Rise Like the Water,” to the Capitol Grounds Bell Tower, where they shared their thoughts and concerns. A 125-foot “scar” made of red fabric was unfurled to demonstrate the width of the easement required for each pipeline, a width that would swallow the Executive Mansion. With the “scar” displayed behind them, four of the affected Virginians spoke in person at the event, and the submitted statements from an additional four affected Virginians were read aloud. As landowners and members of affected communities, they spoke of the immediate negative impacts the pipelines have had on their towns including: environmental effects, loss of income, abuse of eminent domain and safety concerns. The event concluded with chants encouraging those fighting these ruinous projects, including the tree-sitters in the Western part of the state, to continue in their efforts. After the Bell Tower rally, participants went to lunch together.  This event was in support of the Virginians affected by the pipelines that Governor Northam continues to ignore and whose region he refuses to visit.

Statements from Landowners and Members of Affected Communities:

Priscilla Sonne, Nelson County: “I believe that these pipelines are ill conceived and present a danger to not only those whose property had been taken by eminent domain, and those who live in the area of consequence, but for everyone. I chose to fight these pipelines for everyone affected by them and for future generations who will have to live with what we allow to be done to the land.”

Sharon Ponton, Nelson County: “Private security operatives have been and continue to be active in counties along the path of the Atlantic Coast Pipeline (ACP). A speaker who identified himself as Dominion security at a meeting in North Carolina described his trip to Standing Rock, North Dakota, and then proceeded to tell the attendees that Dominion was “monitoring potential resistance, including local opposition” to the ACP. The implications were clear, and his further comments were a not-so-subtle attempt to paint local opponents as “radicals”—local citizens like the teachers, farmers, ministers, firefighters, doctors, parents and grandparents throughout the counties targeted by the ACP. Undoubtedly, MVP private security practices are similar.”

Marilyn Shiflett, Nelson County (Submitted statement read at event):” I find it difficult to articulate what is happening to my community since the Atlantic Coast Pipeline was announced. While it could be argued that most residents think it’s inevitable and are hopeful that life will not change, those of us viewing this project in detail, know different. Landowners who were once simply “neighbors” are now brothers and sisters.”

William Limpert, Bath County (Submitted statement read at event):”They have stated that this is the most comprehensive pipeline review ever. Most recently, they are advising that the new “stop work” authority in state law will be an effective enforcement tool. It won’t. I applaud Senator Deeds for introducing the bills that would have stopped all construction on the pipelines if water quality violations were found. Those original bills would have been a powerful enforcement tool and would have reduced water pollution from these projects. Nevertheless, the legislature knocked the teeth out of them by reducing the stop work authority to only the relevant area of the project. I’m sure Dominion threw that punch.”

Irene Leech, Buckingham County (Submitted statement read at event): “Since 2014, we have repeatedly stated our need to move the path of the pipeline to the edges of our fields to reduce the harm to our business. They refuse to consider our business needs or safety concerns. There are many things wrong with this process. It could even force us out of business. Buckingham County has many expert loggers but the ACP’s trees were cut by out-of-state contractors. We see wildly exaggerated local benefits and ignored costs, which will fall to businesses like ours. We’ve sought your help several times but have not gotten any response. We are being forced to spend tens of thousands of dollars and years of time to attempt to protect our business and our net worth. So far, our needs, like those of the others whose land is being taken, have been completely ignored. Please help.”

Pastor Paul Wilson, Buckingham County (Submitted statement read at event): “To the Honorable Gov. Northam of The Commonwealth of Virginia.  I have requested on numerous occasions to this and the past administration that you take a closer look at the perils and shortcomings of the proposed ACP and Compressor station as it affects the residents of Buckingham Co.  Especially our immediate impacted area of our community, church & congregation that has been intentionally omitted and minimized in every report/ publication etc. by proponents of the ACP. Please listen to the people.  Come see for yourself & witness the true impact of what is really going on. I implore you to stand as a true Governor of Va. Stand above the politics of the “dollar” and do not make or cause rural Virginia to be the “sacrificial lamb” of this erroneous act against nature & mankind.  Many of us voted for you. DOMINION DOES NOT WANT YOU TO COME TO BUCKINGHAM until after they get WHAT THEY WANT.”

“We stand with you, and all affected landowners and community members. We stand with the low-income, Indigenous, and African American communities, like that in historic Union Hill, who were racially and economically targeted by the modern day colonialism practiced by pipeline companies. We stand with Red. We stand with Minor. We stand with all of the sitters, all in the camps, and all those resisting these pipelines.  We are so grateful for the inspiration of all of these landowners, communities, and people resisting, whose courage in the face of injustice is helping save the tomorrow of future generations from the wrongs of greedy corporations and politicians today.  These people are doing the job that the Governor and his Department of Environmental Quality refuse to do.”

“Governor Northam, will you stand with us? Will you stand with the tree sitters, the monopod sitter and with those camped with them, trying to support their health, safety and welfare, as the pipeline companies, Forest Service and local law enforcement prohibit basic human necessities being delivered to the peaceful protestors? Will you stand with the health and safety of Virginians, our watersheds, our land and our future? Stand up against polluters, political corruption, Stop the Mountain Valley and Atlantic Coast Pipelines now.’

The next weekly protest will be held Wednesday, May 2 from 10-10:45am behind the Office of the Governor.

Audio: Donald Trump Explains “what disappoints me about Youngkin,” Who Trump...