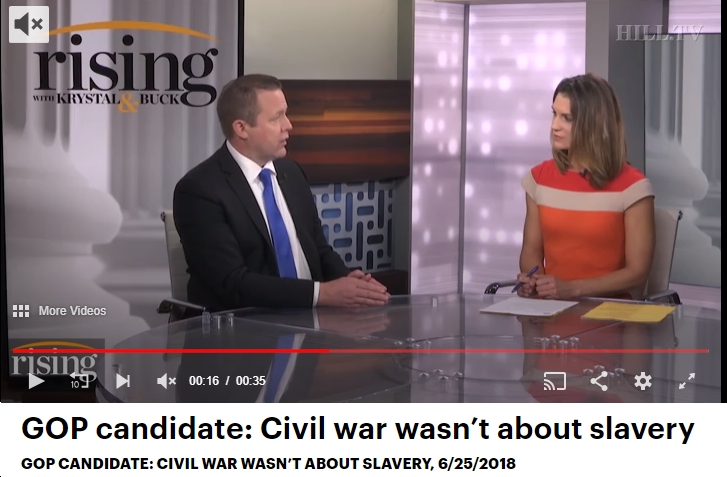 Virginia GOP U.S. Senate nominee Corey Stewart hit yet another new low this morning, this time in his disastrous (error-strewn, bizarre, etc.) appearance on Hill.TV this morning. Let’s count the ways Corey said things that were blatantly false and/or demonstrated abysmal ignorance of a bunch of important things.

First, we’ve got Corey’s comments about the Civil War, and specifically his bizarre, revisionist history that it was not “ultimately fought over the issue of slavery.” As Tom Perriello sarcastically inquires (see tweet below), “Corey Stewart knows the Confederacy better than Confederate founders who explicitly included slavery as caucus belli? Better than Confederate President Jefferson Davis, who cited it repeatedly as cause?” As Tom Perriello adds, #RealHistoryMatters, unlike the fake stuff spewed out by neo-Confederate Corey Stewart. 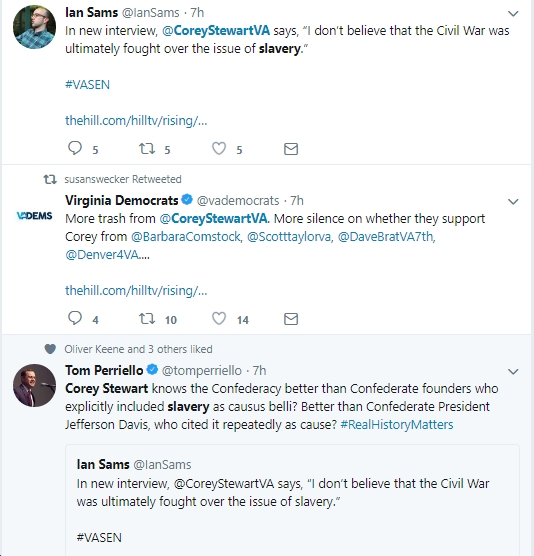 In fact, as the National Parks Service explains (bolding added by me for emphasis), “A number of issues ignited the Civil War: states’ rights, the role of the federal government, the preservation of the Union, the economy; but all were inextricably bound to the institution of slavery.” Also see this 2011 NPR report, which notes that “Many a revisionist says [the Civil War] was about state’s rights,” despite the fact that “Southerners in 1861 were fairly certain the war was about slavery,” with the Confederacy’s Vice President Alexander Stephens stating point blank that the Confederacy’s ” foundations are laid, its corner- stone rests, upon the great truth that the negro is not equal to the white man; that slavery subordination to the superior race is his natural and normal condition.” And as historian Adam Goodheart explains (bolding added by me for emphasis):

When you go back and you look at the actual documents, many people have said since then that it was about states’ rights, but really the only significant state right that people were arguing about in 1860 was the right to own what was known as slave property — property and slaves unimpeded — and to be able to travel with that property anywhere that you wanted to. So it’s clear that this was really about slavery in almost every significant way…

So the bottom line is that Corey Stewart is 180-degrees wrong, and in an extremely noxious way, in his bizarre opinion that the Civil War was not overwhelmingly about slavery.

As if that wasn’t bad enough for one off-the-rails interview, Corey Stewart also completely botched almost every aspect of his response to host Krystal Ball’s questions on immigrant family separations by the Trump administration. As The Hill reports, Stewart ” stumbled over a question about what mandated the separation of children and parents at the southern border,” falsely inventing some make-believe law supposedly passed by Democrats for this problem. In fact, as The Hill explains, “it was [the Trump] administration’s ‘zero tolerance’ immigration policy, which expedited the prosecution of people caught crossing the border illegally, that led to families being separated.” Stewart than babbled incoherently the rest of the way through that part of the interview, at one point claiming that the president can “set aside” an “existing federal law” – the one Stewart invented, since it doesn’t exist – regarding whether or not children should be separated from their immigrant parents.

Bottom line: neo-Confederate Corey Stewart is an ignorant buffoon and demagogue who has absolutely no business being in the U.S. Senate. Clearly, someone like this has no business being the nominee of a major political party in this country, yet here we are, with the Virginia GOP mostly standing by neo-Confederate Corey. Pretty much tells you all you need to know about the Virginia GOP, eh?