A few pictures speak a thousands words, as the saying goes. In this case, they speak about the evolution of Virginia from “red” to “blue,” and of a few significant jurisdictions – Fairfax, Prince William, Loudoun, Henrico, Chesterfield, Virginia Beach, etc. – since 2005. Note that I’m using Scott County as a proxy for Appalachian/far-Southwest Virginia. See below for the graphs and some key takeaways.

First, it looks like Virginia’s statewide Republican share of the vote has hovered in the 44%-49% range since 2005, with two exceptions: a) Bob McDonnell in the Republican wipeout year of 2009, when the Tea Party was super energized, when Dems were asleep/not voting and when McDonnell ran (deceptively) as the moderate “Bob’s for jobs” candidate – and won big time (59%); b) 2018, when Republican U.S. Senate nominee Corey Stewart ran a nasty, self-described “vicious” campaign based on anger, fear, xenophobia, etc. – and underperformed the historic Republican share by a few points (Corey got 41%). 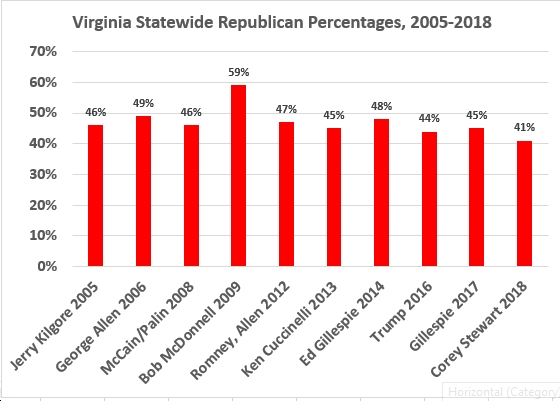 As for the state’s largest county, with around 1.1 million people, Fairfax County has trended increasingly “blue” since 2005, when 40% voted for Republican Jerry Kigore for governor, to 2016-2018, when only 29% voted for Trump and 27% for “Trump before Trump” Corey Stewart. Bottom line: suburban Northern Virginia does NOT like Trump, Trumpism, or Trump look-alikes. It DOES like Republicans running on a jobs platform, like Bob McDonnell in 2009, who won 51% of the vote in Fairfax County, albeit in a year when Dems largely stayed home because…don’t ask. 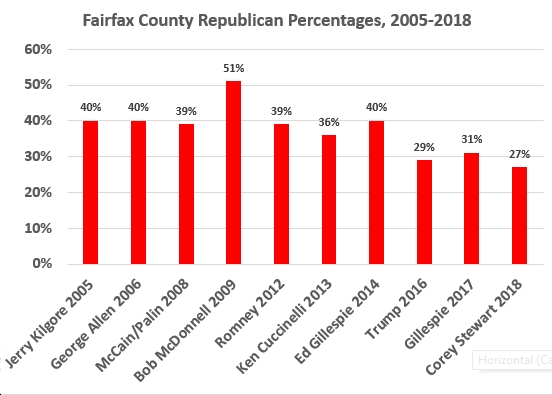 Chesterfield County also doesn’t seem to be a big fan of Trump, and even less so of Trump wannabes like Corey Stewart (who only got 44% of the vote in Chesterfield this year). Overall, it appears that Chesterfield is trending less and less “red” over time, from 54% in 2005, 66% (!) in 2009, 53% in 2014 to…under 50% since 2016. Let’s hope this continues, with the help of folks like the Liberal Women of Chesterfield County, changing demographics, etc. 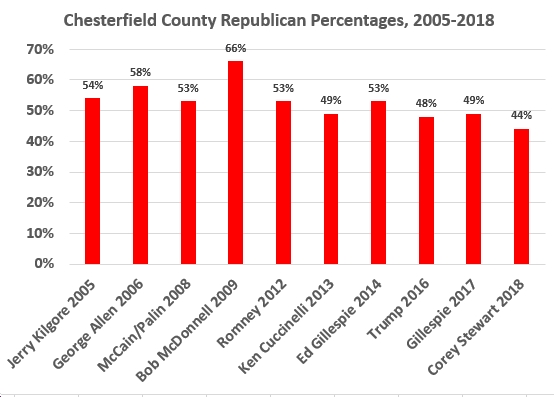 Henrico County has gone from purple to strongly blue, particularly in the past few years, with only 37% voting for Trump, 38% for Gillespie’s nasty/xenophobic 2017 campaign and just 33% (!) for neo-Confederate Corey. Yet more evidence that suburbia does NOT like appeals to racism/white nationalism/xenophobia, anger, fear-mongering, etc. 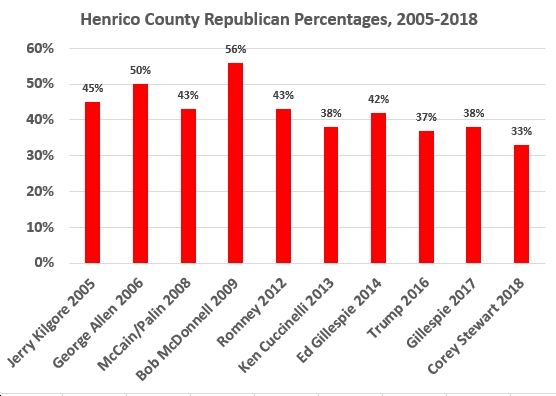 Prince William County is “majority minority” and also increasingly “blue, going from 48% Republican in 2005/2006 down to 38% in 2016/2017 and just 33% for its native son, Corey Stewart, in 2018. Basically, Republicans are now on life support in one of Virginia largest, most diverse and fastest-growing counties. 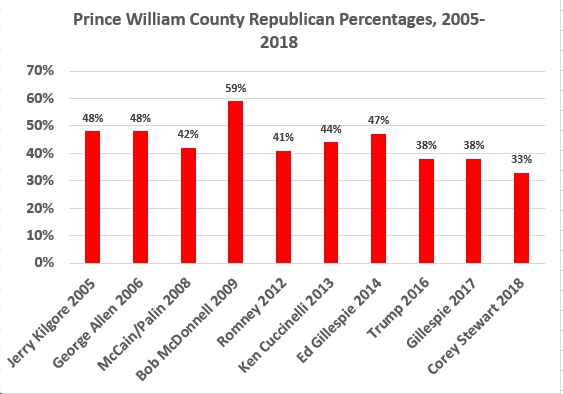 Another large, fast-growing county is trending strongly blue in the age of Trump, going from 61% for “Bob’s for Jobs” in 2009 to just 35% in 2018 for neo-Confederate Corey. Yet again, suburban voters don’t like the hard-edged, extreme version of the Republican Party. 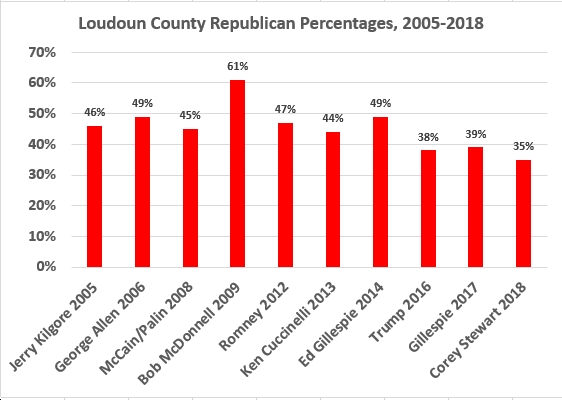 Virginia Beach was around 50/50 for years, but maybe 2018 marks a turning point, with only 43% going for Corey Stewart? We’ll see if Virginia Beach bounces back for the Republicans next time – assuming Republicans don’t keep nominating extremists. 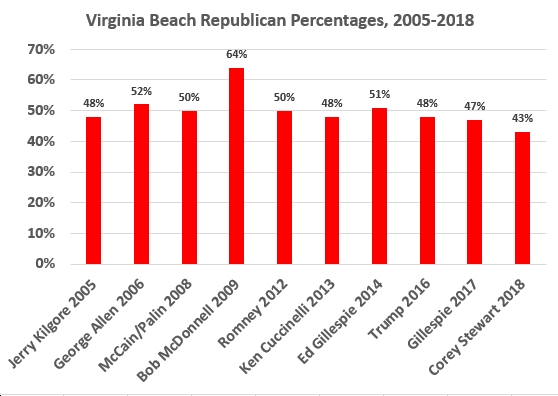 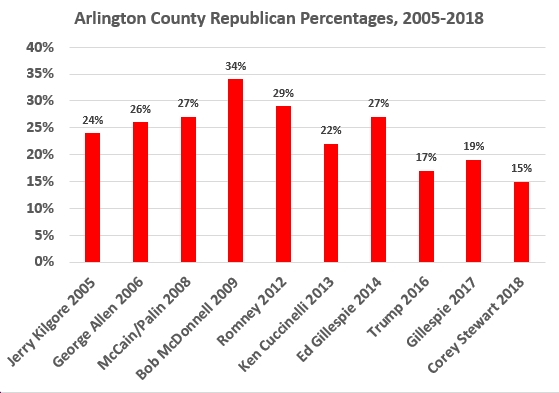 Finally, here’s far-southwestern-Virginia Scott County, which we’ll use as somewhat of a surrogate for Appalachian Virginia. Basically, there hasn’t been a huge change here in voting patterns since 200%, but if anything they seem to LIKE the harder-edged, more Trumpian-style Republicans (82% in 2016 for Trump, 77% in 2018 for Corey vs. 73% in 2005 for Jerry Kilgore). 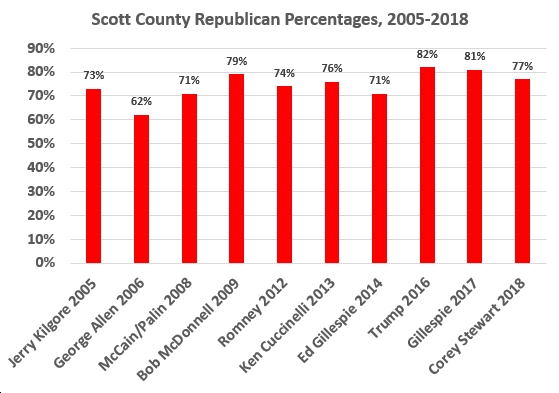 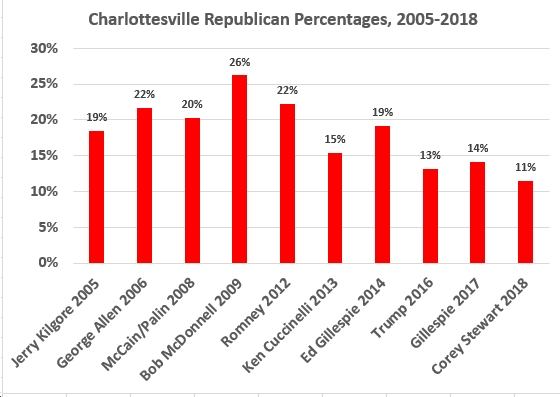 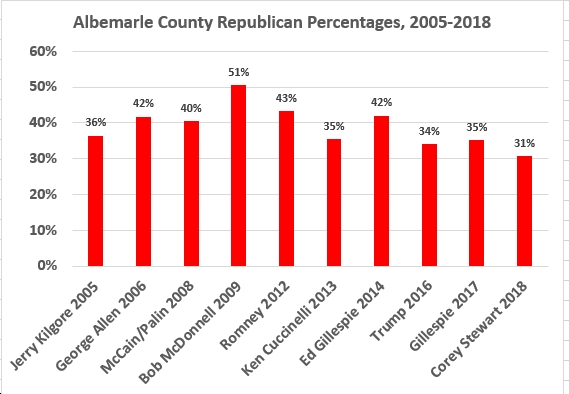 UPDATE #2 – Added Fauquier County (hasn’t particularly changed since 2005) and Stafford County (2018 was the first time it popped below 50% for a Republican statewide candidate since 2005)…. 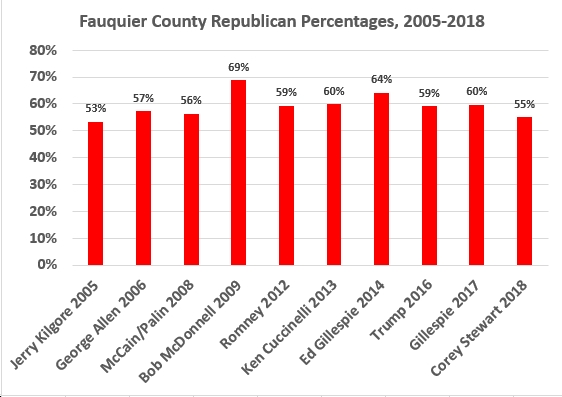 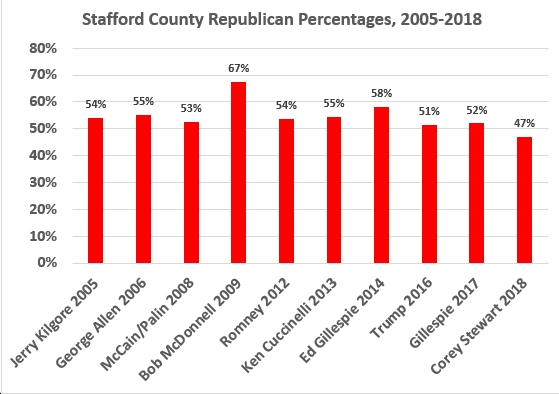