As if Virginia politics weren’t “interesting” enough already…another story – apparently erroneous/sloppy – has been published about a leading Virginia Democrat (Lt. Governor Justin Fairfax) on far-right “Big League Politics” (I’m not even going to link). See below for Fairfax’s emphatic denial. Note that Fairfax could quite possibly become Viriginia’s governor in the near future, if Gov. Northam resigns.

P.S. For more on “Big League Politics,” see Site Behind Northam Revelations Is Backed by GOP Operatives and also this Washington Post story (“In its short existence, the website has reliably boosted Trump, attacked Democrats and liberal figures and written many articles promoting a discredited conspiracy theory popular among far-right conservatives about the murder of a young Democratic National Committee staffer named Seth Rich in 2016.”). Also note that this right-wings slime site’s story on Ralph Northam contained major journalistic errors, such as stating AS FACT that it was Northam in either the KKK costume or “blackface” makeup, even as that has NOT been confirmed – and in fact has been denied by Northam. So yeah, this site has Z-E-R-O credibility. 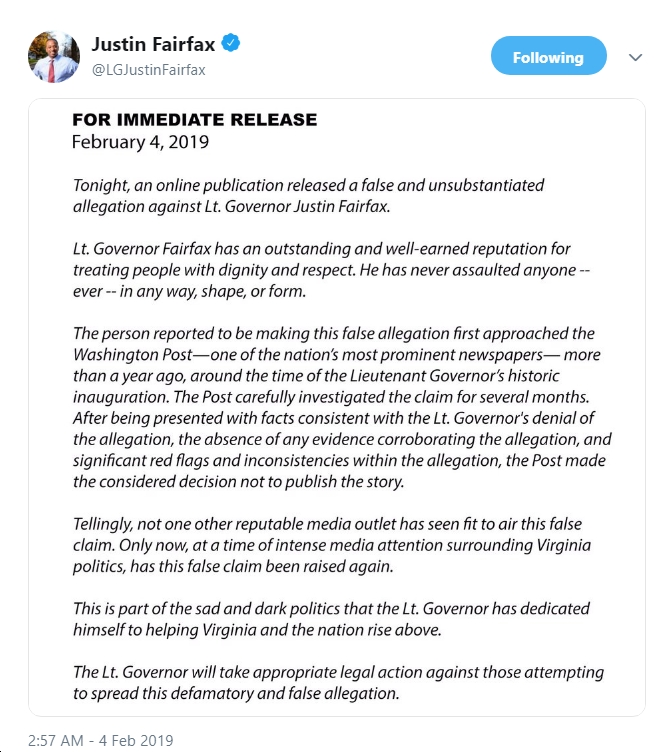