This is…interesting, I guess. Earlier today, CNN Chief White House Correspondent Jim Acosta – who had his White House press pass pulled last November, following “an unusually contentious press conference held by President Trump in the East Room of the White House in which the president called Acosta ‘a rude, terrible person'” – was speaking at Annandale High School, and Virginia Lt. Governor Justin Fairfax popped in to ask him a question about “due process.” See below for video of Fairfax’s question, and Acosta’s response, which basically was that “one of the rights that we have is due process, and that right, according to the judge in my case, was violated – they didn’t give me any rights, they just said, ‘hey Jim, your press pass has been taken away.'” Of course, in the case of Acosta, it was our authoritarian, anti-journalism “president” assaulting freedom of the press, whereas in the case of Justin Fairfax, he’s been accused by two women of sexual assault. So…definitely not comparable situations, although certainly the concept of due process is important for everyone in our country. 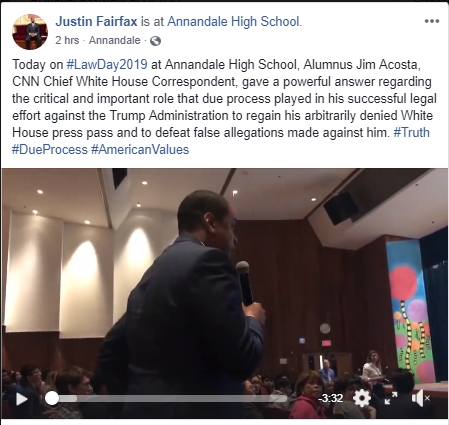