Ahhh, Fall is approaching, when Republicans put on their best costumes, and try to trick the voters, hoping for the treat of an election win. Sometimes you can barely recognize them. Like when Speaker Cox puts on his “nice guy handing out free ice cream to the neighborhood” costume–you’d barely recognize him as the person who fought tooth and nail to keep from having this very neighborhood drawn into his district! 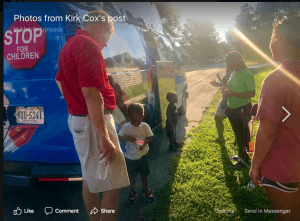 Or when John Whitbeck covers up his adoration of the racist, xenophobic, and divisive Trump, Pence, Spicer and crew, to wear his special election-time “I’m a moderate uniter” costume, “fighting back against the forces that seek to divide us, supporting our neighbors…” Who is that masked hypocrite?

But the latest trickster this week had my jaw dropping to the floor. In this hilariously unfunny new ad from Delegate Chris Jones, he wears the most creative costume yet. The Republican Delegate who chairs the House Appropriations Committee responsible for the Virginia budget, who has fought year after year to prevent the Governor from collecting hundreds of millions of dollars in federal funds to expand Medicaid, is now wearing an “I led the fight to expand Medicaid” costume! His ad describes how he followed in his father’s footsteps opening a pharmacy, and “that’s why he led the fight to expand Medicaid.” Led the fight by…making sure it came out of Governor McAuliffe’s budgets every single year? By voting against it FOUR TIMES?

Wow it’s dazzling–he’s completely unrecognizable! Now, I’m SURE this amazing flip-flop isn’t due at all to the fact that his district was drastically redrawn after the House GOP gerrymandered him into a cartoon-face shaped district that conveniently chopped out the heavily African-American populated parts of Suffolk. Right? Or to the fact that he has a challenger for the first time since 2005? 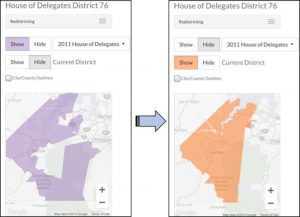 Voters deserve better than this trickster. Don’t fall for the whopper he’s selling! Take a look instead at Clint Jenkins, one of those voters who was conveniently chopped out of this district. He’s a Veteran, a community leader, a Democratic Congressional Committee Chair, and a real estate agent. His wife serves on the school board. More than anyone, he sees right through Jones’ election-year costume: “One of the main reasons people came to me asking me to run was to fight to protect their healthcare. Through my work with Civic Leagues, churches, and other local organizations, I’ve met a lot of people in Suffolk who benefited from Medicaid expansion. They could have benefited much sooner if Delegate Jones hadn’t repeatedly fought its passage.”

We’re not fooled either. The Virginia GOP has continually gone to great lengths “to prevent their own constituents from getting access to health care.” It took picking up 15 seats in the House of Delegates in 2017 to make them fear their political future enough to do the right thing on Medicaid expansion. But guess what? They’re still not doing the right thing on countless other issues. Health care was the #1 issue on voters’ minds going into 2017, the main issue Democrats campaigned on, and therefore the one issue the Republicans magically “came around” on. Want commonsense gun violence prevention reforms? Want climate change addressed? Want the ERA? Keep working and keep voting, and elect good people like Clint!