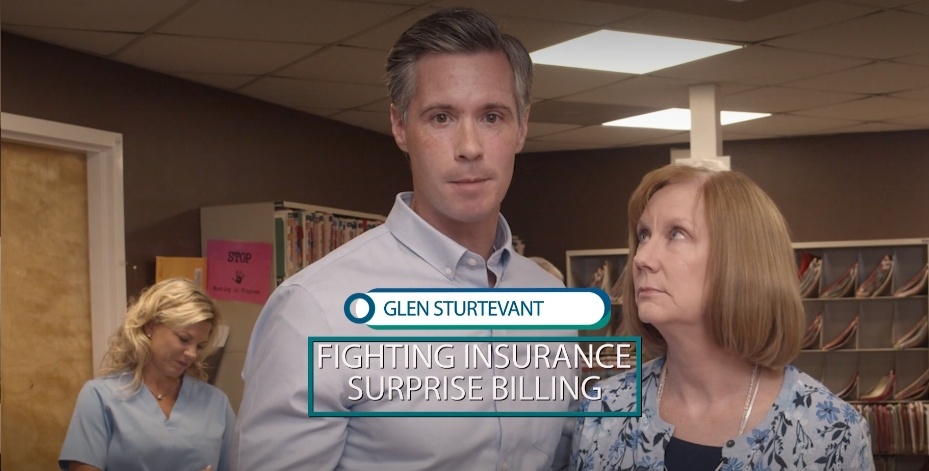 Over on his website, incumbent Republican Senator Glen Sturtevant – who, by the way, voted AGAINST Medicaid expansion – has a misleading, deceptive new campaign ad (click on the image at the right to view it) that trumpets his supposed health care bona fides by highlighting legislation he’s pursued in the Virginia Senate.

Of course, what’s really going on here is that Sturtevant is a seriously endangered Republican incumbent, currently (mis)representing a deep-blue district (went to Ralph Northam in 2017 by 15 points and to Tim Kaine, with 61% of the vote, this past November) that stretches across parts of Richmond, Chesterfield County, and Powhatan County. Sturtevant knows, of course, that the 10th State Senate district is ground zero in the fight for a Democratic majority in the Virginia Senate, with Democrats heavily targeting his seat, and with a super-strong Democratic opponent in Dr. Ghazala Hashmi, a career college and university educator with an inspirational immigrant success story of achievement and contribution to her community and country.

So yeah, this district should be a pickup for Democrats on November 5th, and Sturtevant is clearly panicky. Also note that Sturtevant won this seat in 2015 by only about 1,500 votes, against an uninspiring Democratic opponent in a lackluster year for Democratic turnout. This year, things are likely to be *very* different than in 2015. The bottom line is that, if 2019 turnout and enthusiasm on our side is strong, we can (and should) recapture this seat, which will puts Democrats in prime position to establish a majority in the State Senate.

What’s a panic-striken, endangered Republican incumbent in a blue district to do? First, Sturtevant resorted to a bit of racial demagoguery, but that doesn’t seem to have worked out very well for him so far.  Then, he has tried to pretend to be a moderate, which he certainly isn’t, on issues like the ERA and healthcare.

Which brings us back to Sturtevant’s ad, including the audacious claim that Sturtevant – who opposed Medicaid expansion for years (e.g., see 6:19 of this 2015 interview on right-wing talk radio, in which Sturtevant stated, “expanding Obamacare in Virginia is a non-starter”) – supposedly is now “fighting for our health care.” I know, I know – hahahahaha. Even more laughable, Sturtevant – who has demagogued on the evils of “Obamacare” for years – now claims that “health care shouldn’t be a partisan issue.” Yep, clearly this guy thinks that voters are idiots.

I mean, do I even need to point out the rich irony of Sturtevant lecturing voters that health care shouldn’t be a partisan issue, when he chose partisanship and right-wing ideology over people’s lives, both in his 2015 campaign and also by voting against Medicaid expansion in 2018? No thanks to Sturtevant, less than a year after Medicaid was expanded, nearly 315,000 Virginians have gained health care coverage. That number includes more than 11,000 people in Chesterfield County, almost 15,000 people in Richmond City, and almost 800 people in Powhatan County – all in Sturtevant’s district, and all of whom would NOT have had health care coverage if it had been up to Sturtevant! So much for health care not being a partisan issue for the faux-“moderate”, actual-right-wing-Republican Sturtevant.

Another audacious claim in Sturtevant’s ad comes when Sturtevant, standing beside his mother, Karen, looks into the camera with his best faux-sincerity, and says:

“My mom suffered a near heart attack. Then her insurance surprised her with a bill they refused to pay. I’m taking on the insurance companies to stop surprising billing.”

If you’re not familiar with the issue, “surprise billing” (also known as “balance billing”) is what happens when a person with health insurance unknowingly receives care from a health care provider who turns out not to be “in-network” with their insurer. The “surprise” comes when your insurance company refuses to pay its share of the bill, even though you thought you were covered, leaving you with sticker shock – on top of whatever medical problems you’re dealing with – when you receive an expensive bill for out-of-network treatment. Making matters even worse, these situations often arise during medical emergencies, a time when the *last* thing on the patient’s mind is to check carefully to see if they are receiving care from an in-network provider. They just need immediate attention. I’ve experienced this first-hand, in my own family, and it’s not at all pleasant, even if have the ability to pay. If you *don’t* have the ability to pay, of course it’s really *really* unpleasant. And completely unacceptable. Hence the need to fix the problem legislatively.

So Sturtevant does get a bit of credit, as this past General Assembly session he carried legislation to shield patients from receiving surprise bills stemming from medical emergencies. The bill, SB 1763, was written to prohibit health care providers from balance billing patients for out-of-network emergency services, to prevent insurance companies from denying a claim for a patient’s treatment during a medical emergency, and to require them to pay providers a fair amount when patients receive out-of-network emergency health services. The legislation had widespread support from doctors, hospitals, and advocates for patients and low-income Virginians. Almost everybody, in other words. It unanimously passed the Virginia Senate on a 40-0 vote, with every Democrat and Republican voting in favor of the bill. You know who didn’t support it? Big insurance companies. So guess what happened to the bill. That’s right; it died in the House of Delegates, controlled by Sturtevant’s Republican Party, after being parked in committee and ignored. Which kind of makes you wonder what games Republicans were playing here – appearing to support this legislation, giving Sturtevant something he could brag about in his blue district, but knowing full well that the Kirk Cox/Todd Gilbert-controlled House of Delegates would kill it?  That’s why I said a “bit” of credit, because on second thought, this whole thing seems like it might have been more of a cynical exercise by Republicans than anything.

But back to the issue itself: the bottom line is that, if you have health insurance that is funded by your employer and premium deductions from your paycheck, to say nothing of high deductibles and out-of-pocket costs, you should have a reasonable expectation that when you need emergency medical treatment, your insurer will pay for it. Yet, as we speak, big insurance is fighting against that tooth and nail. Congress has also taken an interest in the issue, as has Trump, and – shocked face – the bills and concepts they support favor big insurance companies. Are you starting to sense a theme here?

We have a small-scale version happening here in Virginia, where the State Corporation Commission (the most powerful state agency nobody’s ever heard of) is developing regulations to address certain types of balance billing. And who do you think the proposed regulations favor?  Need I even spell it out? You may have seen coverage of this issue here and here. Whatever comes out of that process, it won’t address balance billing arising from emergency medical care. SB 1763 attempted to do that, until big insurance lumbered in and crushed it. Remember, it’s big insurance that also negotiates what it will pay providers for health care services and defines how narrow a network will be, resulting in many providers being out-of-network with insured payments.

Despite the influence of big insurance, people can see through the bull****. Perhaps that’s why a recent Mason-Dixon poll, commissioned by the Virginia Hospital & Healthcare Association, found that a majority of Virginians (51 percent) believe insurance companies should be held financially responsible when a patient receives an unexpected medical bill related to emergency care provided by an out-of-network caregiver.

If the public innately understands this, why is it so difficult for policymakers to find a workable solution? The answer is predictable and simple: good old corporate greed. One insurer in Virginia controls almost 40 percent of the individual, small-group, and large-group health coverage market in Virginia. That insurer is Anthem, which collected almost $4.5 billion in health insurance premiums in 2018 from roughly 700,000 covered individuals. Nationwide, total health insurance premiums in 2017 approached $870 billion in 2017. So yeah, there’s a *lot* of money at stake in all this.

And it’s not just the companies and shareholders making a killing. An analysis of SEC filings found that:

“CEO Joseph Swedish, who stepped down in November, took home nearly all of that, while his replacement, Gail Boudreaux, took home just $166,000 given her start date late in the year. Her base salary moving forward is $1.4 million, plus $10.3 million in long-term incentive awards for 2018.”

As we continue to discuss health care access and affordability in our politics and public life, we should start with a rational, fact-based conversation about the factors driving up costs. One of the big ones is the health insurance monopolies. U.S. Senator Elizabeth Warren (D) belief that Medicare for All has a chance at being passed into law in the near term could be wishful thinking, but she was dead on when she said these two things during last week’s debate:

Food for thought. In the meantime, make sure that if you live in SD10, you vote on November 5 – for Democrat Ghazala Hashmi, who unlike Republican Glen Sturtevant, will not put partisan politics before people’s lives.