by John Seymour, a  40-year resident of Arlington 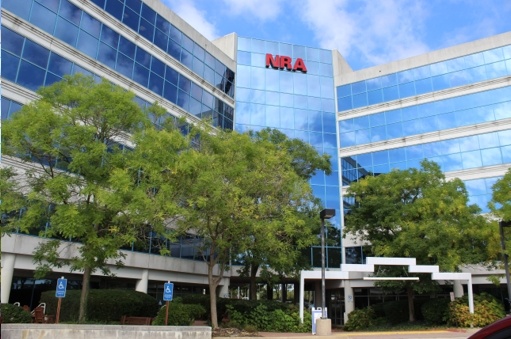 A few minutes drive from Arlington’s border, just off Route 66, lies the headquarters of the National Rifle Association — the country’s most powerful gun rights advocacy and lobbying organization. The headquarters building itself is a conventional glass and precast concrete structure in Fairfax County. Except for the bold red NRA logo and the large Blue Lives Matter flags at its entrance, it is indistinguishable from a thousand other office buildings orbiting the nation’s capital.

Within it, however, is an internationally recognized museum — the Firearms Museum — displaying a collection of more than 1,500 rare and historic weapons. Although my family and I have visited — during our 40 years or so in Arlington — nearly all of the regional museums, galleries, and historic homes— I had never, until last week — visited the Firearms Museum. As I entered, I saw that the museum was similar, in one respect, to the Smithsonian museums. It was free. And had at least one major difference. It does not use bag checks or metal detectors. The armed security staff presumably provide the only protection visitors need against “bad guys with guns.” (The NRA may be re-thinking that policy, however, in the aftermath of a staff member’s accidental shooting of himself at the Headquarters a couple years ago).

Given the political militancy of the NRA leadership and its combative public demeanor, I had expected the Museum to strike a similarly besieged and fiery tone. But its entrance is formal and reserved, decorated only with artfully edited language from the Second Amendment (“the right of the people to keep and bear arms shall not be infringed,” but omitting the Framer’s narrow intent to preserve a “well-regulated Militia”).

Visitors enter the Museum into the Petersen Collection, a room venerating the principal benefactor of the Firearms Museum — Robert E. Petersen —a magazine publisher who donated much of the Museum’s collection. The room is softly lighted and deeply carpeted, with mahogany paneling and large brown leather couches. It could be a library at Hillwood Estate or Dumbarton Oaks. The weapons (rare shotguns and sporting rifles) are displayed in ranks, with stocks handsomely carved and metalworks lovingly engraved, in polished cases — spotlighted like Faberge eggs.

To a non-collector, the guns — although rare and valuable — tend to blend together pretty quickly. The bulk of the Museum, however, purports to tell the Nation’s story through a series of galleries, arranged chronologically and labelled variously as The Road to American Liberty, The Prospering New Republic, and Ever Vigilant. The exhibits, minimally explained, are intended to show how firearms were used during our nation’s history to secure American’s freedom and independence and how they have been used ever since to protect and maintain that freedom. A series of dioramas depict important time periods in history, from a stockade fort at Jamestown, to a trench on the Western Front in World War I, to a shelled out town in Normandy in World War II. The focus is on the weapons as totems and tools of liberation and the message is plain. Guns are essential to liberty. We limit them at our peril.

The Tenacity of Truth:  Despite the endlessly repeated equation of guns with liberty, history inexorably exerts its pull.  One weapon of particular interest to our docent was a ceremonial Colt pistol, manufactured for President John Kennedy and decorated with the Presidential seal and the serial number PT-109, the number of Kennedy’s PT Boat.  According to the curator’s notes, however, “the President’s untimely death in November 1963 prevented this handgun from being presented.”  To me — and I would expect to other visitors interested more in history than in guns as artifacts— the Colt pistol seemed dangerously evocative of a weapon not mentioned in the Museum at all— the Italian bolt-action rifle purchased by Lee Harvey Oswald for $19.95 in response to an advertisement in The American Rifleman, the official publication of the NRA.  On November 22,1963, Oswald used the weapon to assassinate President Kennedy.

The museum also displays, in yet another instance of astonishing lack of self-awareness and historical tone-deafness, yet another ceremonial Colt pistol, this one given to President Abraham Lincoln by his Cabinet.  The Museum references only in passing the derringer used by John Wilkes Booth to assassinate President Lincoln, a weapon now displayed in the Ford’s Theater National Historic Site administered by the National Public Service.  That one weapon, together with the blood-stained pillow from Lincoln’s death bed, tell us more about the complicated relationship between guns and liberty in our nation than all the weapons displayed in the NRA Museum.

“The Lost Cause.”  Other exhibits display a similar myopia and ideological leaning in their treatment of American history.  The Museum contains references, in its gallery labelled “A Nation Asunder,” to the “War Between the States” — an aging Southern euphemism for the Civil War — and highlights South Carolina’s protestation that the war was righteous because states need to defend the “powers granted to it by the Tenth Amendment of the Constitution” to secure “a free and sovereign government.”  The South’s peculiar institution of slavery goes unmentioned.  A prominent photograph of Confederacy President Jefferson Davis, as the Colonel then commanding the 1st Mississippi Volunteers, might strike a particularly jarring note for many local visitors.  Arlington only recently succeeded, after years of opposition by Republican majorities in Richmond, to remove Jefferson Davis’s name from one of the county’s major highways. 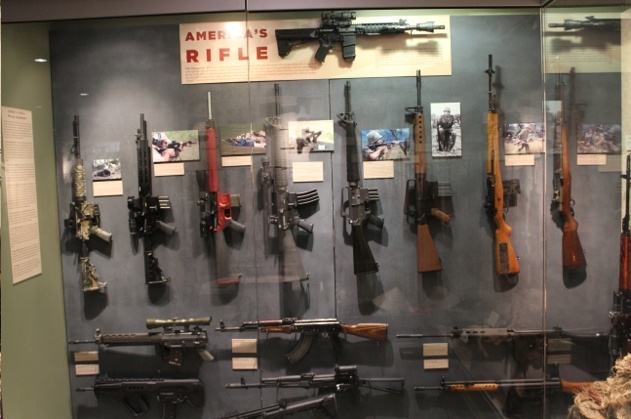 “America’s Rifle.”  A massive display holding various models of modern assault rifles— “America’s Rifle”— as captioned by the curators, seems particularly graceless in light of the weapon’s frequent use in mass shootings today.   The ranks of assault weapons exert a powerful effect on the viewer and reinforce the Museum’s depiction of their owners are the true descendants of the Founding Fathers, modern Minutemen.  Other museum visitors, of course, might view them differently,  Following the use of an AR-15 rifle in the Port Arthur, Tasmania massacre — the worst single-person mass murder in Australian history — Australia enacted strict laws restricting the private ownership of semi-automatic rifles.  As a result of the Christchurch mosque shootings during Friday Prayer on March 15, 2019, the New Zealand government banned semi-automatic rifles entirely.  More recently, New Zealand proposed a number of additional gun control measures, including a registry of all guns in the country.  The NRA’s Museum however, proudly proclaims the weapon to be the “most popular rifle pattern in America” and the organization continues to oppose all state and federal legislation seeking to curb its use. 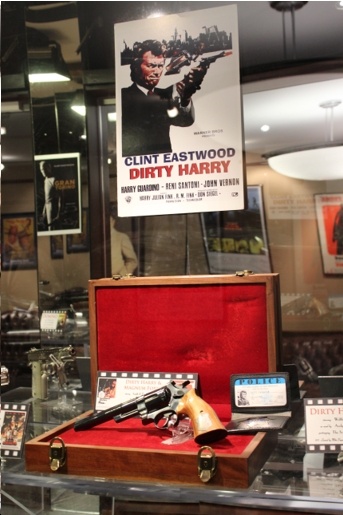 “You’ve got to ask yourself one question: ‘Do I feel lucky?”  Well do you, punk.?”  The most popular gallery in the Museum, according to our guide, is captioned “Hollywood Guns” and features weapons used in television and movies over the years.   During my visit, the docent commented that the Smith and Wesson .44 caliber police revolver used by Clint Eastwood in the film “Dirty Harry” (“Go ahead, make my day”) was the most frequently photographed item in the entire collection.

Consistent with the NRA’s world view, that film too had impeccable conservative credentials.  Its narrative is rife with criticisms of the liberal municipal politics of San Francisco, where progressive criminal justice policies purportedly explained the urban crises then facing America’s cities.  The message told by that and other films accentuated in the exhibit is that weapons are essential to secure individual agency where institutions fail — when the social contract is torn and only weapons can make the playing field equal.  Guns permit their users to defy the type of politics they despise, another theme that resonates forcefully with gun rights and militia groups today.

The ahistorical treatment of America’s wars, the lauding of guns as exemplars of freedom, and the enshrining of guns into popular mass culture myths of manhood and rugged individualism were grating and, after a bit, wearisome.  But they were hardly surprising.   Given the NRA’s philosophy and mission, a gun skeptic should expect nothing less in its firearms museum.  Particularly when compared to NRATV’s (recently shuttered in the face of growing public revulsion) endless propagation of dystopia intimations of approaching race wars, rampant urban violence, anti-Muslim and immigrant animus, and general fear-mongering, the gun and freedom message repeated ceaselessly in the museum began to seem almost innocently naive and rather quaint.

“A Child’s Room.”  But then I came to a gallery named “For the Fun of It.”  It contained such exhibits as the original Coney Island shooting gallery and displays of guns used by popular exhibition marksmen. It also contains a diorama labelled “A Child’s Room” — a lovingly curated exhibit of a young boy’s bedroom circa 1952. Within a softly lit, intimate, and sepia-toned bedroom decorated with cowboy-themed flooring, wall paper and bedspread, were scattered toys of my generation —  a slinky, a record player with 45s, paint-by-numbers sets, a Viewmaster and slides, a couple of Hardy Boy books, Davey Crockett’s coonskin cap. But the bedroom is also littered with a dozen or more weapons, from shotguns, to single shot rifles, to air rifles, and cap guns.  They are everywhere — on the bed, on the wall, on the floor, on the coat rack.  It is intended, one supposes, to be a universal and sentimental All-American theme — a nostalgic look at a simpler time and place, when gun play was just that — play, and a rite of passage for boys. 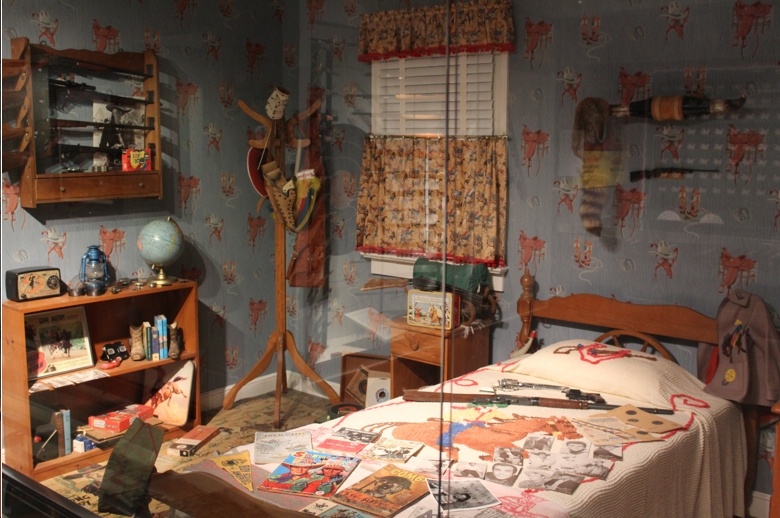 But children and guns are not so easily paired now, if they ever were.  Not in the wake of Sandy Hook Elementary School in Newtown, Connecticut where, using “America’s Rifle,” a young disturbed assailant with “ready access to guns” murdered 26 people including 20 children between 6 and 7 years of age.   After Sandy Hook, “A Child’s Room with Guns” might more reasonably be the bathroom in Lauren Rousseau’s first grade classroom where 15 7 and 8 year old children, hiding and huddling from a mass murderer, were slaughtered.  Or it might be the library at Columbine, where 10 students were shot dead.  Or it might be the coatroom in my grandson’s second grade classroom in Arlington, where students shelter during the quarterly active shooter drills now required under Virginia law.

After Newtown, and Parkland, and Columbine, and [fill in the name of the tomorrow’s mass shooting] the diorama cannot be characterized as merely tasteless and tone-deaf and willfully blind— it’s grotesque and shameless.   Like a tableau of lost innocence displayed in an abattoir.  It further’s the NRA’s central myth — that the answer to gun violence is more guns.   It also reveals the NRA’s central strategy for achieving universal gun ownership — reiterated and dramatized throughout the Museum.   It is to normalize and promote gun ownership through a toxic and counterfactual combination of fear-mongering, sentimentality, and manipulation of history.