[UPDATED 10/8/19 – See below for an announcement by another Democratic candidate, Claire Russo.]

I’m really trying to stay focused on the 2019 Virginia General Assembly elections coming up on November 5, but for better or worse, Democratic candidates are already gearing up for 2020…and to an extent even 2021. See below, for instance, for the latest announcement in VA-05, the seat currently held by freshman Rep. Denver “Bigfoot” Riggleman (R), by Dr. Cameron Webb (D). Also see the April 2 announcement from Democrat RD Huffstetler (from April 2) and a March 22 tweet about Democrat Kim Daugherty announcing her exploratory committee.

Note that the 5th CD is a pretty “red” place, with Ed Gillespie beating Ralph Northam there by 9 points (54%-45%) and with Corey Stewart beating Tim Kaine by 2 points (50%-48%). Which means that these three Democratic candidates will have their work cut out for them. On the other hand, there appears to be unhappiness with Rep. Riggleman, who himself is hard right in many ways, from the even harder right. See, for instance, the Cumberland County GOP going after Riggleman for (supposedly) “not being tougher on immigration” and for officiating at a same-sex marriage. It will be interesting to see how broad this sentiment is, and specifically whether Riggleman draws a primary challenge from the far right. Stay tuned. Now, back to focusing on November 5, 2019 and taking back the Virginia State Senate (currently 21-19 Republican) and House of Delegates (currently 51-49 Republican)!

“The people have spoken and ensuring access to affordable, quality healthcare should be Washington’s top priority,” said Cameron. “But instead, too many politicians are spending more time trying to prove each other wrong than trying to help the people they have been elected to serve.

“That constant putting politics over patients—that’s what’s wrong. I’m ready to go to Washington to be a leading voice on behalf of patients and actually get something done. As a doctor, I’ve seen firsthand how inadequate health care hurts families. I’ve seen how health is shaped in spaces well beyond the exam room through issues like employment, education, and even the environment. I’m running because it is urgent that we prioritize taking common sense steps to improve the health and well-being of all Americans.”

In the coming weeks Cameron will be traveling the district meeting voters and getting to know more about the challenges families are facing and what he can do to help.

“As any scientist will tell you, before you can solve a problem you have to start with collecting data. I look forward to visiting with folks all over the district to hear from them what’s working and—more importantly—what isn’t in their lives,” said Cameron.

Cameron grew up in Spotsylvania, Virginia along with his five siblings. His mother, a public-school speech therapist, and father, an HR manager with the DEA, taught Cameron to take an active role in his community and serve others — lessons that Cameron carries with him today.

After graduating from UVA and getting his medical and law degrees, Cameron was tapped by President Obama for the White House Fellowship. In his time in the Obama administration, he was the only medical doctor on the White House Health Care Team and also worked on President Obama’s My Brother’s Keeper Initiative, where he helped tackle issues in education, workforce development, and criminal justice reform.

A practicing physician, Cameron returned to Charlottesville where he treats patients as a general internist, teaches undergraduate and graduate students and serves as the Director of Health Policy and Equity at UVA’s School of Medicine. His wife, Dr. Leigh-Ann Webb, is an ER doctor who grew up in Appomattox County. They reside in Albemarle County where they raise their two children, Avery and Lennox.

“I’m running for Congress because the problems facing our country require a new generation of leadership. Partisan-bickering and special-interest politics have no place in government. We all want the same thing: a chance to provide our children with a better life than our own. This campaign is about everyone, which is why I’ll fight for every family in the 5th District to have a place in a more prosperous, inclusive future.”

The son of parents who struggled with addiction, Roger Dean was the first in his family to graduate from college and used the HOPE Scholarship to graduate from the University of West Georgia. After college, Roger Dean enlisted in the Marine Corps, serving his country in both Iraq and Afghanistan.

After using the GI Bill to graduate from the Harvard Business School, Roger Dean went on to work for a high-growth startup and later on co-founded his own technology startup.

Roger Dean lives in Charlottesville with his wife Emily, who works as an OB-GYN at Martha Jefferson Hospital, and his daughter, Alice Sue. 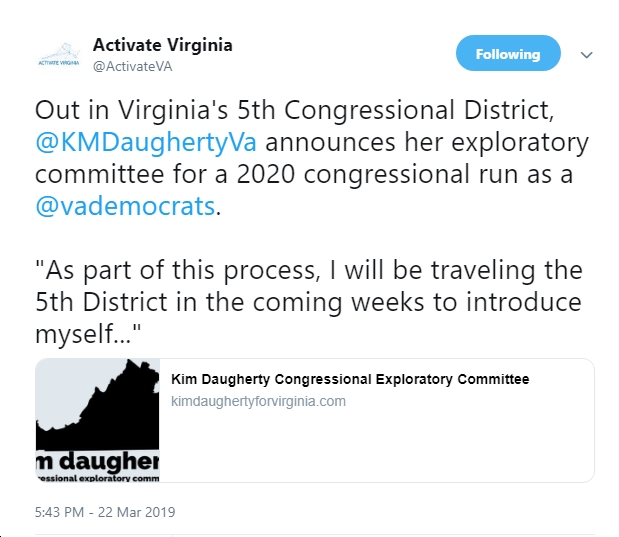 Earlysville, VA – Today, Marine Corps veteran Claire Russo announced her campaign to represent Virginia’s 5th Congressional District. Russo, a Democrat, is running against Congressman Denver Riggleman because she believes Virginians deserve a representative who will push aside partisan politics and work to get results for her community.

“I’m running for Congress because I believe there are far too many political games being played in Washington and far too few people standing up for families like ours,” said Russo. “As a Marine, my focus was getting the job done and I’ll bring that same focus to represent our community. That means ensuring quality affordable health care, protecting retirement for seniors, and working to make sure our kids have the same opportunities that we did.”

Claire Russo joined the Marines Corps at 23 and served as an Intelligence Officer serving in the First Marine Expeditionary Force and the First Marine Air Wing. She deployed to Fallujah, Iraq where she led a team of Marines targeting insurgent networks.

Following her sexual assault by a Marine aviator in 2004, Claire took on the military bureaucracy to make sure her attacker was prosecuted and jailed. Since then, Claire has been an advocate for women’s equality in the military.

Claire continued her service after the Marines, working as a civilian with the Army. In this capacity, she deployed to Afghanistan and served as a counter insurgency adviser to the infantry. Following her work with the Army, Claire served on General Petraeus’s counter insurgency advisory team where she evaluated the training and employment of female engagement teams and their support of special operations forces in Afghanistan.

After returning home, Claire worked as a Council on Foreign Relations International Affairs fellow studying the role of women in combat and conflicts.

In various capacities, Claire Russo has dedicated her life to serving her country and her community. Raised in Virginia, Claire resides in Earlysville with her three children, Genevieve, Adelle, and Orion. Claire’s husband Josh is an Army Special Forces Officer currently deployed overseas.