In the latest example of Republican intolerance and extremism, see below for a screenshot of the Cumberland County Republican Committee’s Facebook post, in which they write that they “unanimously passed a motion of no confidence in Congressman Denver Riggleman for not being tougher of [sic] border security and immigration measures, as well as his recent act to officiate the marriage of a homosexual couple.” Note that Riggleman has voted with President Trump 92.9% of the time, so he’s not exactly a liberal. On immigration, by the way, Riggleman supports “an ‘all-of-the-above’ strategy to securing our border,” including “reallocat[ing] funds cut from a wasteful Pentagon budget to our Southern Border and U.S. ports” and “build[ing] physical and technological barriers, including a wall where it is conducive.” So again, he’s not exactly a liberal, but apparently he’s not right-wing enough for the Cumberland County GOP. 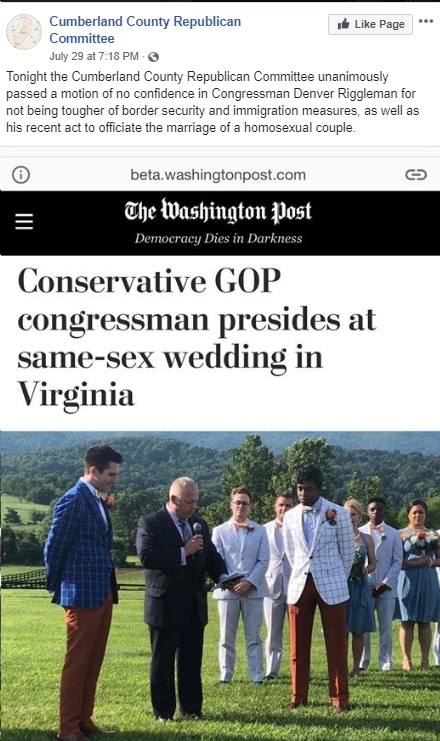 Video: Spotsylvania School Board Republicans “are literally urging the burning of books in school libraries”; One Declares, “I don’t want them in our schools...