Mount Vernon, Va — Senator Scott Surovell (D-Fairfax) and Delegate Patrick Hope (D-Arlington) introduced legislation to prohibit any healthcare provider licensed by a regulatory board of the Department of Health Professions (DPOR) from engaging in conversion therapy involving minor children. Religious leaders who are not registered healthcare providers and adult patients would not be affected.

The legislation codifies existing regulation which protects minors from providers who claim to be able to change a person’s sexual identity or orientation. There is no evidence that shows conversion therapy works. Any conversion therapy efforts with a person under 18 years old would constitute unprofessional conduct and grounds for disciplinary action by the appropriate health regulatory board within the Department of Health Professions.

Surovell and Hope both worked on this issue in past legislative sessions and successfully lobbied DPOR to regulate the practice last year. He was optimistic about the bill’s prospects this year. “Not only is this practice harmful to our youth developing their gender identity, but from a legal standpoint, conversion therapy is abusive given the mental health repercussions and has been associated with increased suicide risk. It is a fraudulent practice, found to be malpractice in some states, and this will protect our children from beliefs rooted in bigotry,” Surovell said. “The General Assembly has a duty to permanently protect children from being targeted and hurt by these dangerous discredited practices.  Failure to codify this could result in a reversal of these regulations by a future administration.”

Hope carried the bill in the House of Delegates in past sessions. “So-called “conversion therapy” is not only ineffective it is a harmful and dangerous practice, especially when targeted at our children. It’s based on the evil notion that being a homosexual is a sin or a disease that needs treatment. It’s past time Virginia joined the medical professional societies of the world and outright banned this backwards practice. Virginia is a place of acceptance and inclusion and the General Assembly will take whatever steps necessary to protect our children from this destructive practice,” Hope said.

Equality Virginia Executive Director Vee Lamneck expressed support for the legislation. “Conversion therapy is a dangerous practice based on the false claim that being LGBTQ is mental illness. There is no evidence to support this nor does it hold any scientific merit,” Lamneck said. “Virginia would be taking a positive step into the new decade by prohibiting this practice that only harms our youth for being who they are.” 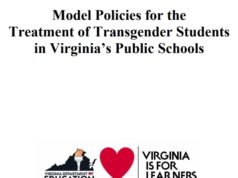 “FCPS Pride” Responds to Anti-Trans Lawsuit by The Family Foundation of Virginia Over VDOE’s Newly Approved “Model Policies for the Treatment of Transgender Students...