On 12/30, Sports Illustrated posted “Five Sports Business Predictions for the 2020s,” which predicts that “College athletes will obtain [names, images and likenesses – NIL] rights and the NCAA will eventually accept that.” Currently, as the article explains, “NCAA amateurism rules disallow college athletes from hiring agents or licensing their NIL to video game publishers, camps, trading card shows, clothing makers, sneaker companies, technology providers and other businesses.” But this situation could change, with California (see below) and “two dozen other states…in various stages of considering NIL legislation” – although note that the “NCAA is poised to strike back,” by filing “lawsuits against states that adopt NIL laws.”

As noted above, California has already passed an NIL law. This past September 30, California Gov. Gavin Newsom signed SB206 – which passed the legislature unanimously. The bill would:

The bill would take effect on January 1, 2023, giving the NCAA time to respond. Of course, if a handful of big college sports states pass similar legislation, the NCAA would probably be forced to reach some sort of compromise, instead of digging in its heels.

By the way, the push for this type of legislation isn’t just happening at the state level. As this article points out, “H.R. 1804, the “Student-Athlete Equity Act,” (SAEA) seeks to change the NCAA’s position on student-athletes’ rights of publicity...seeks to push the NCAA in the direction of allowing more student-athlete compensation by threatening its tax status.” But, the article explains, SAEA “does not purport to directly require the NCAA or its member institutions to allow students to sell their publicity rights without fear of losing their eligibility, as would the ‘Fair Pay to Play’ bill that seems likely to pass the California legislature.”

Also at the federal level, in early December 2019, Senators Chris Murphy (D-CT) and Mitt Romney (R-UT) launched “a working group in the United States Senate devoted to the topic of college athlete compensation.” Sen. Murphy’s statement explained (bolding added by me for emphasis):

“College athletes are being used as commodities to make money for the NCAA, colleges and corporations, while not being compensated for the work they do, nor given the appropriate health care and academic opportunities they deserve…That’s plain wrong. The majority of executives and coaches who are getting rich off college athletics are white, while the majority of players at the big time sports programs are black. This is a civil rights issue and I’m glad to launch this bipartisan working group to fix the inequities in this broken system.”

And note that U.S. Sen. and presidential candidate Cory Booker has called for “allow[ing]college athletes to be compensated for their ‘name, image, and likeness’ rights. As Sen. Booker points out, “current NCAA rules dictate that NCAA athletes cannot benefit from sponsorships or receive payment for the use of their name, image, or likeness (NIL) rights, or hire an agent or business manager.”

Now, Del. Marcus Simon (D) has introduced a very similar bill (HB300) here in Virginia, with “a delayed effective date of July 1, 2024,” which – among other things – blocks colleges and universities from “prohibiting or preventing a student-athlete from earning from another individual or entity compensation that results from the use of the student’s name, image, or likeness, except in certain limited circumstances.” Check it out. 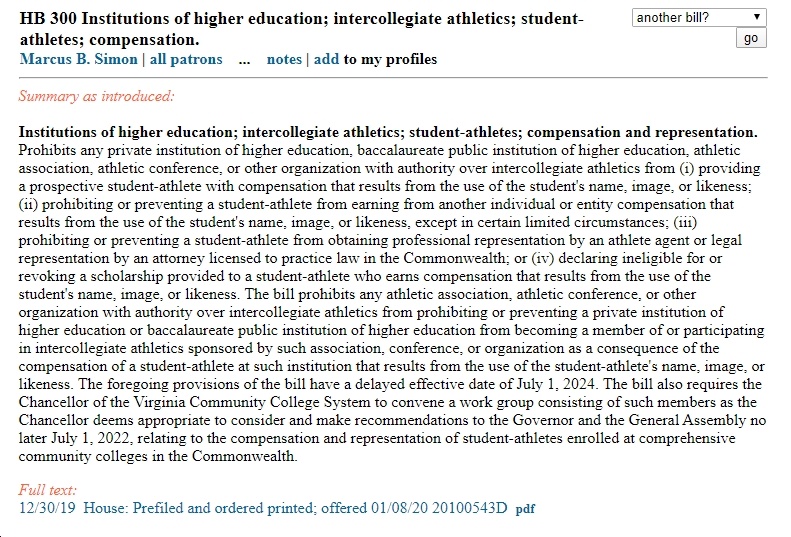 Again, what these bills – in many states and at the federal level – appear to be trying to do is to pressure the NCAA to change its policy on what it euphemistically refers to as “student-athletes.” Why is this necessary? The Washington Post’s Sally Jenkins explained it well back in late October (bolding added by me for emphasis):

All of which is why it’s good to see states and Congress stepping up on this issue.

Rep. Don Beyer: “I am proud of [those]…who courageously came forward to speak out about the toxic culture Snyder created. Good riddance.”