With the mid-year 2020 Virginia campaign finance numbers now available, including for Virginia House of Delegates members, there’s a bunch of interesting stuff that jumps out. That includes how pathetically little “cash-on-hand” House Republicans have, and how many opportunities this potentially opens up for House Democrats heading into 2021, when every House of Delegates seat will be up for election, and when Democrats will be defending (and hoping to increase) their 55-45 majority. We can group the Republicans by how competitive their districts are and by how much (or, more to the point, how LITTLE) money they have at the midpoint of 2020.

First, if we look at some of the House Republicans who won by the narrowest margins in 2019, we get a pretty good start at a potential “red-to-blue” list for 2021…

Other Republican House of Delegates members won by at least 14 percentage points in 2019, so are not vulnerable or in a “red-to-blue” category. Normally, that should mean that they’d be counted on to help out some of their more-vulnerable House Republicans colleagues. How’s that looking?

Let’s start with the following 11 Republican members who have “cash-on-hand” of less than $6,000, which means they barely have enough money to keep the lights on, let alone help out their colleagues…

Then there are these six House Republicans who have less than $20K “cash-on-hand,” meaning they can afford gas and food and not much else

The following six House Republicans can be considered as “underperforming” – perhaps they can contribute a few thousand dollars to their House Republican colleagues, beyond paying their own expenses, but certainly aren’t in a position to help much.

The following four House Republicans are in reasonable shape financially for their own campaigns and can contribute a little bit to their caucus mates.

The following six House Republicans are in good shape financially, with enough to campaign themselves and donate to other members – but certainly not huge amounts of money by any means.

In sum, House Republicans are getting their butts kicked by House Democrats in terms of fundraising (see below for more information on this). Why is this the case? Clearly, a huge part of it is that Virginia Republicans are almost completely out of power at this point, having not won a statewide office since 2009, and in 2019 having lost control of both the State Senate and House of Delegates. The fact is, a *lot* of House Republicans’ money in previous years came to them, basically without even asking, from corporate interests who hoped for favorable treatment from the party in power – the Republicans for many years. Now, those House Republicans are out of power, with no clear prospect of getting it back, so why would corporate interests want to give them money? And, from what I hear, House Republicans aren’t very good at raising money, either via grassroots fundraising or by calling up corporate donors. Which basically leaves them high and dry.

While all this is bad news for House Republicans, obviously, on the flip side, it opens up a lot of opportunity for House Democrats to hold and even expand their House of Delegates majority in 2021 – a gubernatorial year, by the way, meaning that Democrats will likely show up to vote in large numbers. Which means that House Democrats should be looking right now to recruit strong candidates for 2021 in all the competitive districts, while of course locking down all their incumbents… 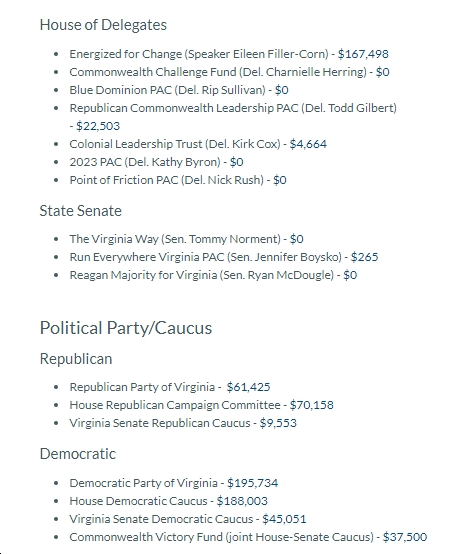