Hahahahaha. Couldn’t happen to a better guy, eh? You know the rabidly xenophobic guy who once called immigrant families “rats”  – Virginia’s former Attorney General Ken Cuccinelli? Now, the question is, who gets him the hell OUT OF THERE?

Upon Secretary Kirstjen Nielsen’s resignation on April 10, 2019, the official who assumed the title of Acting Secretary had not been designated in the order of succession to serve upon the Secretary’s resignation. Because the incorrect official assumed the title of Acting Secretary at that time, subsequent amendments to the order of succession made by that official were invalid and officials who assumed their positions under such amendments, including Chad Wolf and Kenneth Cuccinelli, were named by reference to an invalid order of succession. We have not reviewed the legality of other actions taken by these officials; we are referring the matter to the Inspector General of DHS for review.” 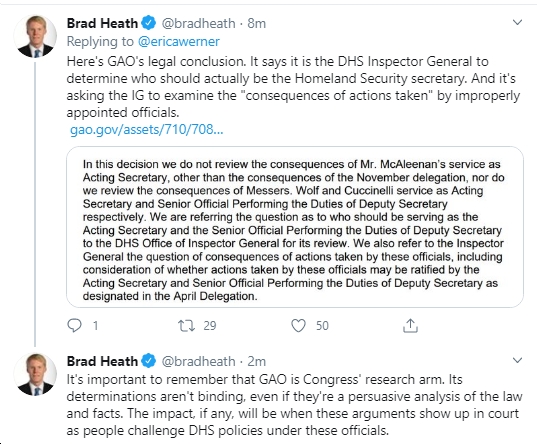 Jason Miyares Silent as His Endorser and Ally, Ken Cuccinelli, Doubles Down on Anti-LGBTQ Positions in Washington Times Article