If there was any doubt about who and what Glenn Youngkin are – and that it’s completely laughable to call him a “moderate” in any way/shape/form – check out the speech he delivered yesterday evening at UVA, some “highlights” of the speech, as well as a few reactions. But first, note who Youngkin was speaking to – THIS group.

For two decades, [Leonard] Leo has been on a mission to turn back the clock to a time before the U.S. Supreme Court routinely expanded the government’s authority and endorsed new rights such as abortion and same-sex marriage. Now, as President Trump’s unofficial judicial adviser, he told the audience at the closed-door event in February that they had to mobilize in “very unprecedented ways” to help finish the job.

[Leo] is widely known as a confidant to Trump and as executive vice president of the Federalist Society, an influential nonprofit organization for conservative and libertarian lawyers that has close ties to Supreme Court justices. But behind the scenes, Leo is the maestro of a network of interlocking nonprofits working on media campaigns and other initiatives to sway lawmakers by generating public support for conservative judges.

The story of Leo’s rise offers an inside look into the modern machinery of political persuasion. It shows how undisclosed interests outside of government are harnessing the nation’s nonprofit system to influence judicial appointments that will shape the nation for decades.

So that’s the group – the Federalist Society (“an operation funded by dark money and designed to remake our judiciary on behalf of a distinct group of very wealthy anonymous funders…nearly 90% of Trump’s appellate judges, and both his Supreme Court justices, are members of the so-called Federalist Society. On the Supreme Court, Kavanaugh, Gorsuch, Alito, Thomas? – all are members“) – that Youngkin was speaking to at UVA yesterday evening. As for what Youngkin had to say, and some reactions, see below the video.

Now obviously, this is all complete nonsense. And, as usual, Youngkin is full of it, not to mention tissue-paper-thin intellectually speaking.  With that, here are a few reactions, including:

P.S. Also worth noting is that the audience was asked to wear masks, and many/most refused and someone loudly booed.  And Youngkin, of course, showed up with no mask, even though that is UVA policy. 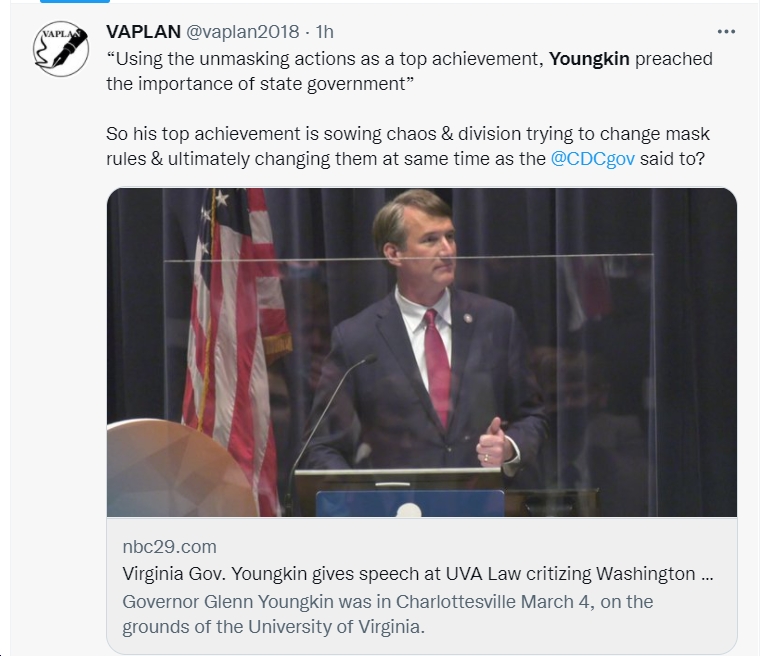 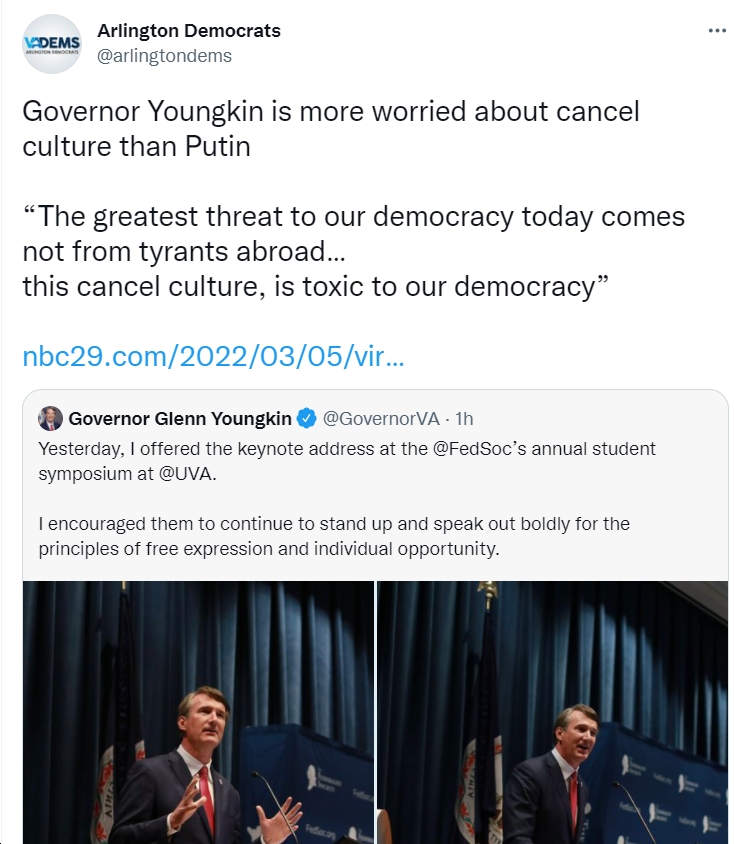 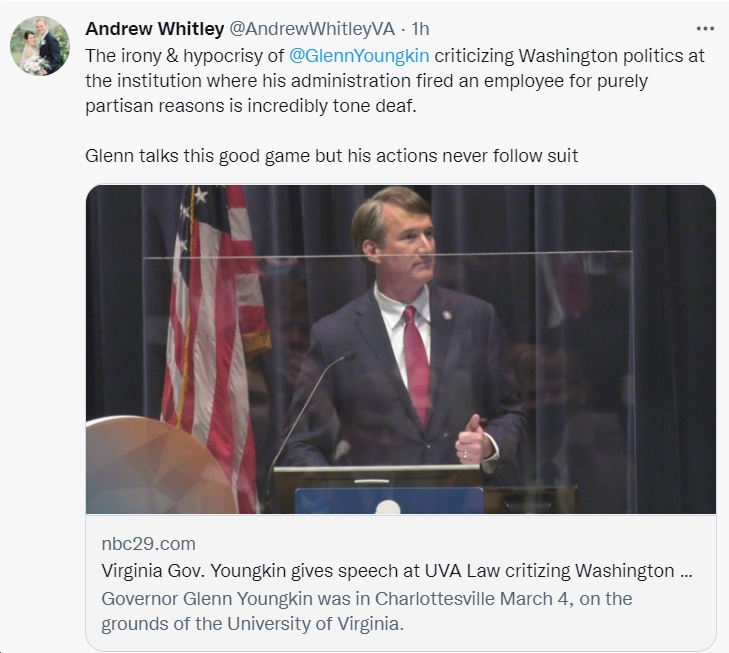 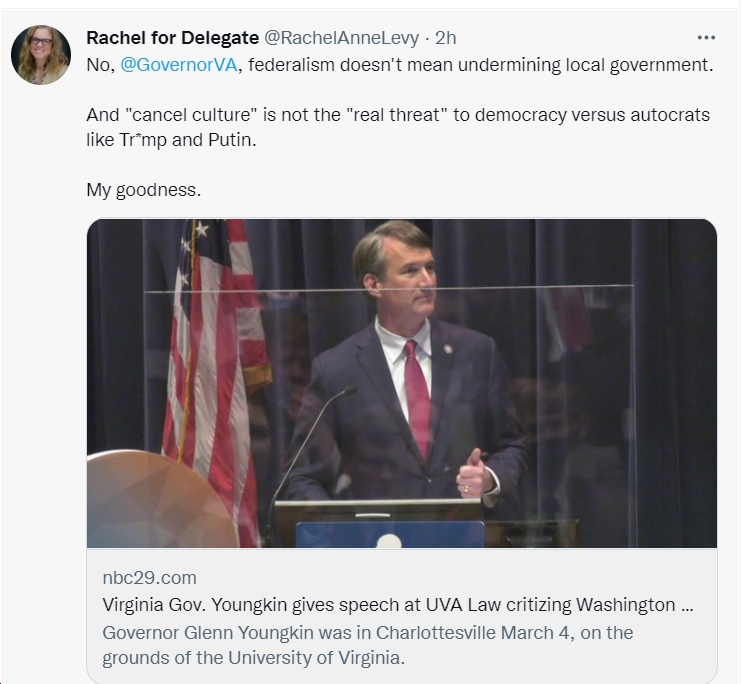 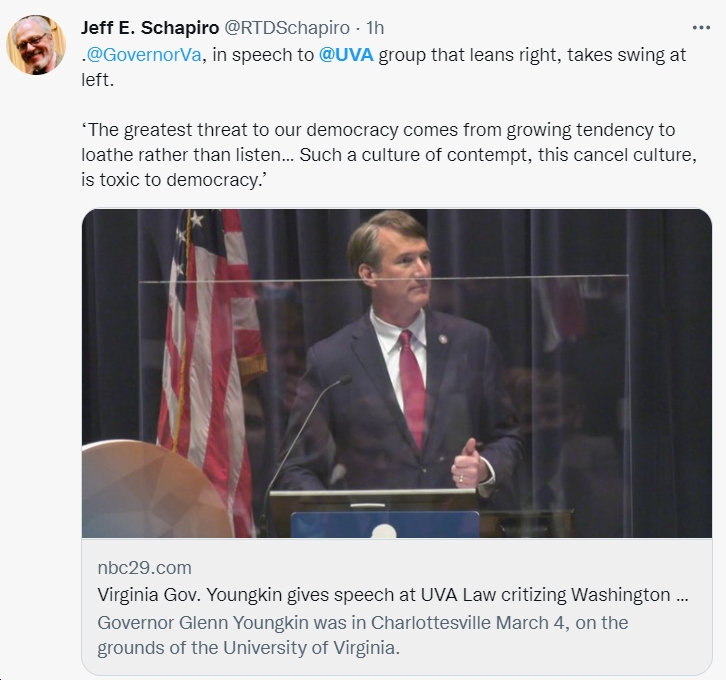