Spanberger Statement on Being Sanctioned by the Russian Federation

WASHINGTON, D.C. — U.S. Representative Abigail Spanberger — a Member of the U.S. House Foreign Affairs Committee — today released the following statement after the Russian Foreign Ministry announced that she and several Members of Congress are now officially sanctioned by the order of the State Duma of the Federal Assembly of the Russian Federation.

“I’ll consider it a badge of honor to have been sanctioned by an authoritarian leader who has waged a horrific war against a sovereign nation and its civilians. This is a time for taking sides, defending democracy, and supporting our allies, and today’s announcement by a regime committing war crimes is confirmation that Putin and his enablers know exactly what side I’m on.

“As a result of the global pressure campaign of crushing sanctions and military and humanitarian support led by the United States and our partners, Russia and Putin are more isolated each day. As evidence of Russia’s war crimes and genocide in Ukraine mounts, the United States must stand firm and united in our support of the Ukrainian government, the Ukrainian people, and our shared ideals of democracy and sovereignty.

“Ukraine will win this war, just as it did the Battle of Kyiv. I will keep working in Congress to make sure our nation is providing Ukraine with the military, humanitarian, and intelligence support they need to beat back the Russian assault and ultimately triumph.”

Since Russia’s invasion of Ukraine, Spanberger has focused on holding Russian government officials and Putin’s inner circle accountable for the war in Ukraine.

In the hours following Putin’s invasion, Spanberger helped introduce the bipartisan CORRUPT Act to hold Putin’s enablers accountable for supporting his military aggression and human rights abuses. Specifically, it requires the administration to consider sanctions against 35 of the most corrupt and abusive Russian officials.

Additionally, she helped introduce bipartisan legislation that would instate a comprehensive travel ban on Russian government officials — including Duma members — and members of the Russian oligarchy. The banned representatives of Russian leadership would include all government officials, all oligarchs, any employee of a state-owned Russian company, and any employee of a company that receives state funding from the Russian Federation.

Additionally, Spanberger cosponsored the bipartisan Asset Seizure for Ukraine Reconstruction Act. This bipartisan bill would give the President one-time emergency authority to not just sanction Putin-connected oligarchs, but to seize and liquidate certain high-value assets for the benefit of Ukraine — in recognition that these assets function in practice as state-owned assets. 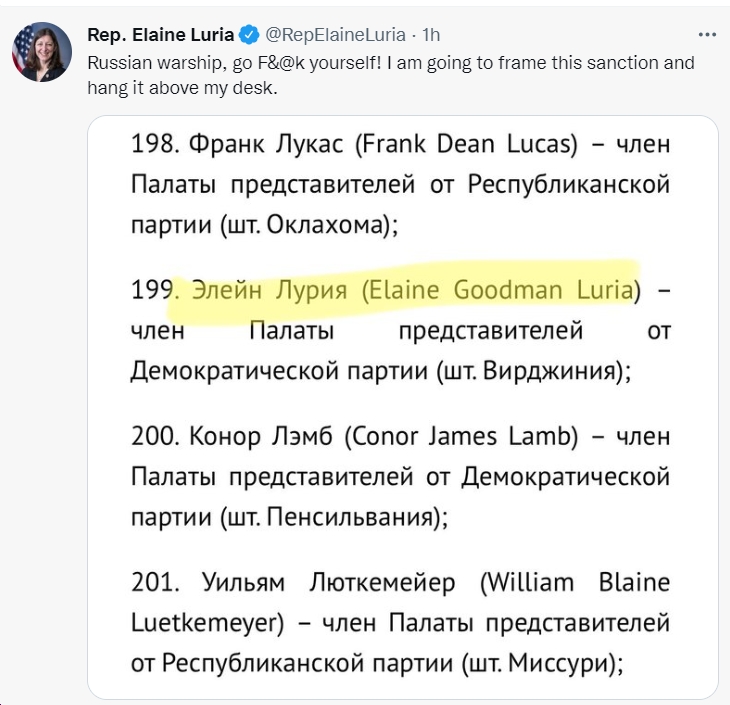