This afternoon, the U.S. House of Representatives overwhelmingly (362-63) passed a resolution, co-sponsored by Rep. Gerry Connolly (D-VA11) and Rep. Mike Turner (R-OH10), “in support of the establishment of a Center for Democratic Resilience within NATO to help member, partner, and aspirant states strengthen their democratic institutions and to preserve democracy around the globe.” The resolution also states that the U.S. House “reaffirms its unequivocal support for the North Atlantic Treaty Organization as an alliance founded on democratic principles” and “calls on the President to use the voice and vote of the United States to adopt a new Strategic Concept for NATO that is clear about its support for shared democratic values and committed to enhancing NATO’s capacity to strengthen democratic institutions within NATO member, partner, and aspirant countries.”

So who could possibly be against that? As it turns out, zero Democrats and 63 Republicans (out of 206 voting). And of those 63 Republicans, two out of four U.S. House members from Virginia, namely far-right/insurrectionist Rep. Bob Good (R-VA05) and also-horrendous Rep. Ben Cline (R-VA06). So that pretty says it all about those guys…and about the other Republicans who voted no on this resolution of support for NATO. 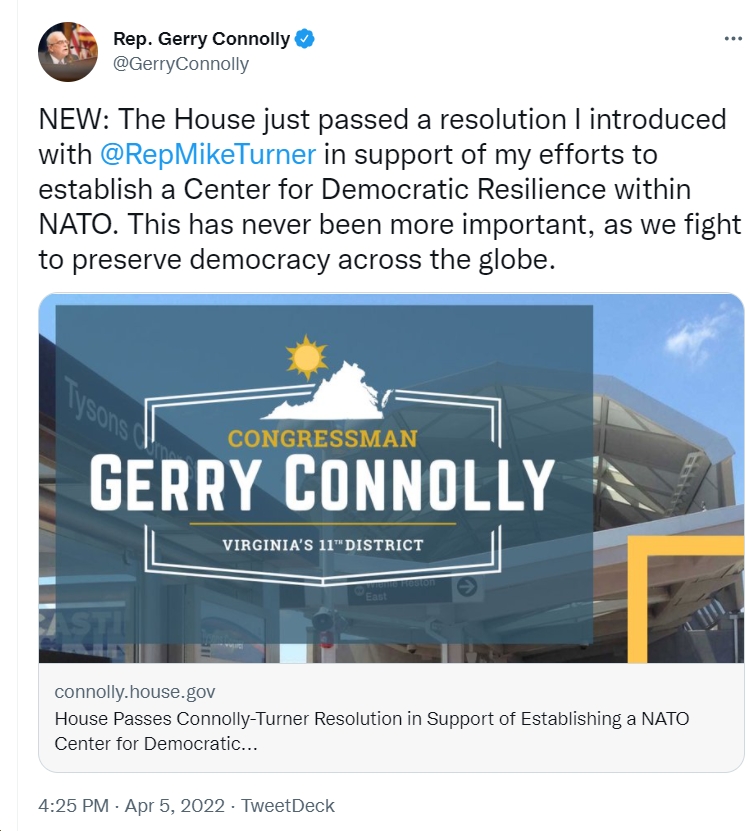 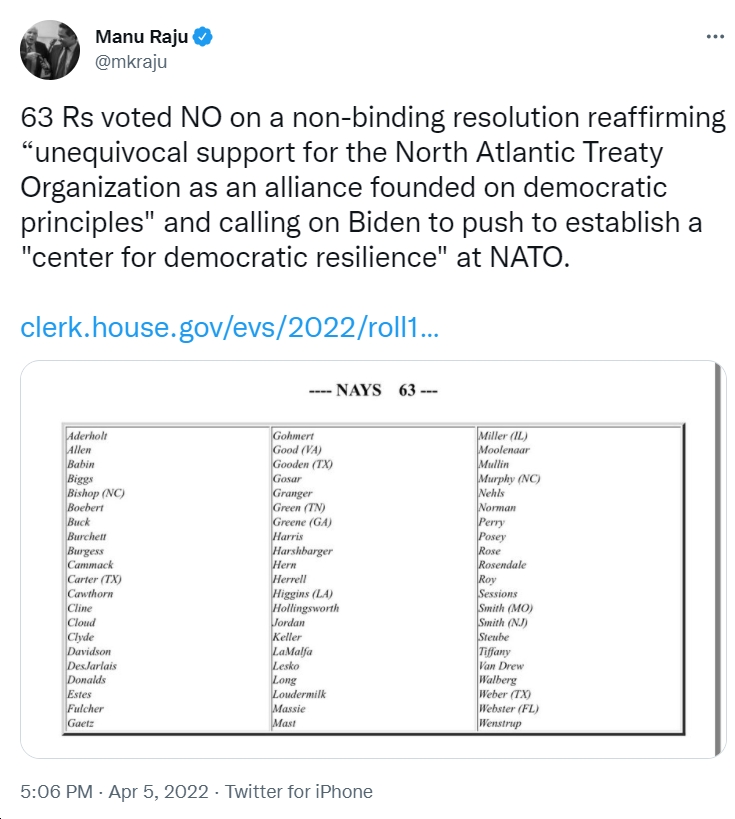 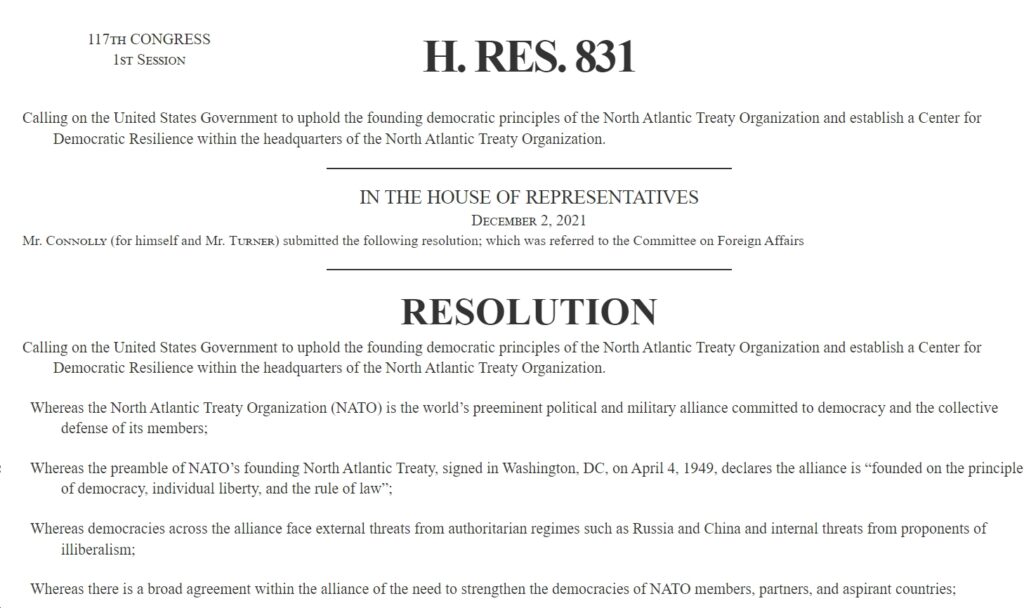 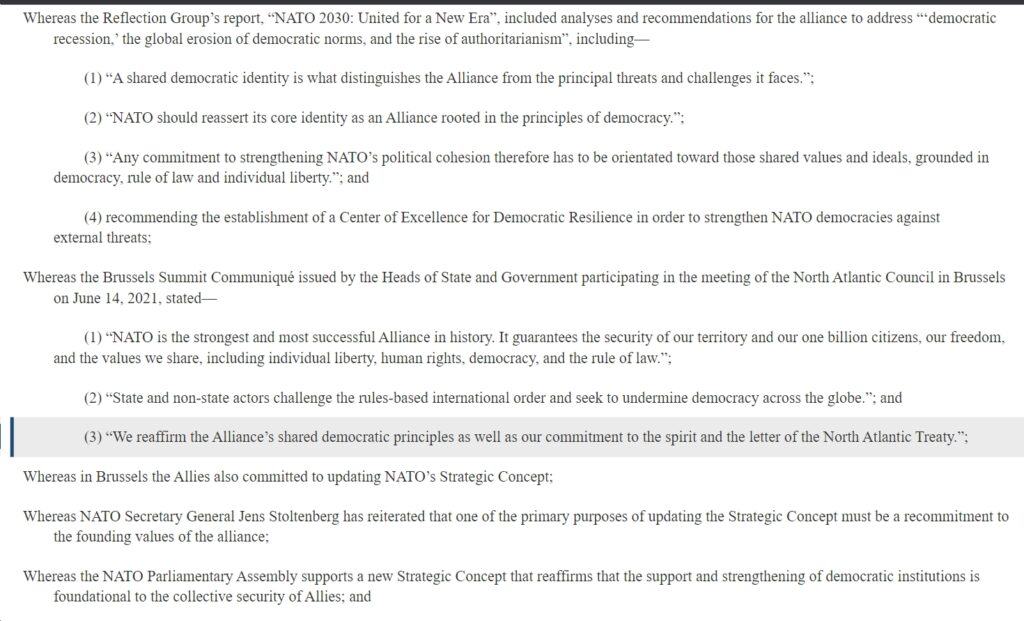 Today, the House passed H.Res. 831, a resolution in support of the establishment of a Center for Democratic Resilience within NATO to help member, partner, and aspirant states strengthen their democratic institutions and to preserve democracy around the globe. The resolution was introduced by Congressman Gerry Connolly (D-VA), President of the NATO Parliamentary Assembly, and Congressman Michael Turner (R-OH), a former NATO PA President. Passage of the resolution comes ahead of the NATO PA’s Standing Committee meeting in Athens, Greece.

Connolly first proposed the creation of a Center for Democratic Resilience within NATO in 2019—a recommendation then endorsed by the NATO Parliamentary Assembly as a whole. In 2020, the independent Group of Experts on NATO 2030 supported the concept in their recommendations to the NATO Secretary General. In April 2021, the Assembly established a Working Group to advance the proposed concept for the Center. Speaker Nancy Pelosi endorsed the proposal in October 2021, while in Lisbon, Portugal for her acceptance of the NATO PA’s inaugural Women in Peace &  Security Award. The bipartisan U.S. delegation to the NATO PA has also encouraged Secretary of State Antony Blinken and Secretary of Defense Lloyd Austin to build support among Allies for the Center.

“Our commitment to shared democratic values is what distinguishes NATO from other military alliances,” said Connolly. “Without it, NATO is just another military block that does not like Russia. But this commitment cannot remain purely aspirational or rhetorical. It must be operationalized. This is why we believe that we need formal architecture in NATO itself. There are divisions and units within NATO dedicated to collective defense, terrorism, hybrid warfare, cyber, climate change, and all other security challenges. But after 72 years, there’s not even a broom closet in NATO headquarters dedicated to democratic institution building. This Center is long overdue. I want to thank my friend, Mike Turner, for his collaboration on this important resolution.”

The objectives of the Center for Democratic Resilience could be:

Text of the resolution introduced by Connolly and Turner is available here.