A few minutes ago, Sen. Mark Warner posted a Twitter thread on the Electoral Count Act reform bill he’s involved in trying to get passed by the US Senate. According to Sen. Warner:

“…I think it’s a positive step for American democracy…the bill would reform an 135-year-old law that former President Trump exploited to try and have Congress overturn the 2020 election. There’s bipartisan consensus that this act is way out of date – even Sen. McConnell has said it needs to be fixed. One of the most critical provisions of our Electoral Count Act reform bill requires 1/5 of Senators AND House members to challenge a state’s electoral count – so just a few fringe representatives can no longer sow distrust in our democratic institutions. It will also prevent the “alternate slate of electors” strategy that Trump sought by making governors responsible for submitting their state’s electors. And while VP Pence did the right thing by refusing to throw out the election results, we need to reform that system. Our bill would eliminate the influence of the VP so no one will think they have that power moving forwards. We also have another bill that will increase penalties for threatening election workers, help USPS handle election mail, and more. I’d like to have gone farther, but this represents a good start towards preventing future events like Jan. 6 and restoring trust in our elections.”

Sounds great, right? Except that, according to Marc Elias – who knows more about this stuff than just about anyone – “Congress has the authority to make changes and enact a law that will improve the ECA to safeguard free and fair elections. Unfortunately, the Electoral Count.” Why not? Elias explains his reasoning in this article, which argues:

“…the proposed legislation aims to be more ambitious, and the result is a bill that — in its current form — is not ready for enactment. Lacking precision in critical areas, the bill feels less like the product of legislative compromise and more like something constructed in a law school faculty lounge. And it is impractical in ways that practicing lawyers would recognize, but Washington think tanks might ignore.”

Uh oh, now THAT does not sound good at all. But wait, it gets worse; Marc Elias continues:

“Despite its preference for federal courts, the new bill fails to provide any legal standard for a court to use to overturn a governor’s conclusive certification. One would hope that a federal court would overturn the results in a particular state if the “Big Lie” governor, for instance, certified the presidential candidate who received fewer lawful votes than the candidate who actually won.

OK, so after reading what Sen. Warner had to say, I was strongly leaning towards supporting this legislation. But after reading Marc Elias’ analysis, I’m now at best undecided, at worst against this bill. One thing’s for sure: this is not something we want to get wrong! What do you think? 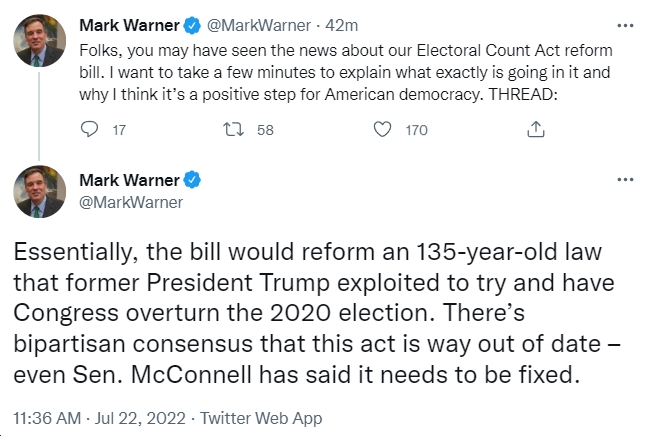 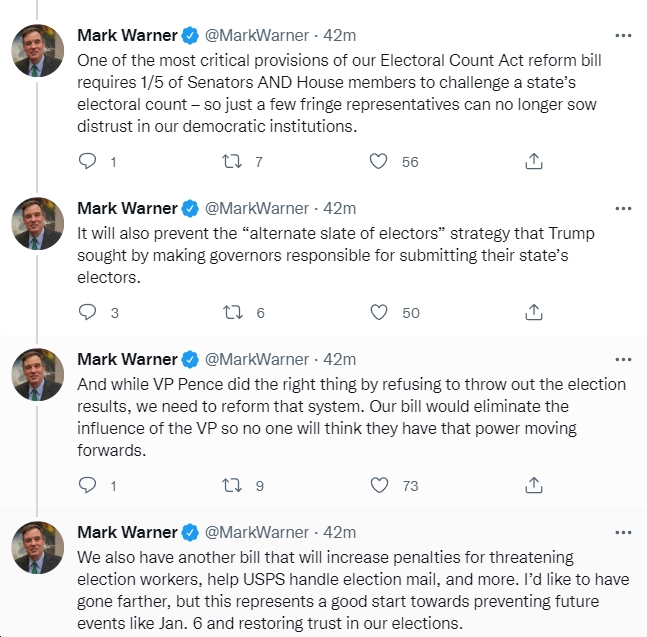 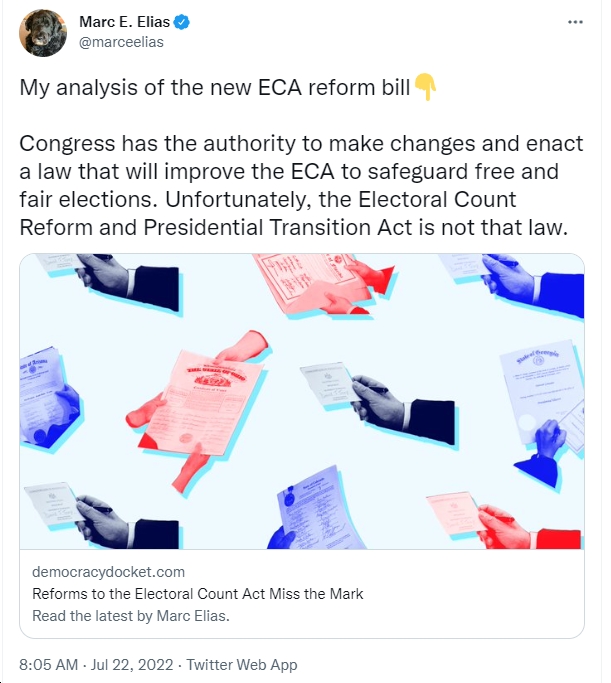