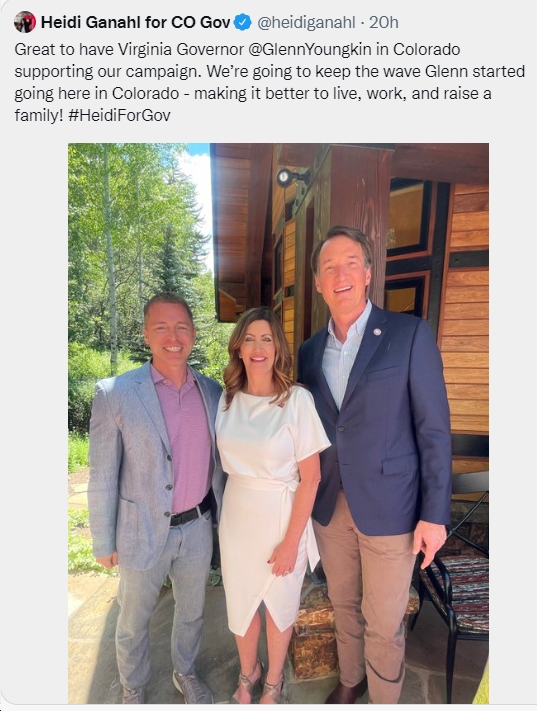 Yesterday, Gov. Glenn Youngkin flew out to Colorado to campaign for Colorado Republican nominee for governor, Heidi Ganahl. Who is Heidi Ganahl?

Check out the gory details:

“Ganahl considers herself to be a supporter of former president Donald Trump. Ganahl has declined to state if the results of the 2020 presidential election are legitimate. After the 2020 presidential election, Ganahl praised John Eastman, a controversial lawyer who incorrectly claimed that Kamala Harris is not an American citizen and wouldn’t be eligible to be Vice President. Eastman also helped Trump in his attempts to overturn the election results.

Ganahl is opposed to proposals offering tuition-free enrollment in community colleges. In regards to sexual assault on campus, Ganahl has acknowledged it as a serious issue but has downplayed its prevalence, saying “Twenty-eight percent of students at CU said that they had been sexually assaulted, but it included all kinds of things like inappropriate touching, and catcalling, etc. ‘I think the actual rape number was nine percent […] it’s still nine percent too many. But you know, that’s self-reported, so.’

Ganahl has claimed that conservatives at colleges are being ‘silenced’ and has attempted to form organizations that promote conservative viewpoints on-campus.”

As of that’s not bad enough, Ganahl just announced her pick of an *election denier* named Danny Moore as her running mate! According to the Denver Post, Moore “previously served as chair of the state’s Independent Redistricting Commission that redrew the Colorado congressional map,” but…

“…was removed from that position — though not from the commission altogether — by his colleagues in April 2021 due to controversial comments he’d made on Facebook. Among his posts: falsely claiming that President Joe Biden was not ‘elected by the people,’ but rather ‘elected by the Democrat steal’; claiming without evidence that mail-in ballots can increase fraud; and calling on Republicans to use the court system to ‘erase those gains’ made by Democrats in 2020.”

The selection of Moore is the latest example of Ganahl embracing far-right conspiracists. She’s now working on this campaign with top associates of former President Donald Trump, Brad Parscale and Boris Epshteyn, and she recently appeared on Steve Bannon’s show, WarRoom. Ganahl, an elected University of Colorado regent, has consistently declined to condemn John Eastman, the former CU visiting professor who was central in the plot to overturn the legitimate results of the 2020 election.

At many points during her winning primary campaign, she refused to say whether she felt Joe Biden was legitimately elected and chastised journalists for asking her about it.

In short, Ganahl is an extremist, “Big Lie” promoter and all-around nutjob.  A few more items to consider about this candidate who Glenn Youngkin campaigned for yesterday:

Nightmarish. Yet Glenn Youngkin was busy campaigning for this extremist nutjob yesterday? Maybe the media should stop pretending that Youngkin’s some sort of “moderate,” “sane” Republican, non-Trumpist, blah blah blah?