See below for statements by Virginia’s U.S. House Democrats regarding the passage a little while ago of “H.R. 8404, the Respect for Marriage Act, to protect marriage equality for same-sex and interracial marriages.” The vote was 267-157, with all Democrats – obviously – voting YES, joined by 47 Republicans (157 Republicans voted NO, including all four Virginia anti-LGBTQ Republicans – Rob Wittman, Bob Good, Ben Cline and Morgan Griffith…of course). 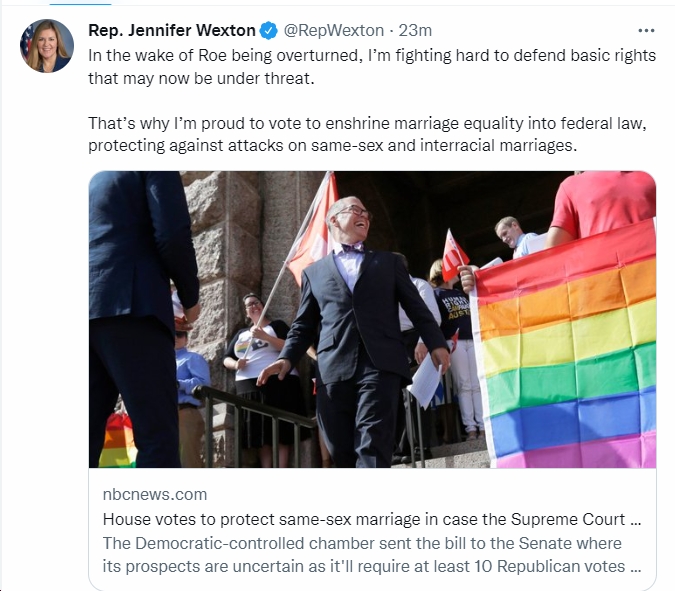 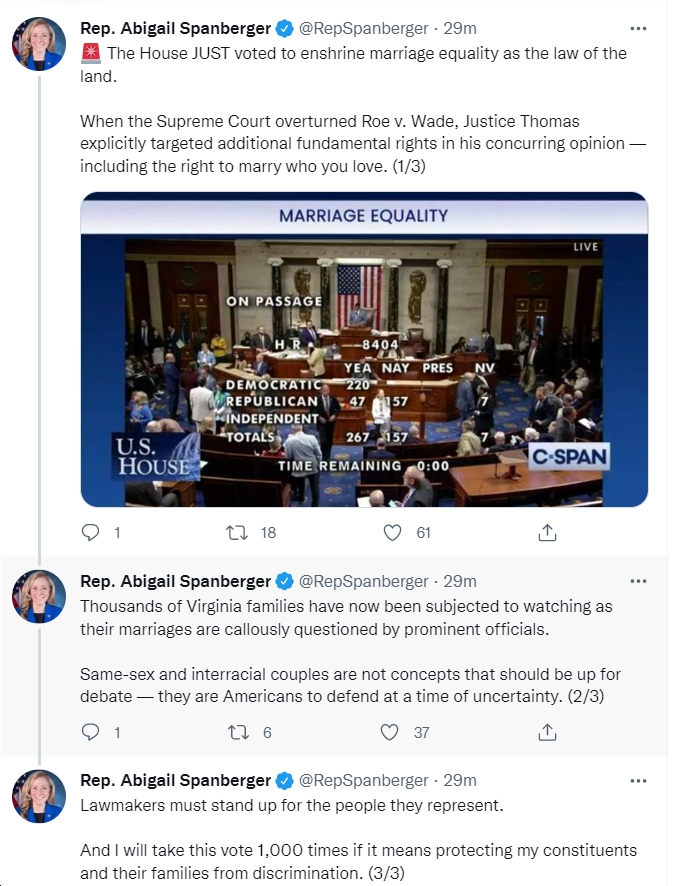 The “Respect for Marriage Act” Would Repeal DOMA, Enshrine Marriage Equality, & Provide Legal Protections for Married Couples Across the Country

WASHINGTON, D.C. — U.S. Representative Abigail Spanberger today voted with a bipartisan majority of the U.S. House to protect the rights of same-sex and interracial couples.

While marriage equality remains constitutionally protected, the Supreme Court’s ruling in Dobbs v. Jackson could be used in the future to threaten other fundamental rights — including the right to marriage equality. In his concurring opinion in Dobbs, Justice Clarence Thomas explicitly called for the Supreme Court to reconsider its decisions protecting other fundamental rights — including the right to same-sex marriage recognized in Obergefell v. Hodges. The right to interracial marriage also relies on the same constitutional doctrines as the right to same-sex marriage — therefore leaving it also vulnerable to a legal challenge.

Spanberger cosponsored and voted to pass the Respect for Marriage Act, which would enshrine marriage equality for same-sex and interracial couples as guaranteed by Obergefell vs. Hodges and Loving v. Virginia. The bill would also provide additional legal protections for marriage equality.

“Following the overturning of Roe v. Wade, thousands of Virginia families have been subjected to watching their marriages now being callously questioned by prominent officials. Same-sex and interracial couples are not concepts that should be put up for debate — they are Americans to defend at a time of uncertainty,” said Spanberger. “This moment requires lawmakers to stand with the people they represent, because if decisions like Obergefell v. Hodges and Loving v. Virginia come under threat in the wake of Dobbs, the consequences could be devastating for far too many Americans — including in Virginia. Today, I proudly voted to stand with same-sex couples, interracial couples, and their loved ones —and I will take this vote 1,000 times if it means protecting these constituents and their families from discrimination.”

The Respect for Marriage Act would: 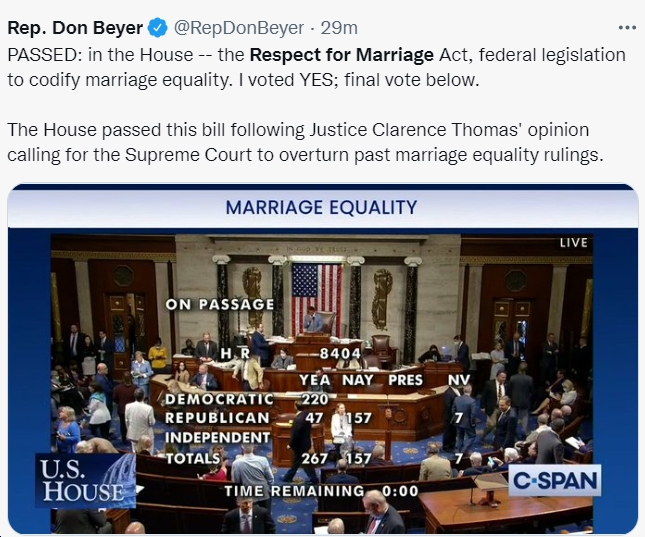 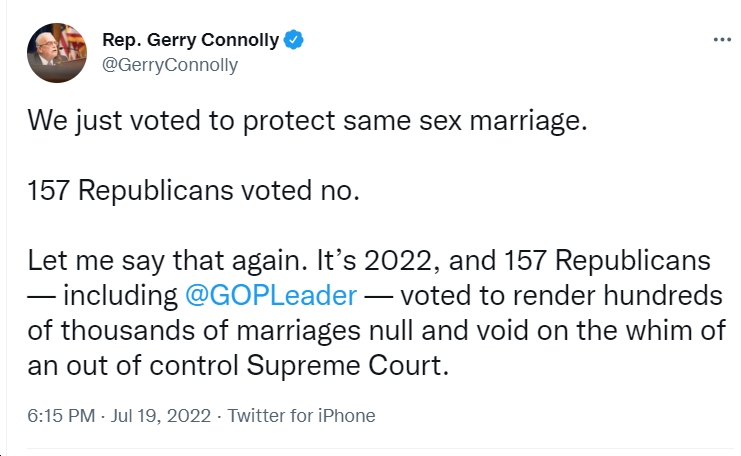 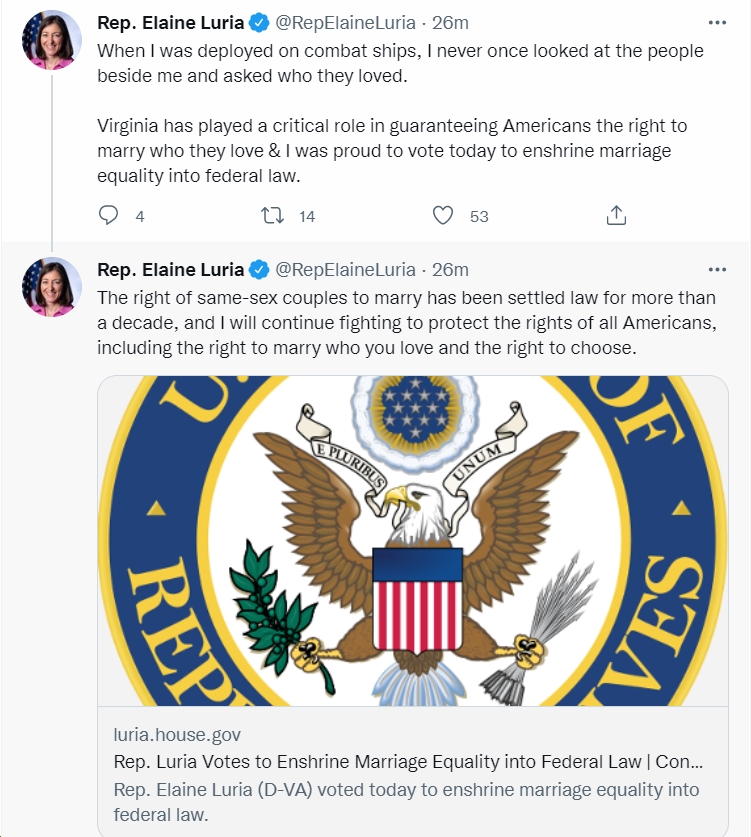 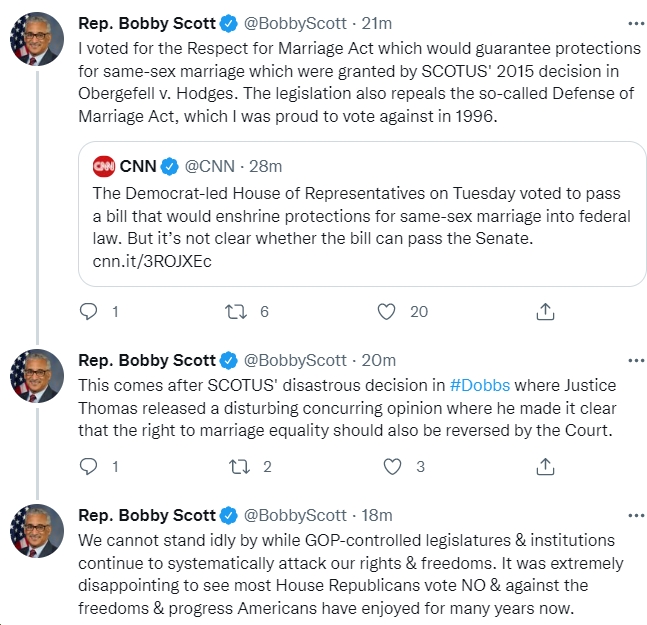 After Virginian-Pilot Calls Him Out in Editorial, “LGBTQ Americans need public support against efforts to erase them” VA Del. Tim Anderson (R) Goes on...