The 2022 midterms are over (well, sort of…still some uncalled races outside of Virginia), and we’re already off and running for 2023.  Already this morning, Loudoun Dems Chair Lissa Savaglio announced her candidacy for the Loudoun County Board of Supervisors, Little River District. And, as you can see below, Fairfax County School Board member Laura Jane Cohen has now announced her candidacy for Virginia House of Delegates in the new 15th district (Burke/Springfield area of Fairfax County; won by Terry McAuliffe in 2021 with 61% of the vote, so very “blue”). At present, Cohen is the only announced candidate – Democratic or Republican – for this seat, but it wouldn’t be at all surprising if others throw their hats in the ring.

As for Laura Jane Cohen, she’s been on the Fairfax County School Board since 2019, after defeating far-right-Republican Elizabeth Schultz, who is now – horrifyingly – in the Youngkin administration as Assistant Superintendent of Public Instruction. If Laura Jane Cohen’s elected to the House of Delegates, it will be interesting to see if she butts heads with (and beats) Schultz once again. I’ll also be curious to see if service on the School Board ends up as a net political positive or negative, given everything that’s happened the past few years – COVID, assaults on public education by Youngkin et al, ginned-up outrage over “CRT” and “transgender kids in bathrooms,” etc. Recently, for instance, Cohen’s Fairfax School Board colleague Karl Frisch ran for the seat created by Del. Mark Keam resigning to join the Biden administration, and…lost. Now, that might not have had anything to do with Frisch being on the School Board, or…maybe it did? 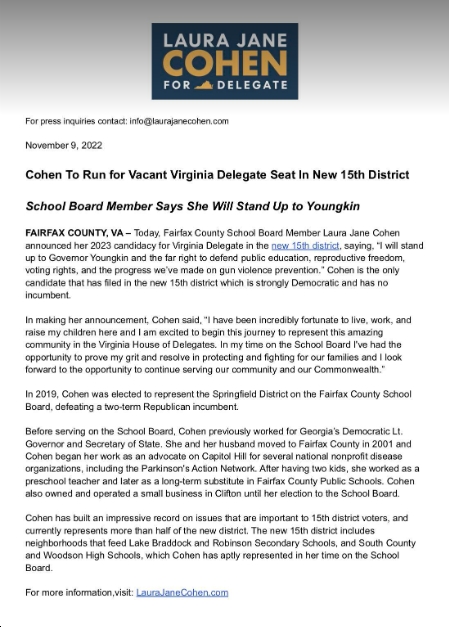