Last week, Arlington/Falls Church Commonwealth’s Attorney Parisa Dehghani-Tafti, who was first elected in 2019, announced her campaign for another four-year term. In that announcement, the progressive/reform prosecutor argued that, “In just 3 years, in the midst of a global pandemic, in the face of a right-wing recall campaign and constant resistance from opponents of reform, I’ve kept my promises and together we’ve achieved extraordinary progress.” Dehghani-Tafti also listed a bunch of endorsements, including Rep. Don Beyer (D-VA08), Del. Patrick Hope, Sen. Scott Surovell, Sen. Jennifer McClellan, former Del. Jennifer Carroll-Foy, Arlington County Board members Takis Karantonis and Matt de Ferranti, etc. – an impressive list.

However, as I hinted at in that post, Dehghani-Tafti has now drawn a Democratic primary challenger, as you can see in the following email from her former Deputy, Josh Katcher (who also worked in that office when it was headed by Theo Stamos, who Dehghani-Tafti defeated in June 2019). According to Katcher, he is “running because my opponent Parisa Dehghani-Tafti has not only broken her promises on reform prosecution, she also has broken the office in the process.” And, he argues, “Every victim, defendant, and witness who comes through the doors of the courthouse deserves a Commonwealth’s Attorney that delivers Real Reform and Real Justice.”

Now clearly, Dehghani-Tafti and her supporters will dispute this characterization, and it remains to be seen whether Katcher’s argument will gain traction with Arlington’s Democratic voters. Also, it’s worth noting that, in general, it’s VERY hard to defeat an incumbent, but that when this DOES happen it’s usually because there’s been some sort of major failing by the incumbent, and/or anger against the incumbent and/or a disconnect between the incumbent and the people who that incumbent represents. Is any of that the case in Arlington and Falls Church right now with regard to the Commonwealth’s Attorney’s office?  Got me. Also, of course, the challenger needs to be able to get their message out to the voters, which requires money, volunteers, etc. Will Katcher have those things? Again, got me. But sure, let’s have the debate and hear what these candidates have to say – that’s all to the good, IMHO, in a democracy – and let the voters decide which vision, and which candidate, they find more appealing. 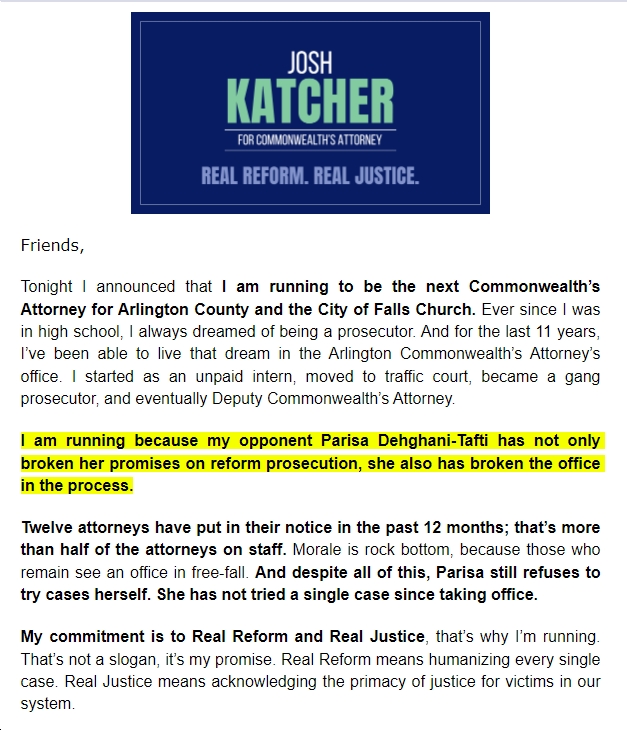 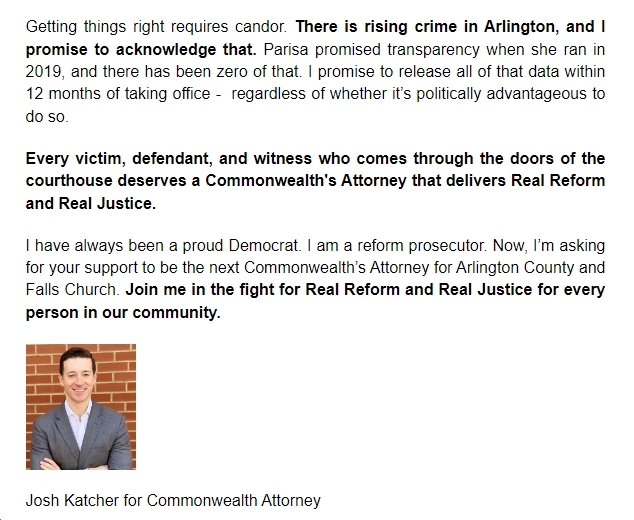