Since the last time we checked in with the mayor’s election in Fairfax City, what we’ve seen is a continuation of right-wing Republican mayoral candidate Sang Yi and the other Republicans he recruited to run for city council spinning the dishonest narrative that this race is somehow “non-partisan,” and that they are the true, independent candidates. Of course, given the “blue” political makeup of Fairfax City (Terry McAuliffe won it with 63.7% last year; Joe Biden got 68.0% in 2020; Gerry Connolly won 67.2% in 2018) – it’s no surprised that Yi and other Republicans would try to pull the wool over voters’ eyes. In short, Yi and others saying the word “nonpartisan” over and over again is really saying “we’re Republicans but don’t want to admit it because we know that would be politically disastrous.”

Case in point for this effort to mislead Fairfax City voters: on October 24, many residents received a postcard from a number of current and former elected officials asking residents to “remain nonpartisan”.  The signatories (see below) argue that their reason for this plea is the  Hatch Act – namely that “Career Federal employees with significant leadership experience have been able to serve our City Council and School Board. Otherwise, they would be barred by Federal law — the Hatch Act.” This, despite the fact that somehow, the Hatch Act didn’t prevent Sang Yi from holding a high dollar fundraiser with *Republican* governor Glenn Youngkin, or from raising over $100,000 largely from Republican donors.  In other words, Yi’s strategy has been to appeal to the city’s Democratic voters by arguing that he’s “nonpartisan,” while hiding the fact that he’s funded heavily by Republicans, and that he works in Congress for the extremist agenda of House Republicans. 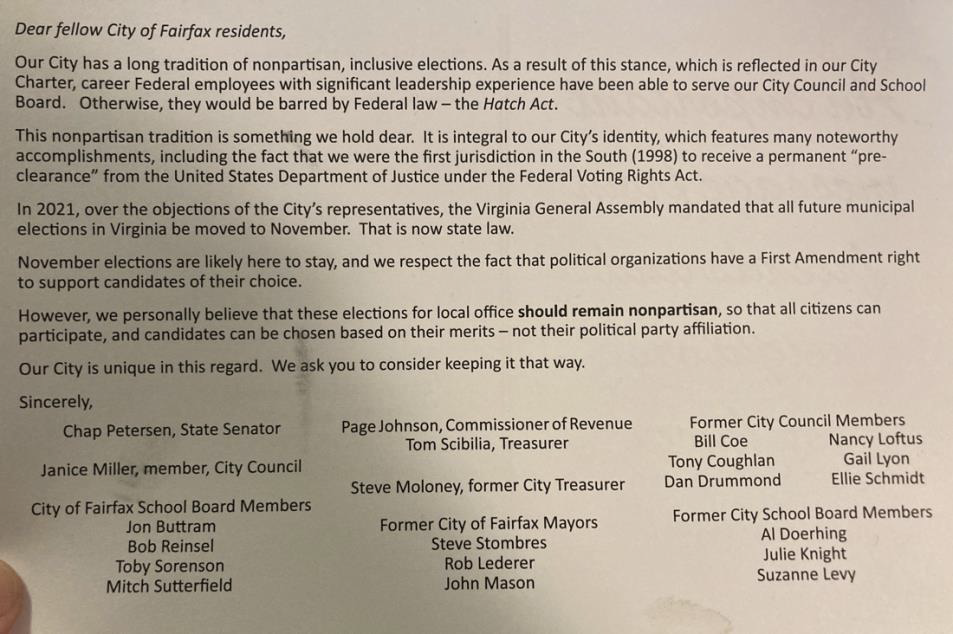 The disingenuous “nonpartisan” narrative as a cover for Yi’s extreme conservatism does not stop there.  As the Patch reported, on Saturday, October 29 and Saturday November 5, Matt Stoeckel of Executive Press Inc. (a GOP print shop) stood outside of Fairfax City Hall distributing “nonpartisan/independent” sample ballots to voters.  Nancy Frye Loftus (a Republican and attendee at Yi’s fundraiser) joined him on November 5th in distributing the ballot.  Matt Stoeckel and his wife Becky – who is the chairperson of the Fairfax City GOP, no less! – also were part of the finance committee for Sang Yi’s fundraiser on June 24.  I’m told that, although Matt Stoeckel confirmed his company printed the “concerned citizens” postcard, they denied copying the “nonpartisan” sample ballot.  The ballot’s authorization statement says it’s from “concerned citizens of Fairfax City,” which I’m told would be a violation of election law if they intend to influence the outcome of an election but have not registered as a PAC.  And, apparently, they were told by the Fairfax City Registrar that if they continued distributing it, they risked complaints being filed – but they continued doing so.  This sure seems like another moment where the GOP doesn’t truly respect the rule of law. 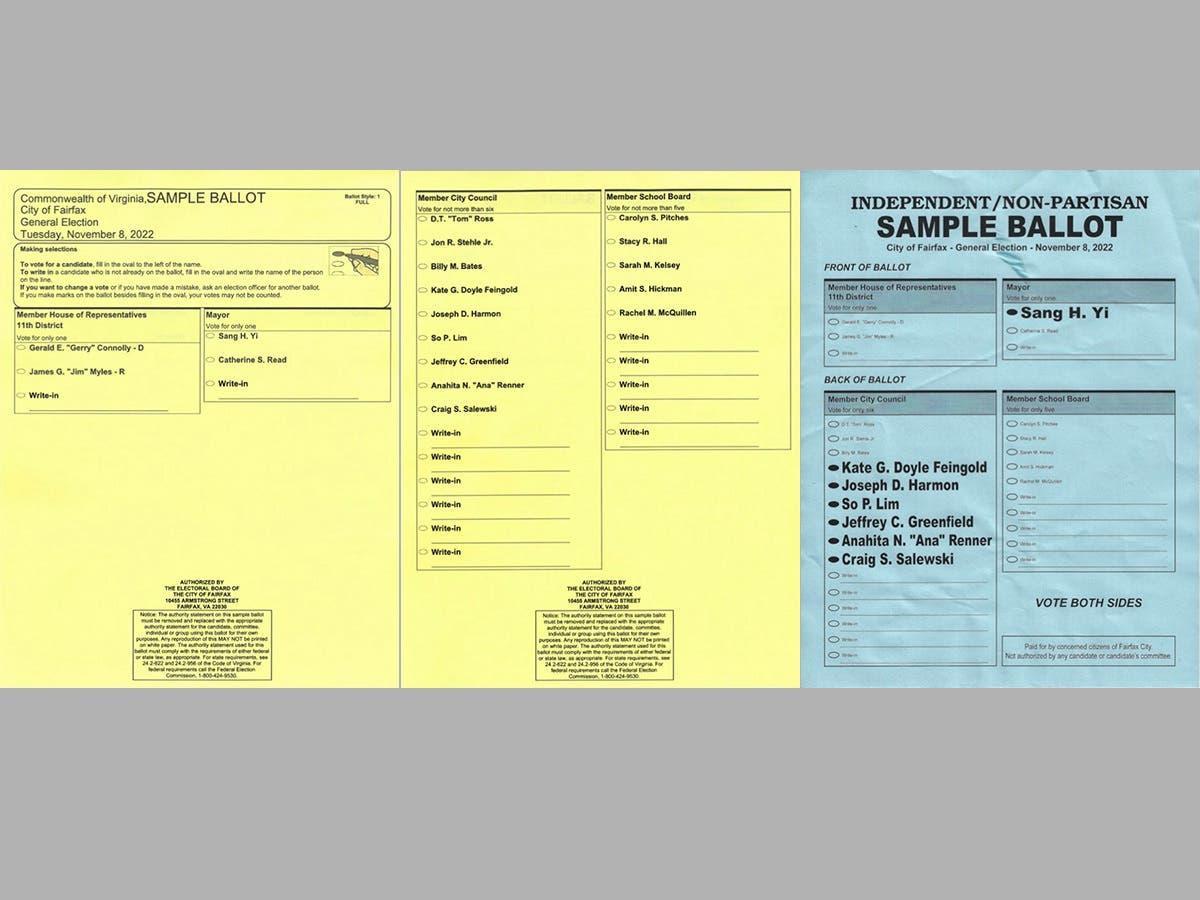 Meanwhile, Sang Yi’s campaign continues to try and hide his Republican connections.  Recently, for instance, a recording surfaced of the far-right Fairfax GOP’s “Conversations that Count” from May 2021, featuring…yep, you guessed it – Sang Yi.  More evidence:  Sang Yi also attempted to scrub his connections to House Republicans on Legistorm so voters have a more difficult time finding out what he’s really been up to on the Hill.

But wait, you might ask, even if Sang Yi’s a right-wing Republican, has he acted like one on the City Council since 2018? Well…yes, actually! For instance, check out this video by Catherine Read’s campaign, which explains that Yi has voted “no” on proposed ordinances over 75 times (!) since he’s been on Council, and voted down every budget for four years in a row.  Is that really the kind of “leadership” Fairfax City needs?  The fact is, a budget represents the city’s spending priorities for the year, yet Yi has not been able to bring himself to support the budget a single time while he’s been in office.  This is not encouraging at the minimum, and at worst it suggests that Yi’s first priority as Mayor would be to cut the budget. Fairfax City residents should be concerned about this, specifically what kind of cuts Yi plans to make – and from which of the crucial city services (education? roads? public safety? other?) they rely upon.

Another moment to pay attention to is the March 1, 2022 work session in which Yi made the following comment about public schools:

“….When you start reaching numbers at $17,850 per student…yeah, there are other services like transportation that you have to account for, but geez…you could take every single 2,884 students in the City of Fairfax and give them all a private education.  We could probably find private schools that are cheaper and just outsource the thing and we wouldn’t even have to pay for the buildings.  It starts becoming untenable…”

What on earth is THAT all about? We don’t know for sure, but it sounds like it’s right from Glenn Youngkin playbook of siphoning funding away from public schools and into private schools, private school “vouchers,” etc.

A few more points/takeaways from this race: