Boysko Campaigning Hard in the 86th 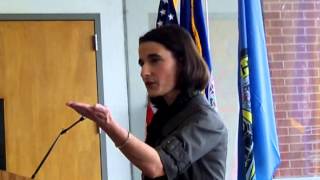 "He's not putting the residents of this community first," Boysko said. "He's doing what his party tells him to do, and I don't think that's acceptable."

Boysko favors finding a dedicated source of transportation funding, and opposes Gov. McDonnell's plan to use general-fund money for transportation, saying that doing so would deprive other state programs of the funding they need.

Boysko has spent much of her life in public service, starting as an aide to U.S. Sen. Richard Shelby when he was a Democrat. Later, she worked at the government-relations firm of Bayless, Boland, Madigan and Barrett Inc. Boysko left the workplace to raise her two daughters, but she remained an active volunteer in Democratic campaigns. She was Virginia director for the 2004 presidential campaign of former Vermont Gov. Howard Dean. Boysko said she was attracted to Dean's record as governor of balancing budgets and cutting taxes, while instituting innovative state health care initiatives.

If Democrats are willing to tolerate a lobbyist as state party chairman, at least he won't be abusing elected office to feather his nest in the way Virginia House Speaker Bill Howell (R-28th) does without chagrin. Howell has lobbied for years to indemnify a corporate donor from lawsuits.

A member of the American Legislative Exchange Council (ALEC), a non-partisan, ideologically conservative, non-profit 501(c)(3) membership association of state legislators and private sector policy advocates (translate corporations), Howell has been pushing a bill that would help protect a single company (Crown Cork & Seal) from asbestos lawsuits. He has used his position and influence in an attempt to bully and maneuver the bill to passage.

Two years ago, Crown Cork spent $25,095 on four lobbyists to help get the bill passed, according to state records. Last year, it spent $84,167 on seven lobbyists. This year, they had the same seven lobbyists, though one left to work for newly elected Republican Gov. Robert F. McDonnell. - Washington Post